The Disbelief of Tiresias: Oedipus’ Downfall 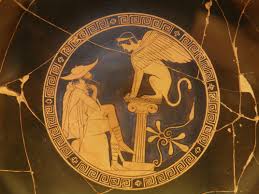 By disbelieving Tiresias, Oedipus guaranteed his own downfall in the tale of Oedipus Rex. Analysis of the story often focuses on the tragedy of Oedipus, who unknowingly murdered his own father and married his mother.

The idea of fate is often discussed and the role the gods may have played in Oedipus’ personal horror story. Little attention is paid, however, to the one person who spoke the truth to Oedipus.

The unadulterated truth spoken by Tiresias might have been painful for Oedipus to bear, but he could have saved himself a great deal of anguish had he paid more than lip service to his seer.

Who Is Tiresias in Oedipus Rex?

The blind seer in Oedipus is more than a simple prophet. Tiresias in Oedipus Rex is an important literary tool that is used as both a backdrop and a contrast to Oedipus himself. While Tiresias brings the truth to Oedipus, he refuses to reveal it until he is threatened and ridiculed.

Oedipus, who claims to seek the truth, does not truly want to hear what Tiresias has to say. Tiresias is fully aware of Oedipus’ temper and his response to the news the prophet brings him, and so refuses to speak.

Tiresias is a recurring character who appears in several of Homer’s plays. He comes to Creon in Antigone, and even appears to Odysseus as he travels from the end of the Trojan war to return to his beloved home in Ithaca.

In every case, Tiresias is met with threats, abuse, and insults as he provides the prophecy revealed to him to the various characters. Only Odysseus treats him with courtesy, a reflection of Odysseus’ own noble character.

No matter how his prophecies are received, Tiresias is consistent in his delivery of unadulterated truth. He has been given the gift of prophecy, and it is his job to pass the information the gods give to him along. What others do with the knowledge is their own burden to bear.

Unfortunately for Tiresias, he is often met with abuse, threats, and suspicion, rather than the respect he has earned, both as a seer and as an elder advisor to the King.

As the play opens, Oedipus surveys the people gathered at the palace gate, mourning the losses brought on by a terrible plague on the City of Thebes. 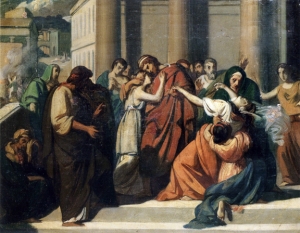 Oedipus questions the Priest and responds to the lament of the people, claiming his own horror and sympathy of their plight, and that he is doing all he can to alleviate their suffering:

“Ah! my poor children, known, ah, known too well, The quest that brings you hither and your need.

Ye sicken all, well wot I, yet my pain, How great soever yours, outtops it all. Your sorrow touches each man severally, Him and none other, but I grieve at once Both for the general and myself and you.

Therefore ye rouse no sluggard from day-dreams. Many, my children, are the tears I’ve wept,

And threaded many a maze of weary thought. Thus pondering one clue of hope I caught,

And tracked it up; I have sent Menoeceus’ son, Creon, my consort’s brother, to inquire

Of Pythian Phoebus at his Delphic shrine, How I might save the State by act or word.”

As he finishes his speech, Creon approaches to give the prophecy to the King and save Thebes from the plague. Creon reveals that the cause of the plague is that those responsible for King Laius’ death still live.

They must be found and either banished or put to death to end the plague and save the kingdom. Oedipus says that he had “heard as much, but never saw the man,” indicating that he knew of Laius but had not met him when he became king of Thebes.

He declares that the crime must be solved but laments the possibility of finding clues after so long. Creon assures him the gods have declared that the answers may be found by those who seek them. The prophecy given to Creon uses some very specific and interesting language:

“In this land, said the god; ‘who seeks shall find; Who sits with folded hands or sleeps is blind.'”

This is some ironic foreshadowing of what is to come between the King and the prophet who tries to bring him the information he needs. Oedipus demands to know why the murderers were not found immediately.

Creon responds that the sphinx arrived with its riddling around the same time and took priority over locating the killers of the king. Oedipus, angry with the thought that anyone would dare attack the king, and remarking that the killers may come next to attack him, declares that he will avenge the fallen king and save the City.

A Blind Man Who Sees the Future?

Tiresias in Oedipus the King is a well-respected seer, one who has advised the royal family before in matters of importance regarding the will of the gods. 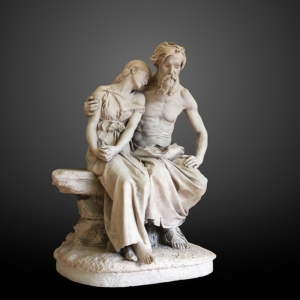 There are varying backstories to how Tiresias became blind. In one tale, he discovered two snakes coupling and killed the female. In vengeance, the gods transformed him into a woman.

After a very long time, he discovered another pair of snakes and killed the male, earning himself a return to his original form. Sometime later, as the gods were arguing over who enjoys sexual activity more, men or women, Tiresias was consulted because he had experienced the act from both perspectives.

He responded that the woman has the advantage of gaining three times the pleasure. Hera, furious with Tiresias for revealing the secret of a woman’s enjoyment of sex, struck him blind. Although Zeus was unable to reverse Hera’s curse, he gave him the gift of prophecy as a reward for speaking the truth.

At the beginning of Oedipus and Tiresias’ conversation, Oedipus praises the seer for his past service to Thebes:

“Teiresias, a seer who comprehendest all, Lore of the wise and hidden mysteries, High things of heaven and low things of the earth, Thou knowest, though thy blinded eyes see naught, What plague infects our city; and we turn To thee, O seer, our one defense and shield. The purport of the answer that the God Returned to us who sought his oracle.”

As the blind prophet in Oedipus’s eyes is a welcomed guest, he is introduced with praise and welcome. Within a few lines, however, he is no longer the trusted seer Oedipus expected.

Tiresias laments his misfortune, saying he is cursed to be wise when there is no good to come of his wisdom. Oedipus, confused by his declaration, asks him why he is so “melancholy.” Tiresias responds that Oedipus should allow him to return home and not prevent him, that they each should carry their own burden.

Oedipus is having none of it. To Oedipus, blind prophet Tiresias is neglecting his civic duty by refusing to speak. He asserts that any “patriot of Thebes” would speak whatever knowledge he has and try to help find the murderer of the King so that he can be brought to justice.

As Tiresias keeps refusing, Oedipus becomes incensed and begins to demand the information, insulting both Tiresias’ knowledge and his character. His temper escalates quickly as he makes demands of the seer, arguing against his assertions that the knowledge he carries will only bring heartbreak.

Tiresias rightly warns Oedipus that pursuing this particular knowledge will only bring him to ruin. In his pride and temper, Oedipus refuses to listen, mocking the seer and demanding he answer.

What Does Oedipus Accuse Tiresias of Doing? 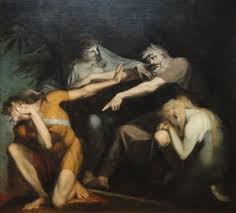 As Oedipus becomes angrier and angrier, he accuses Tiresias of conspiring with Creon against him. In his hubris and anger, he begins to believe the two are conspiring to make him look foolish and prevent him from finding the king’s killer.

After his bold declarations and his vow that the killer will be brought to justice or he himself will fall under a curse, Oedipus has backed himself into a corner. He has no choice but to find the killer or killers or be cursed by his own declarations.

He has promised the people that he will find the one who has destroyed their king and he is infuriated by the refusal of the prophet to tell him what he knows.

In a fit of temper, he mocks and insults Tiresias, accusing him of having no prophetic gift at all. Tiresias goaded into speaking, tells Oedipus outright that he is the very man he seeks.

This response outrages Oedipus, and he tells Tiresias if he were not blind, he would accuse him of the murder. Tiresias responds that he has no fear of Oedipus’ threats because he speaks the truth.

Although Oedipus has received the answer he sought, he will not accept it because pride and anger have made him more blind than the prophet himself. Ironically, Oedipus rejects Tiresias’ authority as a prophet, saying:

“Offspring of endless Night, thou hast no power O’er me or any man who sees the sun.”

Despite Oedipus’ ranting and his subsequent accusation of Creon of treason and conspiracy against himself, his pride leads him to a hard fall indeed. He tells Tiresias that his blindness extends to his ability in prophecy.

Tiresias responds that it is Oedipus who is blind, and they exchange a few more insults before Oedipus orders him out of his sight, accusing him again of conspiring with Creon.

Upon Creon’s return, Oedipus again accuses him. Creon responds that he has no desire to be king:

“I have no natural craving for the name Of king, preferring to do kingly deeds, And so thinks every sober-minded man. Now all my needs are satisfied through thee, And I have naught to fear; but were I king, My acts would oft run counter to my will.”

Oedipus will not hear Creon’s arguments until Jocasta herself comes and tries to assure him that Tiresias doesn’t know his art. In revealing the full story of Laius’ death to Oedipus, she seals his fate. She provides him new details, and finally, Oedipus is convinced that the seer told him the truth.

The blind prophet in Oedipus saw more than the King himself. The play ends in tragedy, as Jocasta, also realizing the truth, commits suicide. Oedipus, sickened and horrified, blinds himself and ends the play begging Creon to take the crown from him. Fate, in the end, favored the blind over the sighted.