In Tiresias, Antigone had a champion, one who, ultimately, failed to save her from the fate her uncle’s pride brought on. Tiresias, from his first appearance in the series in Oedipus Rex, is sought out but then rejected when he reveals the truth.

No matter how much praise the leaders heap on as he arrives and they’re seeking his prophecy, they immediately turn on him when he reveals truths they don’t want to hear.

Tiresias himself is irascible and not diplomatic in his presentation of his prophecies. Knowing that he will be ridiculed and rejected even before he speaks, he is not inclined to sugarcoat the truth.

He is the embodiment of Fate, the will of the gods, and holding such power makes him both hated and feared by the Kings to whom he offers his ability to discern the truth.

Who Is Tiresias in Antigone? 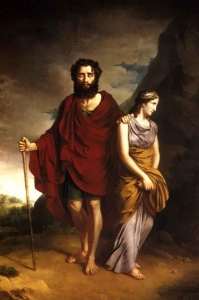 Who is Tiresias in Antigone? Tiresias is a prophet with a history of being reviled and ignored by those most in need of his advice and support. Although the kings in both plays revile him, Tiresias maintains his role. He refuses to back down, knowing that he is the spokesperson of the gods.

He is called upon in Oedipus Rex and ends up being threatened and driven from the castle as an enemy of the king. Although in Oedipus Rex, Tiresias was portrayed as an ally to Creon in his efforts to assist Oedipus, history seems to repeat itself in Antigone.

The play opens with a conversation between the sisters, Antigone and Ismene, two of Oedipus’ children. Antigone has called for Ismene to ask for her help. She plans to defy her uncle, Creon, the king, and bury their brother Polynices.

As the conversation unfolds, it comes out that the brothers fought one another for control of the kingdom. Eteocles, having gained the role of the king after the death of Oedipus, refused to share power with his brother Polynices.

Polynices, in response, joined forces with Crete and led an unsuccessful army against Thebes. The two brothers were both killed in the conflict. Now, the brother of Jocasta, Creon, has taken the crown. To punish Polynices for his treason, he is refusing to allow his body to be buried.

Antigone considers Creon’s actions rash and against the will of the gods. She plans to bury her brother against her uncle’s will. Ismene refuses to join her sister in her daring plot, fearing the king’s wrath and the promised death sentence for any caught trying to bury the body:

“We are only women, We cannot fight with men, Antigone! The law is strong, we must give in to the law In this thing, and in worse. I beg the Dead To forgive me, but I am helpless: I must yield To those in authority. And I think it is dangerous business To be always meddling.”

Antigone responds that Ismene’s refusal makes her a traitor to her family and that she does not fear the death Creon has promised. Her love for Polynices is greater than any fear of death. She says that if she dies, it will not be death without honor. Antigone is determined to carry out the will of the gods, regardless of consequences to herself:

“I will bury him; and if I must die, I say that this crime is holy: I shall lie down With him in death, and I shall be as dear To him as he to me.”

The pair part and Antigone carry out her plan, pouring out libations and covering Polynices with a thin layer of dust. Creon discovers that the body has been tended the next day and orders it moved. Determined, Antigone returns, and this time is caught by the guards.

How Does Creon Respond?

Creon’s temper is shown in the scene when the messenger approaches the first time. The messenger announces that he is not the one deserving of punishment, even before he announces the crime that has been committed. After a brief back-and-forth, Creon dismisses the man.

The same messenger returns almost immediately, this time leading the prisoner. He informs Creon that he’s no happier to be delivering Antigone to face her punishment but that by doing so, he’s saved his own skin.

Antigone is defiant, stating that her actions were pious and that Creon has gone against the will of the gods. She informs him that she is respected by the people for her loyalty to her dead brother, but that fear of him keeps them silent, saying:

“Ah the good fortune of kings, Licensed to say and do whatever they please!”

Creon, in a rage, sentences her to death.

Haemon, Antigone’s betrothed and Creon’s own son, argues with his father over Antigone’s fate. In the end, Creon relents to the point of sealing Antigone into a tomb rather than having her stoned, a less direct, but certainly as deadly sentence. Antigone is led away by the guards for her sentence to be carried out.

It is at this point that the blind prophet in Antigone makes his appearance. Tiresias comes to Creon to inform him that he is risking the wrath of the gods with his rash decision. Tiresias’ prophecy is that Creon’s actions will end in disaster.

How Does Sophocles Use of Tiresias Differ From Homer’s? 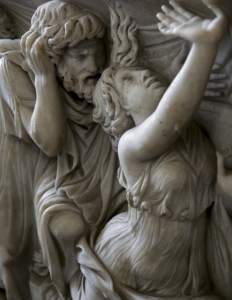 Any Tiresias character analysis should take into account his appearances in each of the various plays. Under both author’s pens, Tiresias’ character traits are consistent. He is irascible, confrontational, and arrogant.

Although Odysseus meets Tiresias when he calls him back from the afterlife, the advice he gives has similar results to any other time he appears in the plays. He gives Odysseus good advice, which is then ignored.

The role of Tiresias the prophet in Antigone is to be the rather reluctant mouthpiece of the gods. He speaks to Creon, fully aware of the response he will get from the king.

By now, Tiresias has been through Laius and Jocasta hearing his prophecy and failing to carry out any meaningful prevention, which has led to Laius’ death. With this, the prophecy came true, with Oedipus having unknowingly murdered his father and marrying his mother.

Tiresias was called upon by Oedipus to assist in the discovery of Laius’ murderer and was accused then of undermining the king in Oedipus Rex.

Tiresias, in Antigone, is not summoned but rather comes of his own will, confident in his position as a prophet and his relationship with the King. It was Tiresias’ prophecy in Oedipus Rex that indirectly gave Creon his throne, and now Tiresias comes to inform Creon of his folly.

Creon asks to hear his words, and Tiresias describes how he was alerted by the noise of the birds to seek the word of the gods. When he tried to burn a sacrifice, however, the flame refused to burn, and the offal of the offering rotted away seemingly without cause.

Tiresias describes this to Creon as a sign of the gods that they will similarly refuse any offering of the people of Thebes. The gods have been insulted by Creon’s refusal to give Polynices a proper burial, and now Thebes is in danger of falling under a curse.

How Does Creon Respond to the Prophet?

Creon starts by insulting Tiresias, claiming he must have been bribed to bring the prophecy to him and tell him he’s wrong in his treatment of Antigone. Although Creon answers Tiresias with insults at first, he reconsiders his behavior after Tiresias loses his temper.

“It seems that prophets have made me their special province. All my life long I have been a kind of butt for dull arrows of doddering fortune-tellers!” 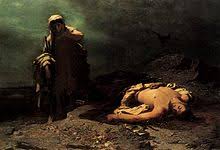 Tiresias answers that “wisdom outweighs any wealth.” Creon doubles down in his accusations, deriding not only Tiresias but all prophets, saying, “this generation of prophets has always loved gold.”

Tiresias tells Creon that his words aren’t for sale and that even if they were, he would find them “too costly.”

Creon urges him to speak anyway, and Tiresias informs him that he is bringing the fury of the gods down upon himself:

“Then take this, and take it to heart! The time is not far off when you shall pay back Corpse for corpse, the flesh of your own flesh. You have thrust the child of this world into living night,

You have kept from the gods below the child that is theirs: The one on a grave before her death, the other, Dead, denied the grave. This is your crime: And the Furies and the dark gods of Hell

Are swift with terrible punishment for you. Do you want to buy me now, Creon?”

With a few parting words, Tiresias storms out, leaving Creon to debate the situation, presumably with himself. Aloud, he speaks to Choragos, the head of the Chorus and their spokesperson. The internal debate that Creon engages in is expressed verbally through the conversation with the Chorus.

“Go quickly: free Antigone from her vault And build a tomb for the body of Polyneices.

And it must be done at once: God moves Swiftly to cancel the folly of stubborn men.”

Having realized his folly, Creon rushes to properly bury Polynice’s body and then to the tomb to free Antigone. Upon his arrival, he finds Haemon weeping over the body of his dead fiance. In despair of her sentence, Antigone hung herself. In a rage, Haemon picks up a sword and attacks Creon.

His swing misses, and he turns the sword on himself. He embraces Antigone and dies with her body in his arms. Creon, devastated, carries the body of his son back to the castle, weeping. He arrives to discover that the messenger that informed Choragos of the deaths was overheard by his wife, Eurydice.

In her fury and grief, she also has taken her own life. His wife, niece, and son are all dead, and Creon has nothing to blame but his own arrogance and pride. He has led away, grieving, and Choragos addresses the audience, making the final point of the play:

“There is no happiness where there is no wisdom; No wisdom but in submission to the gods. Big words are always punished, And proud men in old age learn to be wise.”