“Thyestes” is a tragedy by the Roman playwright Seneca the Younger, probably written late in his career, around 62 CE. One of the few of Seneca’s plays not obviously following a Greek original, and often considered his masterpiece, it tells the story of the rivalry between the twin brothers, Atreus and Thyestes, over the throne of the city of Mycenae, and its culmination when Atreus kills Thyestes’ two young sons and tricks him into eating them. 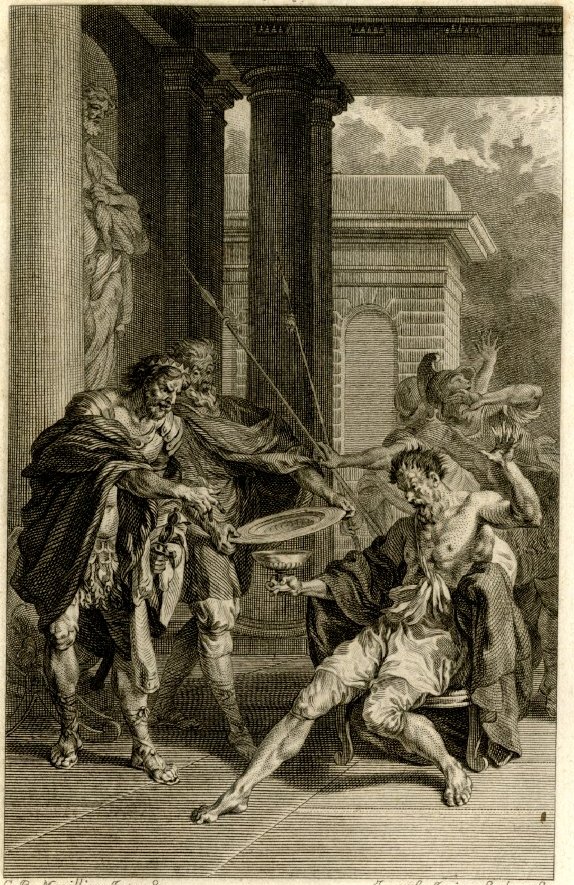 Megaera, one of the Furies, reminds the ghost of Tantalus (grandfather of Atreus and Thyestes) of the crimes, weaknesses and troubles afflicting the House of Tantalus, which include murder, incest, adultery, hubris and madness. She predicts that Thyestes will eat the flesh of two of his sons, served up to him by Atreus. Tantalus is horrified and repelled by his own palace and says he would prefer Hades. While Tantalus would like to restrain his children, Megaera is eager to urge them on. The Chorus of men of Mycenae relate the family’s crimes and the punishment of Tantalus and pray for an end to the crimes of the royal family.

Atreus works himself up into a vengeful rage against his twin brother, Thyestes, with whom he had been battling for the throne of Mycenae for some time, and who had also seduced his wife, Aerope (thus putting the paternity of his sons, Agamemnon and Menelaus, in some doubt). His attendant counsels restraint, but Atreus is arrogant and unrestrainable. He reveals his idea (in fact a repeat of the family history of Tantalus and Pelops before him) to kill his brother’s children and serve them up as a meal to their father. He also intends (against the advice of his ministers) to involve his own sons, Agamemnon and Menelaus, as agents in his crime by using them as emissaries to lure Thyestes back from exile to the palace with a pretence of reconciliation. The Chorus states its view of what a king should be, and hopes that harmony will return to the royal family with the return of Thyestes, expressing its ideal of a simple life in seclusion.

Thyestes returns happily and is greeted by his three sons. He no longer craves power, but instead longs for poverty, retirement and a quiet life. Although he is still wary and a bit confused at Atreus’ apparent change of heart, his own son, young Tantalus, convinces him that Atreus means well. Atreus (pretending to be happy, but in fact in a triumphantly vengeful mood) greets Thyestes and proceeds to offer him half of his kingdom. Thyestes is pleasantly surprised and pledges his sons as goodwill. The Chorus sings of the strength of family ties, and comments on the drastic change from war preparations to peace. 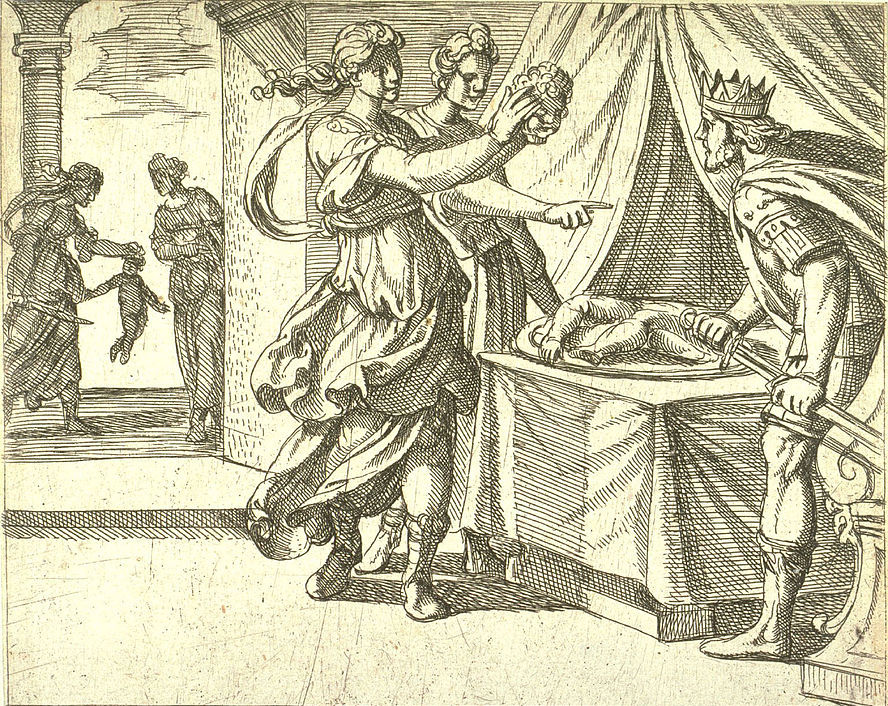 The whole of Act 4 is taken up with the reports from a messenger of the events that have taken place inside the palace: Atreus has sacrificed Thyestes’ children at the altar, dismembered them and cooked them up into a soup, which was then served to Thyestes while he was drunk. The Chorus tells of an unnatural darkness which has fallen over the city because of Atreus‘ crime, as the gods turned back the sun in horror.

Atreus exults over his revenge. Thyestes is revealed inside the palace, still drunk and singing happily about his good fortune, still blissfully ignorant of what has really occurred. However, Atreus then offers Thyestes a cup of wine mixed with blood and shows him the heads of the children on a platter. Thyestes is horrified and begs for the bodies to bury, but Atreus finally reveals to Thyestes that he himself has eaten his own sons’ bodies. Thyestes is appalled and predicts complete vengeance for Atreus‘ crimes, although his prayers to the gods for retribution appear to meet with no response.

“Thyestes” is remarkable for its integration of many facets into a unified whole – dramaturgy, rhetoric, themes, imagery and moral and political issues – and it is often regarded as Seneca’s masterpiece.

The play’s central theme is that of tantalizing, insatiable desire. Tantalus himself, the embodiment of such desire, and whose punishment in the underworld for his own sins was to eternally reach for unreachable food and drink, is brought in by the Furies to infect the House of Atreus with just such insatiable desire. Although Atreus already has all but supreme power, therefore, he still wants more. Furthermore, he wants revenge on his brother, which he sees almost as his right and duty, and such a revenge as to make all previous revenges pale into insignificance. His tendency towards megalomania would not have been lost on audiences living through the excesses of the Roman Empire. 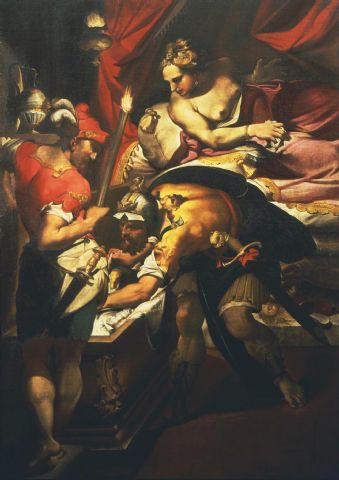 Set against all this excess, the Chorus quietly proposes an alternative, generally in line with Seneca’s Stoic beliefs, based on the calm teaching that self-governance is the only true kingship. Also in contrast to the single-minded Atreus, Thyestes is obviously torn between desire on the one hand and knowledge on the other. Thus, although he clearly still hungers for wealth, acclaim and the throne, he knows from personal experience how delusive and dangerous they can be, and how much peace can lie in a simple life lived according to nature.

However, the character of Thyestes is too weak-willed, too gross in his feasting and too dim-witted in comparison with his brother to command much sympathy, and it is debatable whether the overall effect is that of tragedy in the ancient Greek sense. In some ways, Atreus’ character, with his exuberant ruthlessness, his macabre wit and his command of words and rhetoric, is paradoxically a more attractive one, although he soon becomes repellent through his demented sacrifice of the young children and his sadistic toying with Thyestes. The play’s final effect is essentially horror and shock that Atreus appears to have triumphed with no prospect of punishment or retribution in sight.

Another central theme of the play (and of many of Seneca’s plays) is that of history repeating itself ad nauseam. The killing and eating of the children was part of a tradition of myths long before Seneca, parallelled by stories such as those of Saturn, Procne and of Tantalus himself.

The strife between Atreus and Thyestes was one of the most popular themes of ancient tragedy, covered by at least eight Greek dramas and six Roman dramas other than Seneca’s (notably that of Lucius Accius from about two hundred years earlier), although all of these are now lost. Unlike Seneca’s other tragedies, then, there is no extant Greek tragedy on the same theme as “Thyestes” for direct comparison, and the play is, in that respect at least, an “original”.

However, many of the same issues that have led critics to dismiss Seneca‘s dramas over the years are still apparent in this late work. It is very static, despite the violent actions at its centre, partly due to the lack of stage directions, but partly due to the lengthy speeches, many of which read as though they were exercises in rhetoric. Dialogue is virtually non-existent, as the play consists almost entirely of these long oratorical speeches, and most acts only have two speakers. Often the speeches could easily be transferred from one character to another without really affecting the play at all, and so the characterization appears weak.