“Heroides” (“The Heroines”), also known as “Epistulae Heroidum” (“Letters of Heroines”) or simply “Epistulae”, is a collection of fifteen epistolary poems (poems in the form of letters) by the Roman lyric poet Ovid, published between 5 BCE and 8 CE. The poems (or letters) are presented as though written by a selection of aggrieved heroines of Greek and Roman mythology to their heroic lovers who have in some way mistreated, neglected or abandoned them. In addition, there are three pairs of double letters (Nos. XVI – XXI) where the heroic lovers address their loves and receive their replies. 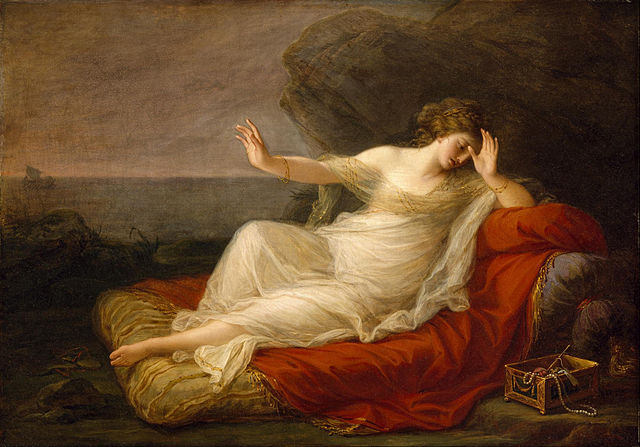 Letter I: Penelope to Ulysses: Penelope, wife of Ulysses (the Greek hero of the Trojan War, known as Odysseus in Greek), ignorant of the cause of her husband’s absence after the fall of Troy and solicitous for his return, chides him for his long stay, and urges him to come home to his wife and family, as he now has no reasonable excuse for his absence.
Letter II: Phyllis to Demophoon: Phyllis, the daughter of Lycurgus of Thrace, complains to Demophoon, the son of King Theseus of Athens (whom she had met after his return from the Trojan War) of his breach of faith in not returning to marry her as he had promised, threatening to bring a violent death on herself if he continues to neglect her.
Letter III: Briseis to Achilles: Briseis (who had been carried off by the Greek hero Achilles during the Trojan War, but then stolen away by the jealous Agamemnon) blames Achilles for his over-violent reaction and entreats him to accept Agamemnon’s peace offers and to take up arms against the Trojans again.
Letter IV: Phaedra to Hippolytus: Theseus’ wife Phaedra confesses her love to Hippolytus (Theseus’ son by the Amazon Hyppolita) in Theseus’ absence, and tries to inspire him with a mutual tenderness, despite their near relationship.
Letter V: Oenone to Paris: The nymph Oenone writes to Paris (son of Priam and Hecuba and a prince of Troy, although brought up secretly by shepherds), complaining that he has unfairly abandoned her, and warning him against the wiles of the beautiful but fickle Helen.
Letter VI: Hypsipyle to Jason: Hypsipyle, queen of the isle of Lemnos, complains that Jason had abandoned her, pregnant, during his quest for the Golden Fleece, and warns him against his new mistress, the enchantress Medea.
Letter VII: Dido to Aeneas: Queen Dido of Carthage, who has been seized with a violent passion for Aeneas (the Greek hero of the Trojan War), tries to divert him from his intention to leave Carthage in order to pursue his destiny in Italy, and threatens to put an end to her own life if he should refuse her.
Letter VIII: Hermione to Orestes: Hermione, promised by her father Menelaus to Achilles’ son Pyrrhus, admonishes her true love Orestes, to whom she was previously betrothed, advising him that she might easily be recovered from the hands of Pyrrhus.
Letter IX: Deianeira to Hercules: Deianeira upbraids her unfaithful husband Hercules for his unmanly weakness in pursuing Iole, and tries to awaken in him a sense of his past glory, but, belatedly hearing of the fatal effects of the poisoned shirt she had sent him in her anger, she exclaims against her own rashness and threatens to end her own life.
Letter X: Ariadne to Theseus: Ariadne, who had fled with Theseus after the slaying of the Minotaur, accuses him of perfidy and inhumanity after he left her on the isle of Naxos in preference for her sister, Phaedra, and tries to move him to compassion by a mournful representation of her misery.
Letter XI: Canace to Macareus: Canace, daughter of Aeolus (the god of the winds) pathetically represents her case to her lover and brother Macareus, whose son she had borne, inveighing against her father’s cruel command that she take her own life as punishment for her immorality.
Letter XII: Medea to Jason: The enchantress Medea, who aided Jason in his quest for the Golden Fleece and fled with him, charges him with ingratitude and perfidy after he transfers his love to Creusa of Corinth, and threatens a speedy revenge unless he restores her to her former place in his affections.
Letter XIII: Laodamia to Protesilaus: Laodamia, wife of the Greek general Protesilaus, endeavours to dissuade him from engaging in the Trojan War and particularly warns him against being the first Greek to set foot on Trojan ground lest he suffer the prophecies of an oracle.
Letter XIV: Hypermestra to Lynceus: Hypermnestra, one of the fifty daughters of Danaus (and the only one who had spared her husband Lynceus from Danaus’ treachery), advises her husband to flee back to his father, Aegyptus, and begs him to come to her assistance before Danaus has her killed for her disobedience.
Letter XV: Sappho to Phaon: The Greek poet Sappho, resolved to throw herself off a cliff when her lover Phaon abandons her, expresses her distress and misery and tries to soothe him to softness and a mutual feeling. 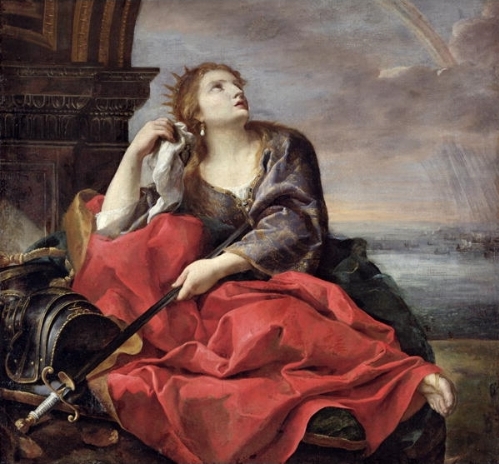 Letter XVI: Paris to Helen: The Trojan prince Paris, deeply enamoured of the beautiful Helen of Sparta, informs her of his passion and insinuates himself into her good graces, eventually resorting to promises that he will make her his wife if she will flee with him to Troy.
Letter XVII: Helen to Paris: In response, Helen at first rejects Paris’ proposals with a counterfeit modesty, before gradually opening herself more plainly and ultimately showing herself quite willing to comply with his scheme.
Letter XVIII: Leander to Hero: Leander, who lives across the Hellespont Sea from his illicit lover Hero and regularly swims across to meet her, complains that a storm is preventing him from joining her, but vows to brave even the bad storm rather than be deprived of her company for much longer.
Letter XIX: Hero to Leander: In response, Hero reiterates the constancy of her love for Leander, but counsels him not to venture out until the sea is calm.
Letter XX: Acontius to Cydippe: Cydippe, a lady of high rank and beauty from the isle of Delos, has solemnly sworn to marry the young, poor Acontius, but has been promised in the meantime by her father to someone else, only avoiding that marriage thus far due to a fever. Acontius writes to Cydippe, claiming that the fever was sent by Diana as a punishment of the breach of the vow Cydippe had made to him in Diana’s temple.
Letter XXI: Cydippe to Acontius: In response, Cydippe claims that Acontius had ensnared her by artifice, although she gradually softens to a compliance and ends with a wish that their marriage may be consummated without delay. 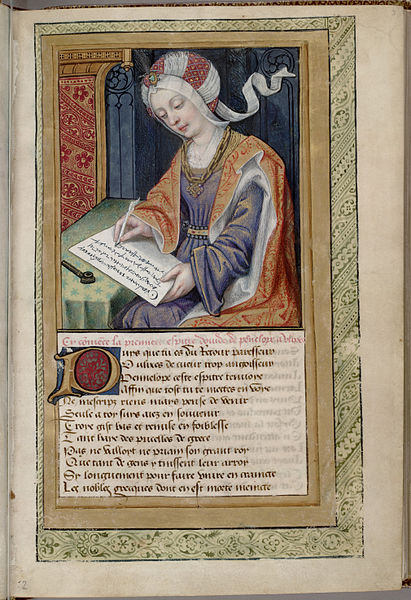 Dating of the poems is difficult, but the composition of the single “Heroides” probably represent some of Ovid‘s earliest poetic efforts, possibly between about 25 and 16 BCE. The double poems were probably composed later, and the collection as a whole was not published until until somewhere between 5 BCE and 8 CE.

Ovid claimed to have created an entirely new literary genre of fictional epistolary poems. Whether this is true or not, the “Heroides” certainly owe much of their heritage to the founders of Latin love elegy – Gallus, Propertius and Tibullus – as evidenced by their metre and their subject matter. They may not have the great emotional range or the often sharp political irony of Ovid‘s “Metamorphoses”, but they do have keen portraiture and a matchless rhetorical virtuosity.

Written thoughout in elegant elegiac couplets, “The Heroides” were some of Ovid‘s most popular works among his assumed primary audience of Roman women, as well as being highly influential with many later poets. They are among the few classical depictions of heterosexual love from the female perspective and, although their apparent uniformity of plot has been interpreted as encouraging a tragic female stereotype, each letter gives a unique and unprecedented perspective into its respective story at a crucial point in time.