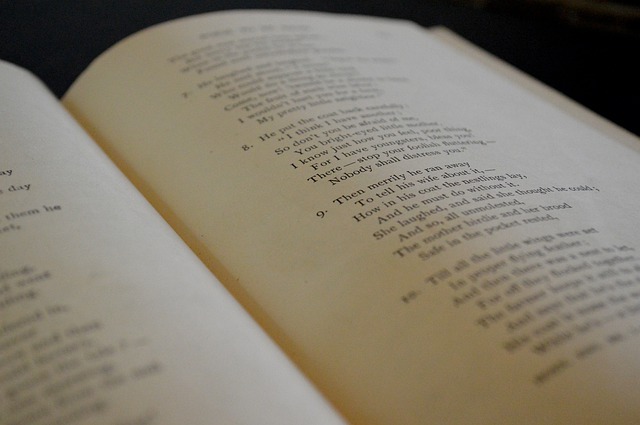 Homeric epithets appear throughout the epic works and help ground the listeners in the writer’s expressions of the people and places described. Epithets are more than just flowery descriptive language.

They contribute to the poem’s form, upholding the poems’ base foundation, and are written in dactylic hexameter. This style is also known as heroic hexameter or the epic’s meter.

Traditionally, it is associated with both Greek and Latin poetry. Dactylic hexameter follows a specific pattern of syllables and beats, lending a lyrical quality to the writing and aiding both in the speaker’s memory of the oral presentation and the audience engagement.

What Is a Homeric Epithet? It Is Homer’s Way With Words

What is a Homeric Epithet? Dactylic hexameter demands a specific rhythm of the words being presented. The epithets are mnemonic aids to the speaker of the traditionally orally presented poems and the audience.

The epithets provide a collection of metrically suitable phrases to balance names and places in the epic, both to create imagery in the mind of the hearer and to bring the words into line with the demands of the poem’s patterns.

Epithets aren’t just adjectives connected with specific nouns. They are descriptors with particular parameters, and they specify the existential nature of the noun to which they are applied. For example, Achilles is referred to as being “swift footed.” This descriptor applies whether he is running or standing still because he is swift of foot at all times, not only when demonstrating the skill.

What Are the Epithets in The Odyssey 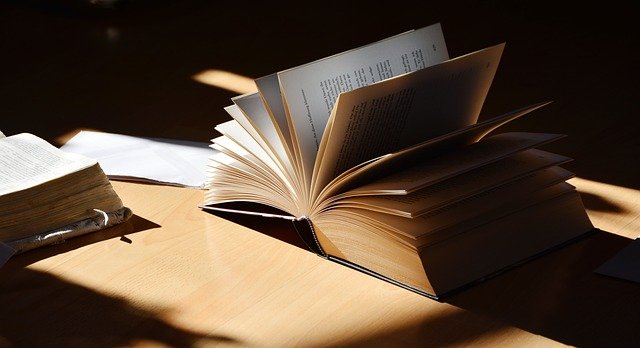 The epithets in The Odyssey apply primarily to Odysseus himself. He is variously described as a “man of many ways” and a “man of many devices. The word in Greek translates to “polytropos,” which means many-wayed.

Some scholars translate this as “shifty.” Others consider Odysseus adaptable, changing his character to suit his situation and circumstances. The skill is vital to both his survival and his ability as a diplomat. He can endear himself to others because he can adjust and adapt to various situations and their needs and perceptions.

He is also called a “many-pained old man,” a man of “many sorrows,” and “much prayed for.” These descriptions further expound upon his place in the Odyssey as a sympathetic character.

Odysseus is presented as both adaptable and clever and a man of great suffering who uses his skill to improve his circumstances and gain an advantage. His epithets provide the reader insight into his character and build sympathy with the hearer of his tale.

The discerning reader will note that Odysseus himself calls himself a “man of many sorrows.” They will need to decide whether he is truly a sympathetic character, humble in his trials and travails, or merely using his misfortunes to gain sympathy and advantage with those he meets.

The Epithets of Odysseus: How Did Homer Use Them to Enhance His Tale?

As Greek Epithets go, Homer tended to apply them most readily to the characters, both gods and men. He often used them to places, objects, or events, as in “the wine-dark sea.”

Those epithets tended to be more influenced by the epic’s stylistic and mnemonic requirements and were less frequently repeated throughout the epics than those applied to specific characters. Homer used six basic epithets: Origin, Patronymic, Appearance, Skill, Position, or Heroic Quality.

Origin refers to the geographical location of the character’s home or place of birth. By citing the origin of a character, Homer placed them more firmly in the audience’s minds as being of a specific nation or race—for example, the “spearmen who lived in the fertile soil of Larisa.”

Patronymic epithets connected characters with their parentage—Circe, daughter of the Sun and Ocean. The appearance was more than flattery—it was used to fix the character in the audience’s mind as having specific characteristics—Calypso was the “nymph with the lovely braids.” Calypso’s maidenly descriptor makes it easier to understand how Odysseus fell for her charms and remained on her island for so long.

Other epithet examples in The Odyssey include descriptors of skill and specific characters’ character, particularly those of non-human origin.

An example would be the Sirens, known as the “singers of death.” The Sirens’ ability is a contrasting description between the attraction of their singing and the fate of anyone who gave in to its lure. The Laestrygonians’ horrors were laid bare early on in the encounter, as they were referred to as the “race of giants,” distinguishing them from ordinary men. The cyclops were referred to as “one eyed monster,” making it clear that any who fell into their hands were doomed.

By contrast, epithets of mortals tended to be more grounded in appearance, skill, or other qualities, as Helen, “that shining woman,” praise the beauty that sets her apart from ordinary mortal women.

Tiresias is no ordinary prophet. He is a “famous seer,” increasing the significance of his predictions and advice. Each epithet is chosen not only for the rhythm and flow of the meter but for the meaning and depth they lend to the narrative and characters. 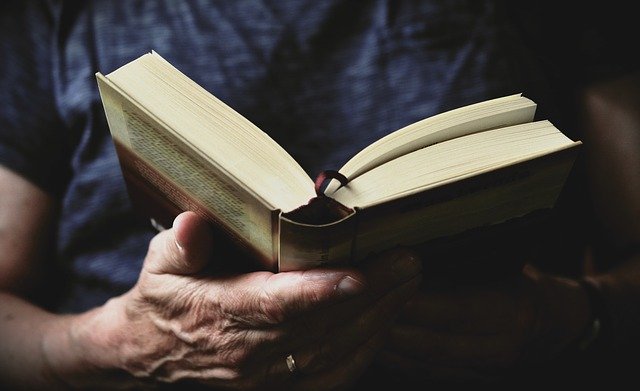 Epithets in The Iliad are far more diverse and complex. The primary difference between the two epics is the way epithets are used. Not only are individual characters given descriptors, the Greeks are also given excess adjectives as a race.

Also, The Iliad has numerous characters, and many of them receive special designations fitting their rank and place in the story. Even geographical locations are provided with descriptors, both to mark them as a specific, familiar place in the audience’s mind or to give a descriptor of the location to enhance further the audience’s understanding of its importance and features.

Iliad perhaps covers less ground geographically speaking than Odysseus’ travels during the Odyssey, but there is a far larger cast of characters with more complex relationships.

The origins and loyalties, intermingled with relationships, actions and counter-actions, and cultural differences, makes the Iliad a rich tapestry of characterization. Homer’s epithets are the golden thread that runs through the entire work, tying together the diverse elements and helping the listener follow the tale as it unfolds.

Iliad’s diverse character list leaves a great deal of room for confusion, particularly as some characters share names, such as Ajax the Greater and Ajax the Lesser.

Many of the gods and goddesses interfere with Human affairs, and their motivations and areas of influence overlap and merge. Epithets help maintain the characters’ purpose, but they are also descriptors that help reveal reasons. Athena, for example, is the bright-eyed, sparkling-eyed, or clear-eyed daughter of Zeus.

The descriptor tends to lend the thought that Athena is wise and also focused upon her goal. As Odysseus’ champion in both Odyssey and Iliad, she remains dedicated to helping him survive his myriad of misfortunes. Her advice and guidance lend him the wisdom to survive the war and in Odyssey to make the journey back to Ithaca.

A Tale of Two Ajaxes—How an Epithet Revealed Character

Ajax the Greater, also known as Telamonian Ajax, is distinguished from Ajax the Lesser, son of Oileus, by the designation. He is placed higher in the hierarchy than the warrior who shares his name, both by skill and heritage.

He is the cousin of Achilles and Zeus’s grandson. He is considered a great warrior in his own right. The famous Heracles prayed for his parents to bring forth a son. Zeus sent an eagle, “aetos” in Greek, as a sign, and Heracles informed the parents they should name their baby boy “Ajax” after the eagle in gratitude.

He gains honor by being known as the “bulwark of the Achaeans,” a descriptor that paints him as a considerable, foreboding defense, providing strength to the Greek warriors and defending Patroclus’ body after Hector kills him.

Being the son of a nymph and a mortal, Ajax the Lesser not only enjoyed a less prestigious family line but was also of poorer character than Ajax the Greater. He brought down Athena’s wrath upon himself and the Achaeans.

As Troy was taken, Ajax the Lesser rushed into the temple of Athena, where he found the priestess, Cassandra, clinging to the statue of the goddess, claiming sanctuary. Ajax violently tore her from her place and dragged her out to the other captives. According to some writers, he raped her while still inside the temple.

Odysseus, horrified at his treatment of the woman, demanded Ajax’s death, knowing Athena would not forgive his disrespect. Ajax saved himself by clinging to the statue, just as his victim had done, and claiming innocence.

The Greeks, unwilling to risk damaging the statue by killing him, let him live. It was a mistake. Infuriated by the treatment of her priestess, Athena persuaded Zeus to send a storm, sinking their ships. Ajax’s ship was struck directly by lightning, breaking it in half and sinking it in the Whirling Rocks.

He might have survived even this disaster if he had not foolishly boasted that he would survive “despite” the immortals. Offended, Poseidon retracted his protection, allowing him to be swallowed up by the sea.

Without being familiar with the two men’s full character, the audience was informed of the contrast immediately by the use of the epithets. By merely adding the descriptors—”the Greater” and “the Lesser” to the name, Homer not only differentiated them by name, he subtly revealed their tendencies as well.

Using Epithets to Color a World 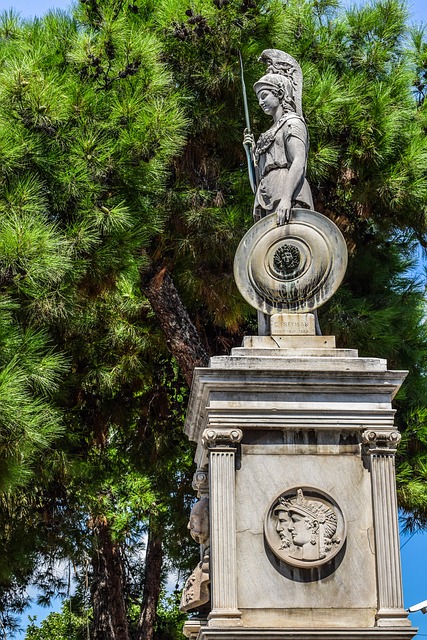 Epithets not only added descriptors and depth to the narrative while solving some metrical challenges, but they were also used to build imagery and setting in the hearer’s minds.

The listener was better able to picture a “rosy-fingered dawn” coloring the sky as morning brought new hope to the despairing warriors. The “wine-dark sea” was foreboding and full of the familiar perils of travel in an unforgiving ocean.

Lands were described as fertile, bringing forth images of fields of rich, dark earth that yielded hearty Greek crops, a land Heroes would surely call home.

A long-shadowed spear brought to mind a symbol of strength and masculinity, vigor on the battlefield and a long reach of a deadly weapon.

Ships were variously described as black- indicating swift deadly silent travel in the darkened sea, a boat that was also a weapon, cutting through the water with great speed, balanced, demonstrating strength and purpose, or benched.

A benched ship is a wounded man, not lacking in strength but garnering sympathy for the damage it has suffered in battle and increasing a sense of urgency for the warriors who rely on them.

Homer used epithets like a sculpture with a chisel, revealing the figure buried in the marble block. The words chipped away into the audience’s perception, building the Iliad and the Odyssey’s world in their minds and creating settings and characters that live on even today.