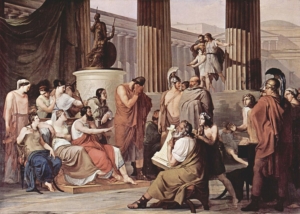 Halitherses in the Odyssey is an Ithacan prophet who foresees the homecoming of his dear friend Odysseus. He, together with Athena, fights for Odysseus’ place in Ithaca through warnings and subtle nudges.

His actions are interpreted in various ways that support the play by giving means of presages and symbols that create a harmonious yet thrilling setting to the epic. To completely understand this, let’s go over Homer’s play.

The Odyssey follows the journey of Odysseus after the trojan war, where he struggles for years until he finally makes it home in one piece. The events of his journey home are as follows:

From the start of the play to the very end of the epic we see the impact Halitherses and his vision created. He, together with Athena, plays a major role in cultivating the creative impact of foretellings, and warnings of the classic.

Mentor in his old age was incredibly close to Odysseus and his father. When the young Odysseus first set sail to join the war in Trojan, Mentor encouraged his son, Halithersis, to watch over the king’s son, Telemachus. Halithersis heeded his father’s command and ended up forming a close relationship with Telemachus, guiding the young boy as he grew up.

After the war ended, the people of Ithaca waited for their king’s return but to their dismay, he did not. Believing he was dead, various suitors tried to woo Penelope. Halithersis, who had become a prophet, foresees the king’s return, thus playing an important role in the epic.

So Who Is Halitherses in the Odyssey?

Halitherses is Odysseus’ dear friend and prophet. He envisions birds flying towards Ithaca and concludes Odysseus’ journey home. He informs the son, Telemachus, of his vision, which Telamechus already knows due to Athena, and warns Penelope’s suitors of their fate.

He also envisioned two birds tearing each other to pieces on the way to Ithaca, symbolizing the massacre that was to come.

The Role of Halitherses in the Odyssey 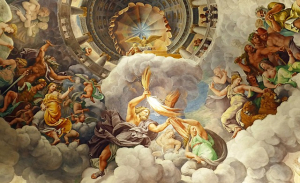 Halitherses, in his role as a seeker, paved the way and connected the narrative from the beginning of the play up to the very end. His prophecies foreshadowed the events that would lead up to Odysseus’ journey, allowing the audience to anticipate the build-up to such affairs.

The present visions of Halitherses support the narrative in preparation for future events and will enable the audience to share such knowledge; giving a wider expanse for creativity and thought.

His forewarnings emphasize the supreme intellect of the gods and the ignorance of humans. This is shown multiple times throughout the play, from the gods’ infinite warnings to the humans’ paying no heed to it. His vision further depicts the difference in knowledge between humans and gods.

Prophecies in the Odyssey

The prophecies sent by the gods to the mortals affect every aspect of the Greek classic. Seen as omens, visions, and even dreams, the prophecies set about tragic events, which may or may not be followed. A prime example of this is Halitherses’ warning to the suitors; he envisions the return of Odysseus and the massacre that is to follow.

The suitors choose not to pay heed to the omen and, in the end, were eventually slaughtered, exhibiting mortal naivety. Another warning was given by Halitherses’, this time to the families of Penelope’s suitors. The families planned to take revenge and shed blood over the deaths of their beloved, they ignored Halitherses’ warning and proceeded to march to Ithaca.

Athena, the goddess of war and reasoning, acts by inferring reason with the families. She commands respect in the chaos and makes the Ithacans forget about their fallen loved ones, bringing peace to Ithaca.

As we’ve discussed The Odyssey, Halitherses, his role in the play, and Odysseus’ ten-year journey home, let’s go over the main points of this article:

And there we have it! An article about The Odyssey, Halitherses, plays Homer’s classic and Odysseus’ journey home.