“Philoctetes” (Gr: “Philoktetes”) is a tragedy by the ancient Greek playwright Sophocles, first performed at the City Dionysia of Athens in 409 BCE, where it won first prize. The story takes place towards the end of the Trojan War, after the events recounted in Homer’s “Iliad”, and describes the attempt by Neoptolemus and Odysseus to persuade or trick the disabled Philoctetes into accompanying them to Troy, in order to fulfill a prophecy and finally bring the ten-year war to a close. 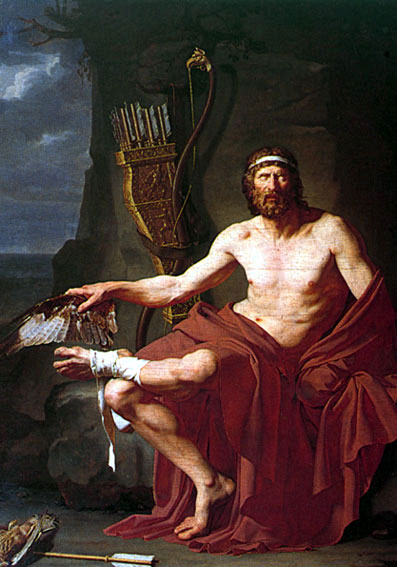 The assumed background to the story goes back to when Heracles was near death (as recounted in another play by Sophocles, “The Trachiniae”), and he wished to be burned alive in order to cut short his agony. However, no-one but the young Philoctetes was willing to light the fire, and in return for this favour Heracles gave Philoctetes his magical bow whose arrows infallibly kill.

Later, when Philoctetes (by then a great warrior and archer) left with the other Greeks to participate in the Trojan War, he was bitten on the foot by a snake (possibly as a result of a curse for revealing the location of Heracles’ body). The bite festered, leaving him in constant agony and giving off a sickening smell. The stench and Philoctetes‘ constant cries of pain drove the Greeks (mainly at Odysseus’ instigation) to abandon him on the desert island of Lemnos, while they continued on to Troy.

After ten years of war, the Greeks seemed unable to finish off Troy. But, on capturing King Priam’s son, Helenus (the twin brother of the prophetess Cassandra, and himself a seer and prophet), they found out that they will never win the war without Philoctetes and the bow of Heracles. So, Odysseus (against his will), accompanied by Neoptolemus, the young son of Achilles, is forced to sail back to Lemnos to retrieve the bow and to face the bitter and twisted Philoctetes. 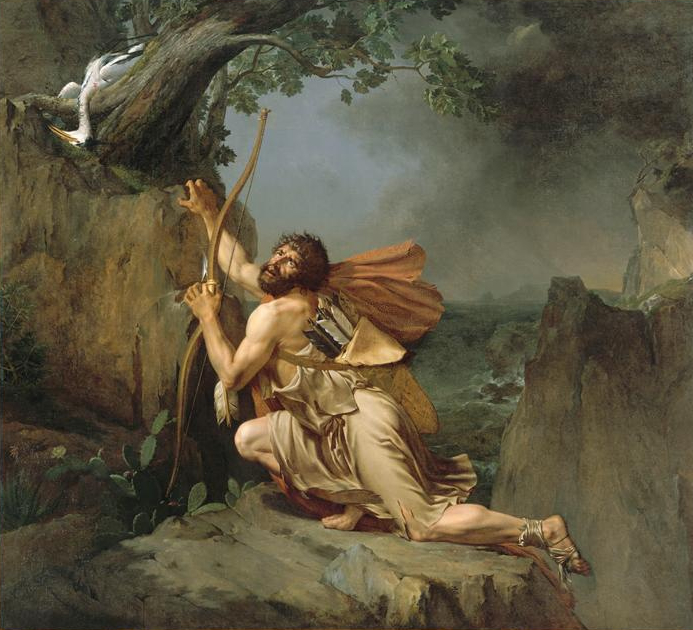 As the play begins, Odysseus explains to Neoptolemus that they must perform a shameful action in order to garner future glory, namely to trick Philoctetes with a false story while the hated Odysseus hides. Against his better judgement, the honourable Neoptolemus goes along with the plan.

Philoctetes is full of joy at seeing fellow Greeks again after all his years of isolation and exile and, as Neoptolemus proceeds to trick Philoctetes into thinking he hates Odysseus as well, a friendship and trust is soon built up between the two men.

Philoctetes then suffers a series of unbearable fits of pain in his foot and asks Neoptolemus to hold his bow, before falling into a deep sleep. Neoptolemus is torn between taking the bow (as the Chorus of sailors advises) and returning it to the pitiful Philoctetes. Neoptolemus‘ conscience eventually gains the upper hand and, also conscious that the bow is useless without Philoctetes himself, he returns the bow and reveals to Philoctetes their true mission. Odysseus now also reveals himself and tries to persuade Philoctetes but, after a raging argument ensues, Odysseus is finally forced to flee before the incensed Philoctetes kills him.

Neoptolemus tries, unsuccessfully, to talk Philoctetes into coming to Troy of his own free will, arguing that they must trust in the gods, who have fated (according to Helenus’ prophecy) that he and Philoctetes will become friends in arms and be instrumental in the taking of Troy. But Philoctetes is unconvinced, and Neoptolemus eventually gives in and agrees to take him back to his home in Greece, thus risking the wrath of the Greek army.

As they are leaving, however, Heracles (who has a special connection to Philoctetes, and who is now a god) appears and commands Philoctetes that he should go to Troy. Heracles confirms Helenus’ prophecy and promises that Philoctetes will be cured and will earn much honour and fame in battle (although it is not actually covered in the play, Philoctetes is in fact one of those chosen to hide inside the Trojan Horse and distinguished himself during the sack of the city, including the killing of Paris himself). Heracles concludes by warning everyone to respect the gods or face the consequences. 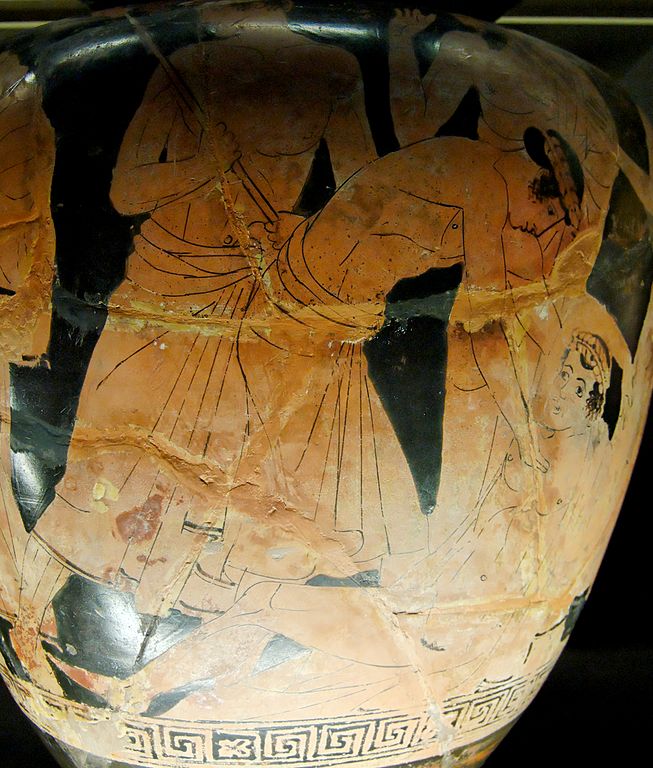 The legend of Philoctetes’ wounding and his enforced exile on the island of Lemnos, and his eventual recall by the Greeks, was mentioned briefly in Homer‘s “Iliad”. The recall was also described in more detail in the lost epic, “The Little Iliad” (in that version he was brought back by Odysseus and Diomedes, not Neoptolemus). Despite its somewhat peripheral position at the edges of the main Trojan War story, it was clearly a popular tale, and both Aeschylus and Euripides had already written plays on the subject before Sophocles (although neither of their plays have survived).

In Sophocles’ hands, it is not a play of action and doing but of emotions and feeling, a study in suffering. Philoctetes’ sense of abandonment and his search for meaning in his suffering still speaks to us today, and the play poses tough questions regarding the doctor/patient relationship, questions about the subjectivity of pain and the difficulty of pain management, the long-term challenges of caring for the chronically ill and the ethical boundaries of medical practice. Interestingly, the two plays of Sophocles’ old age, “Philoctetes” and “Oedipus at Colonus”, both treat the aged, decrepit heroes with great respect and almost awe, suggesting that the playwright understood suffering, both from medical and psycho-social perspectives.

Also central to the play is the opposition between the honest and honourable man of action (Neoptolemus) and the cynical and unscrupulous man of words (Odysseus), and the whole nature of persuasion and deception. Sophocles appears to suggest that deception is unjustifiable in democratic discourse no matter how high the stakes may be, and that common ground outside of politics must be found if conflicts are to be resolved.

The supernatural appearance of Heracles towards the end of the play, in order to achieve a resolution of the seemingly intractible problem, is very much in the ancient Greek tradition of the “deus ex machina”.