“Oedipus at Colonus” (Gr: “Oidipous epi Kolono” or “Oedipus epi Kotonoi”; Lat: “Oedipus Coloneus”) is a tragedy by the ancient Greek playwright Sophocles. It is Sophocles’ last surviving play, written shortly before his death in 406 BCE, and the last written of his three Theban plays (the other two being “Oedipus the King” and “Antigone”: in the timeline of the Theban plays, however, the events of “Oedipus at Colonus” occur after “Oedipus the King” and before “Antigone”). It describes the end of the blinded Oedipus‘ tragic life at the town of Colonus near Athens. 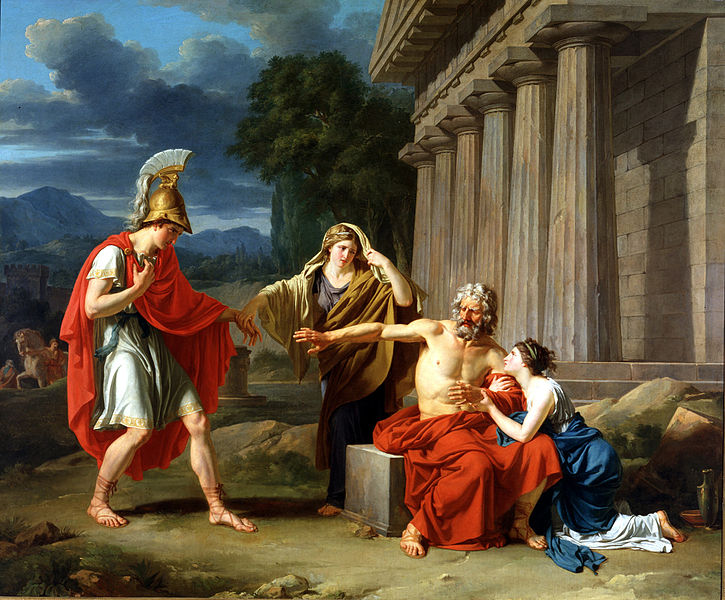 The blind Oedipus, exiled from his native Thebes and reduced to a life of wandering led by his daughter Antigone, arrives at the town of Colonus, where he is at first told to move on because the ground there is sacred to the Erinyes or Furies (also known as the Eumenides). Oedipus takes this as auspicious, because Apollo’s original prophecy, in addition to predicting that he would kill his father and marry his mother, also revealed that he would die at a place sacred to the Furies and that he would be a blessing for the land in which he is buried.

The Chorus of old men of Colonus are horrified to learn that he is the son of Laius, of whom they have heard, and desperately try to expel him from their town, fearing that he will curse it. Oedipus argues that he killed his father in self-defence and is not morally responsible for his crimes. Furthermore, he even claims to be there on a sacred mission, bearing a great gift for the people and asks to see Theseus, king of Athens. 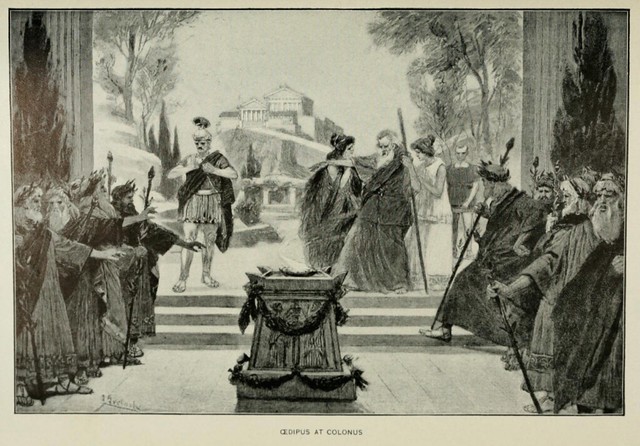 Oedipus’ other daughter Ismene arrives, bringing the news that his younger son Eteocles has seized the throne of Thebes and his elder son Polynices is raising a force (the “Seven Against Thebes” of Aeschylus’ play) to attack the city and reclaim control. According to an oracle, though, the outcome of this conflict depends on where Oedipus himself is buried, and it is further rumoured that his scheming brother-in-law Creon is planning to have him killed and buried at the border of Thebes without proper burial rites, so that neither son can claim the power of the oracle’s prediction. Oedipus pledges allegiance to neither of his feuding sons, contrasting them with his devoted daughters, and throws himself on the mercy and protection of the people of Colonus, who have treated him well thus far.

The Chorus questions Oedipus for details of his incest and patricide but, when King Theseus arrives, the king already appears well informed on all the tragic events, and sympathizes with Oedipus, offering him unconditional aid. Touched by Theseus’ understanding and concern, Oedipus offers him in return the gift of his burial site, which will ensure victory for Athens in any future conflict with Thebes. Theseus protests that the two cities are on friendly terms, although Oedipus warns him that only the gods are unaffected by the passage of time. Theseus makes Oedipus a citizen of Athens, and leaves the Chorus to guard him when he leaves.

Creon, representing Thebes, arrives and feigns pity for Oedipus and his children, suggesting that he should return to his home city of Thebes. Oedipus, though, knowing the cruel Creon well, is not taken in by his wiles. Creon then seizes Antigone and reveals that he has already captured Ismene, threatening to use force to bring Oedipus back to Thebes, regardless of the attempts of the men of the Chorus to stop him. King Theseus and his men intervene to protect Oedipus, and they overpower Creon and the Thebans and rescue Oedipus’ daughters, stressing the Athenian respect for the law compared to the lawlessness of degenerate Thebes. 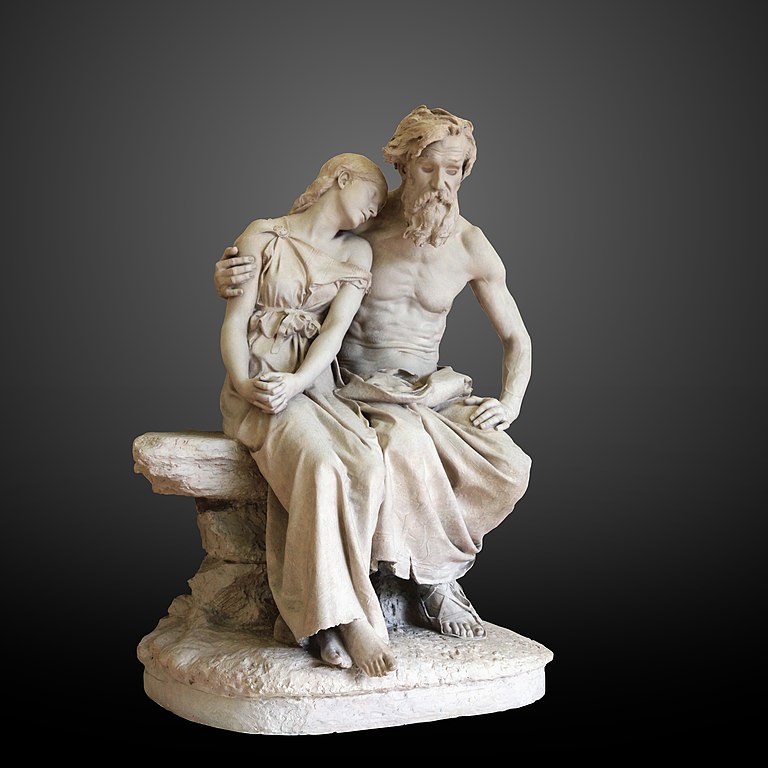 Oedipus‘ son Polynices, banished from Thebes by his brother Eteocles, arrives and begs to speak to Oedipus. Antigone persuades her father, against his better judgement, to hear her brother speak, and Polynices begs for reconcilation with his father, craving his forgiveness and blessing (knowing that the oracle has declared that victory will fall to whichever side Oedipus espouses). Oedipus is unmoved and curses both his worthless sons, bluntly foretelling that they will kill each other in the coming battle.

A fierce thunderstorm rolls in, which Oedipus interprets as a sign from Zeus that his end is near. He insists on granting Theseus and his city of Athens the gift he promised, declaring that Athens will forever be protected by the gods as long as Theseus does not reveal the location of his grave to anyone. Suddenly filled with an inner strength as his fate nears, the blind Oedipus stands and walks, calling for his children and Theseus to follow him into the sacred grove of the Furies.

A messenger arrives and describes to the Chorus the dignified death of Oedipus, explaining how, at the last minute, he had sent his children away so that only Theseus might know the exact place of his death, and pass it on to his heir. Even though Ismene and Antigone are distraught at their father’s death, King Theseus scrupulously refuses to reveal to them the site of Oedipus’ burial. Eventually, the women submit and start back for Thebes, still hoping to stop Polynices and the Seven Against Thebes from marching on the city and the bloodshed which will inevitably result.

At the time that “Oedipus at Colonus” was written, Athens was undergoing many changes, in the wake of the military defeat by the Spartans and the brutal and dictatorial rule of the Thirty Tyrants, and both the writing of the play and its reception by the Athenian audiences of the time would have been influenced by this historical context. The Athens of the play is seen as the apogee of democracy and jurisprudence as Theseus, King of Athens, unconditionally allows Oedipus sanctuary. The Athenian suburb of Colonus, which is the main setting for the play, is where Sophocles spent a good part of his own boyhood years.

There is much less action and more philosophical discussion in this play than in “Oedipus the King” and Sophocles’ other plays. Written, according to some reports, when Sophocles was approaching his ninetieth year, he treats the aged protagonist with great respect throughout the play. The cheerful hope with which the care-worn Oedipus looks forward to his death – as a release from the troubles and sufferings of life – almost certainly has some personal application and reflects to some extent the feelings of the aged poet. 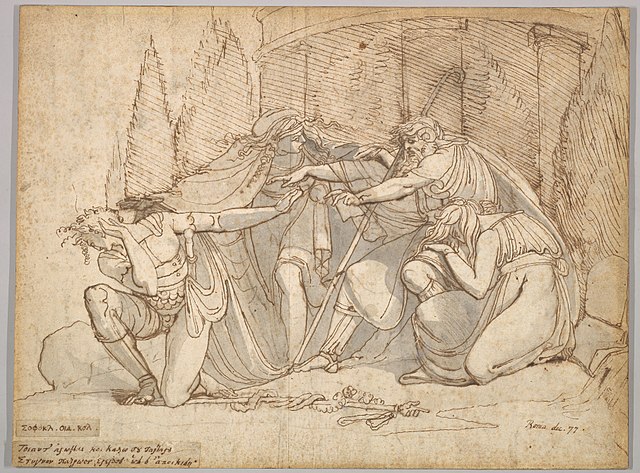 The play follows Oedipus’ transition from beggar to a kind of hero, and it can be seen as a kind of meditation on the fallibility of humans and the possibility of their redemption. Life is presented as a journey or learning process and, throughout the play, Oedipus moves from a peaceful resignation and defeatism at the beginning, through a fiery passion reminiscent of his younger days in the central portion, to a serenity and inner peace (and even a new-found assertiveness and dignity) at the end.

The play explicitly addresses the theme of a person’s moral responsibility for their destiny, and whether or not it is possible to rebel against fate (Oedipus repeatedly claims that he is not responsible for the actions he is fated to commit). Sophocles suggests that, although a ruler’s limited understanding may lead him to believe himself fully innocent, this does not change the objective fact of his guilt.

However, there is also the suggestion that, because Oedipus sinned unknowingly, his guilt may in some way be reduced, allowing his earthly sufferings to serve as sufficient expiation for his sins, so that in death he may be favoured (as Apollo’s prophecy has predicted). Despite being blinded and exiled and facing violence from Creon and his sons, in the end Oedipus is accepted and absolved by Zeus and comes to accept the inevitability of divine will and prophesy.

Perhaps the most famous quote from the play comes in line 880: “In a just cause, the weak overcome the strong”.