“Dyskolos”, usually translated as “The Grouch” but also “The Misanthrope” or “The Curmudgeon” or “The Bad-Tempered Man”, is a comedy by the ancient Greek playwright Menander. It was first presented at the Lenaia dramatic festival in about 316 BCE, where it won first prize. It is the only one of Menander‘s plays (or indeed of the whole New Comedy tradition), that has survived in relatively complete form, although some maintain that in fact it still contains a number of lacunae or gaps. It is the story of the grumpy, cantankerous old man, Knemon, and his attempts to prevent the wealthy young Athenian, Sostrates, from marrying his daughter, Myrrhine. 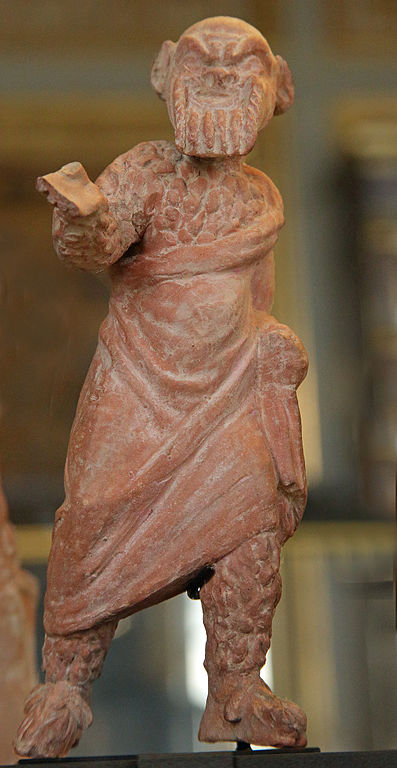 In the prologue to the play, Pan, the god of the woods, is seen leaving the Cave of the Nymphs (at Phyle in Attica), and he explains to the audience that the farm on his right belongs to Knemon, a morose and unsociable man who lives with his daughter, Myrrhine, and one old maidservant, Simiche.

The farm on his left is worked by Gorgias, Knemon’s stepson, aided by his aged slave, Daos, and this is where Knemon’s wife has fled to escape her husband’s bad temper. Meanwhile, Sostrates, the son of a wealthy Athenian who had come hunting in the area, has seen Myrrhine and fallen in love with her, thanks to the machinations of the mischievous Pan.

In the first scene, Sostrates’ slave runs in and reports that the curmudgeonly farmer had cursed, stoned and beaten him off the land before he could say a word about his master’s intentions. Knemon himself then appears, grumbling that there are too many people in the world, and he becomes even angrier when he sees Sostratos standing by his front door and rudely dismisses the young man’s appeal for a talk. As Knemon goes into his house, Myrrhine comes out to fetch water, and Sostratos insists on helping her. The encounter is witnessed by Gorgias’ slave, Daos, who reports it to his own master.

Initially, Gorgias fears that the stranger’s intentions are dishonourable, but he is considerably softened when Sostratos vows in the name of Pan and the Nymphs that he wishes to marry Myrrhine. Although Gorgias doubts that Knemon will regard Sostratos’ suit with favour, he promises to discuss the matter with the grouch in the fields that day and invites Sostratos to accompany him. 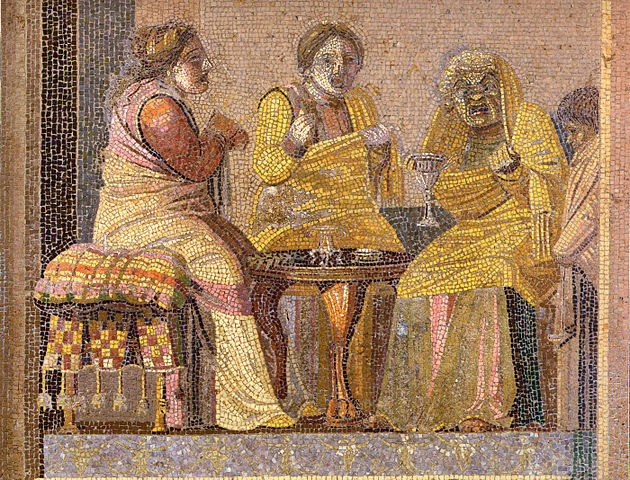 Daos points out to Sostratos that Knemon will be hostile if he sees Sostratos idling in his elegant cloak, but that he may be more favourably disposed toward the latter if he believes him to be a poor farmer like himself. Willing to do almost anything to win Myrrhine, Sostratos dons a rough sheepskin coat and agrees to dig along with them in the fields. Daos explains privately to Gorgias his plan that they should work much harder than usual that day and so exhaust Sostratos that he will cease to pester them.

At the end of the day, Sostratos is aching all over after his unaccustomed physical labour. He has failed to see Knemon but is still friendly toward Gorgias, whom he invites to a sacrificial banquet. Knemon’s old maidservant, Simiche, now runs in, having dropped her bucket into the well and having lost both the bucket and the mattock she used to retrieve it. The uncompromising Knemon pushes her furiously offstage. However, the cry suddenly goes up that Knemon himself has now fallen into the well, and Gorgias and Sostratos rush to the rescue, despite the young man’s preoccupation with admiring the beautiful Myrrhine.

Eventually, Knemon is brought in, bedraggled and self-pitying, but much sobered by his narrow escape from death. Although he has long been convinced that no man is capable of a disinterested act, he is nevertheless impressed by the fact that Gorgias, whom he has often abused, came to his rescue. In gratitude, he adopts Gorgias as his son and grants him all his property. He also asks him to find a husband for Myrrhine, and Gorgias promptly betroths Myrrhine to Sostratos, to which Knemon gives his indifferent approval.

Sostratos returns the favour by offering one of his own sisters to Gorgias as his wife. Unwilling to marry a rich woman because of his poverty, Gorgias at first refuses, but is persuaded by Sostratos’ father, Kallippides, who has arrived to join the feast and who urges him to use some common sense.

Everyone joins in the ensuing festivities, except of course Knemon, who has taken to his bed and is relishing his loneliness. The various slaves and servants whom he has insulted take their revenge by beating at his door and shouting demands to borrow all sorts of unlikely objects. Two servants crown the old man with a garland and pull him, complaining as always, into the dance. 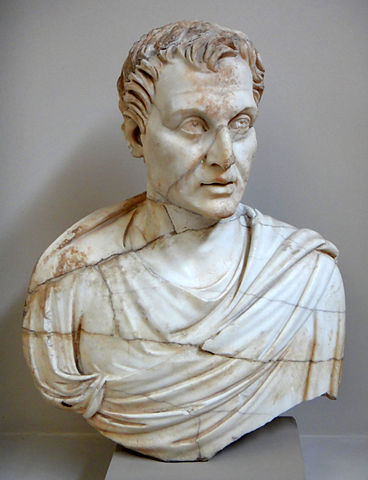 By the time of Menander, the Old Comedy of Aristophanes had given way to New Comedy. After Athens had lost its political independence and much of its political importance with its defeat by Philip II of Macedon in 338 BCE and then the death of Alexander the Great in 323 BCE, freedom of speech (of which Aristophanes had availed himself so liberally) effectively no longer existed. The large state-sponsored dramatic festivals were a thing of the past, and the majority of the spectators at theatrical productions were now of the leisured and educated classes.

In New Comedy, the prologue (spoken by a character in the play or, often, by a divine figure) became a more prominent feature. It informed the spectators of the situation at the time when the action began, and often promised a happy ending, immediately eliminating some of the suspense of the plot. A comedy usually comprised five acts, divided by interludes which were irrelevant to the action and performed by a Chorus which took no part in the play proper. All dialogue was spoken, not sung, and mostly delivered in ordinary everyday speech. There were few references to individual Athenians or to known events, and the play treated universal (not local) themes, with generally realistic plots.

The stock characters of New Comedy, using fictitious characters to represent certain social types (such as the harsh father, the benevolent old man, the prodigal son, the rustic youth, the heiress, the bully, the parasite and the courtesan), would have used regular masks with strongly characteristic features, rather than masks of individualized characters.

Also, the characters of New Comedy were usually dressed like the average Athenian of the day, and the exaggerated phallus and padding of Old Comedy were no longer used. Particular colours were typically considered appropriate to particular character types, such as white for old men, slaves, young women and priestesses; purple for young men; green or light blue for old women; black or grey by parasites; etc. Cast-lists in New Comedy were often quite long, and each actor might be called upon to play many short parts in one play, with only the briefest intervals for costume changes. 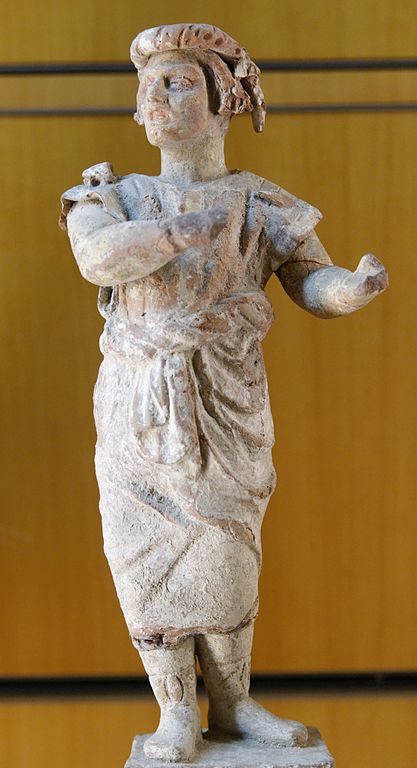 The character of Knemon – the misanthropic, surly, lonely crank who makes life a burden both for himself and others – is therefore representative of a whole class, in line with the use of fictitious characters and stock social types in New Comedy. Menander does not see Knemon as a mere product of circumstance (his stepson, Gorgias, grew up in the same poverty but developed into a completely different man), but indicates that it was the man’s predisposition which made him as he was. Even though Knemon becomes aware by the end of the play that people need one another, he still does alter his nature and remains anti-social and unpleasant even after his accident and rescue.

Menander is remarkable for presenting a great range of individualized and sympathetically treated slaves. He thought of them neither as mere instruments of their masters’ wishes, nor merely as vehicles for comic interludes. He clearly did not regard slaves as a different kind of creature from the free, and considered all men as human beings worthy of the artist’s attention. The slaves in the play act with their own motivations, within a framework provided by the actions, characters and intentions of their owners. Although they do not direct what happens, they certainly affect it.