The “Theogony” (Gr: “Theogonia”) of the ancient Greek poet Hesiod is a didactic or instructional poem describing the origins of the cosmos and the complicated and interconnected genealogies of the gods of the ancient Greeks, as well as some of the stories around them.

It was composed around 700 BCE, making it (along with “The Iliad” and “The Odyssey” of Homer) one of the earliest extant works on Greek mythology.

(N.B. There are various alternative spellings for many of the names mentioned here. For instance, “c” and “k” are generally interchangeable, as are “us” and os”, e.g Cronus/Kronos, Crius/Kreios, Cetus/Ceto/Keto, etc, and some are better known in their Latinized form).

In the very beginning, Chaos, the nothingness out of which the first objects of existence appeared, arose spontaneously. The parthenogenic children of Chaos were Gaia (the Earth), Eros (Desire or sexual love), Tartarus (the Underworld), Erebus (Darkness) and Nyx (Night).

Erebos and Nyx reproduced to make Aither (Brightness) and Hemera (Day), and from Gaia came Ouranos (Sky), the Ourea (Mountains) and Pontus (Sea). Ouranos mated with Gaia to create three sets of offspring: the twelve Titans (Oceanos, Coeus, Crius, Hyperion, Iapetos, Theia, Rhea, Themis, Mnemosyne, Phoebe, Tethys and Kronos), a race of powerful deities that ruled during the legendary Golden Age; the three Kyklopes or Cyclops (Brontes, Steropes and Arges), a race of one-eyed giants; and the three Hecatonchires (Kottos, Briareos and Gyges), hundred-handed giants of even greater power and ferocity than the Titans. 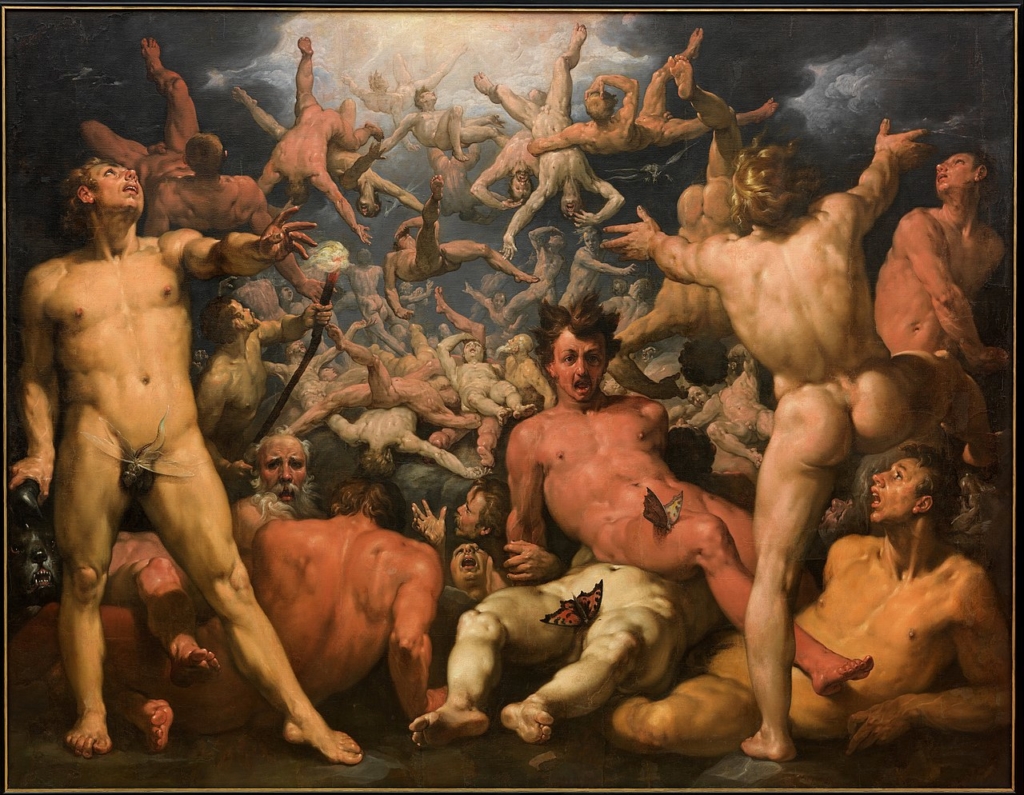 Ouranos was so disgusted with the Hecatonchires that he pushed them back into Gaia’s womb, so Gaia begged the Titans to punish their father. Only Kronos, the youngest and most ambitious Titan, was willing to do so, and he castrated his father with Gaia’s sickle. Ouranos’ blood splattered onto the earth, producing the Erinyes (the vengeful Furies), the Gigantes (Giants) and the Meliai (a race of tree nymphs). Kronos threw Ouranos’ severed testicles into the sea, and Aphrodite (the goddess of Love) formed out of the sea-foam which resulted.

After Ouranos’s castration, Gaia married Pontus and they went on to produce a line of sea deities, nymphs and monsters, including Nereus (the Old Man of the Sea, also known as Proteus and Phorcys in his other aspects, from whom were descended the Nereids, the fifty nymphs of the sea, the best-known being Thetis), Thaumas (who later married the Oceanid Electra, and bore Iris, or Rainbow, and the two winged spirits, Aello and Ocypetes, known as the Harpies), Eurybia and Cetus (a hideous sea monster).

Cetus and her sibling Phorcys had many children of their own, including the Graiae (the three grey witches with one eye and one tooth shared among them), the three Gorgons (the best known being the snake-haired Medusa, who would later give birth to the winged-horse Pegasus), Echidna (a serpent-bodied monster who in turn produce many other well-known monsters such as the Nemean Lion, the Chimera, the Hydra, the Sphinx and Cerberus) and Ophion.

The Titans married between themselves and had Titan offspring of ther own: Oceanus and Tethys bore the three-thousand Oceanid nymphs (including Electra, Calypso and Styx) as well as all the rivers, fountains and lakes of the world; Theia and Hyperion had Helios (Sun), Selene (Moon) and Eos (Dawn); Crius and Eurybia bore Astraios (father, with Eos, of the wind gods, Zephyros, Boreas, Notos and Eurus, as well as all the stars), Pallas (father, with the Oceanid Styx, of Zelos or Zeal, Nike or Victory, Cratos or Strength and Bia or Force), and Perses; Coeus and Phoebe married to produce Leto and Asteria (mother, with her cousin Perses of Hecate, the goddess of wilderness, childbirth, witchcraft and magic); Iapetos married the Oceanid nymph Clymene and had Atlas, Menoetius, Prometheus and Epimetheus.

Kronos, who had established himself as leader of the Titans, married his sister Rhea but, mindful of the prophecy that one of his children would overthrow him, he made sure to swallow each of the children she birthed: Hestia (goddess of the hearth and domesticity), Demeter (goddess of the earth and fertility), Hera (goddess of women and marriage), Hades (god of the Underworld), Poseidon (god of the sea) and Zeus (god of the sky and thunder, and later to become the king of the gods) in that order. However, with the help of Gaia and Ouranos, Rhea managed to trick Kronos into saving Zeus from this fate, and then to further trick him into vomiting up his other five children.

Joining with Zeus, the other offspring of Rhea and Kronos (collectively known as the Olympian gods, for their chosen home on Mount Olympus), along with the Kyklopes, Prometheus and Epimetheus, then waged a great ten-year war on the Titans and the Giants for control of the cosmos. Eventually Zeus released the Hecatonchires from their imprisonment in Tartarus to shake the earth, allowing him to gain the upper hand in the struggle and, casting the fury of his thunderbolts at the Titans, throw them down into Tartarus.

In her anger at the defeat of the Titans, Gaia had a final son, fathered by Tartarus, known as Typhoeus or Typhon. Typhoeus was one of the most grotesque and deadly monsters of all time, reaching as high as the stars, his hands reaching east and west with a hundred dragon heads on each, his bottom half composed of gigantic hissing viper coils, and his whole body covered in wings and with fire flashing from his eyes. He too was defeated by Zeus, however, who trapped him underneath Mount Etna.

Because Prometheus had helped Zeus in the battle against the Titans, he was not sent to Tartarus like the others, but his subsequent attempts to trick Zeus and then his theft of forbidden fire from the Olympian gods, led Zeus to punish him by chaining him to a cliff where an eagle would perpetually feed on his liver, which would magically regenerate each day. Also as a result of Prometheus‘ theft of the secret of fire for man, Zeus called on Athena and Hephaistos, the lame blacksmith to the gods, to create a beautiful woman, Pandora, who opened a jar (referred to as “Pandora’s box” in modern accounts) releasing all the evils of mankind, leaving only Hope inside once she had closed it again. Hesiod also suggested at this point that women in general were henceforth to be considered a curse on men.

Zeus, now established as king of the Olympian gods, first married the Oceanid Metis, but, in order to avoid a prophecy that any offspring of his union with Metis would be greater than he, Zeus swallowed Metis herself to prevent her from giving birth. However, Metis was already was pregnant with Athena at that time and she nurtured her inside Zeus, until Athena burst forth from Zeus’ forehead, fully armed.

Zeus’ second wife was the Titan Themis, who bore the three Horae (the Hours, goddesses controlling orderly life), Eunomia (Order), Dike (Justice), Eirene (Peace), Tyche (Prosperity) and the three Moirae (the Fates, white-robed personifications of destiny, namely Klotho the Spinner, Lachesis the Alotter and Atropos the Unturned, an alternative version of their parentage to their creation by Nyx).

Zeus’ fourth wife was his own sister Demeter, who bore Persephone, who was later to marry Hades and bear Melinoe (goddess of ghosts), Zagreus (god of the Orphic mysteries) and Macaria (goddess of the blessed afterlife).

Zeus’ sixth wife was the second generation Titan Leto, who gave birth to Apollo (the god of music, poetry and oracles, who was born on the floating island of Delos after Hera had banned Leto from giving birth on earth) and his twin sister Artemis (goddess of the hunt, childbirth and fertility). 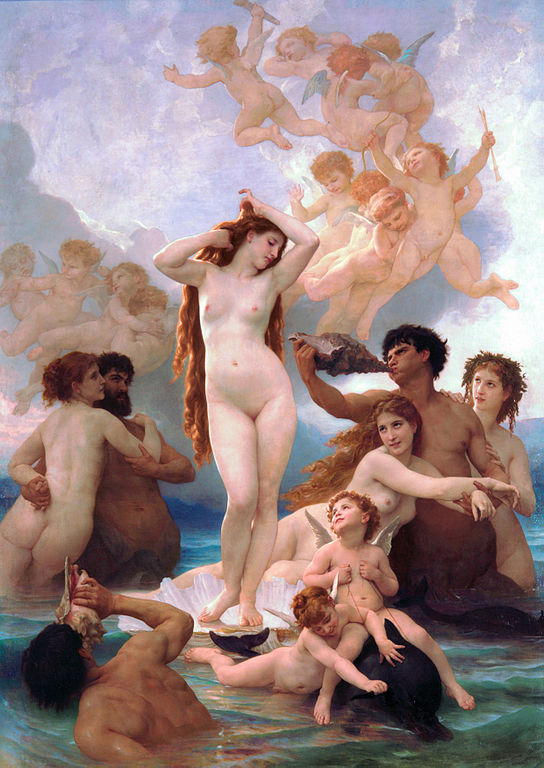 Zeus’ seventh and final wife was his sister Hera, who gave birth to Hebe (cupbearer of the gods), Ares (god of war), Enyo (goddess of war), Hephaistos (the lame blacksmith and craftsman of the gods) and Eileithyia (goddess of childbirth and midwifery).

Zeu’s brother Poseidon married the Nereid Amphitrite and produced Triton, the messenger of the deep. The hero Theseus, who was the son of Aethra, was considered to have been jointly fathered by both Poseidon and by Aethra’s husband Aegeus, as Aethra had lain with both on the night of his conception.

Aphrodite was given in marriage by Zeus to his own son, the lame and ugly Hephaistos, in an attempt to prevent any jealousy and rivalry which might arise over her great beauty. But she nevertheless had an affair with Ares and gave birth to Eros (Love), Phobos (Fear), Deimos (Cowardice) and Harmonia (Harmony). Harmonia would later marry Cadmus, the founder of Thebes, to sire Ino, Semele (the mother of Dionysus by Zeus), Agaue, Polydorus and Autonoe.

The “Theogony” is essentially a large-scale synthesis of a vast variety of local Greek traditions concerning the gods and the universe, organized as a narrative that tells about the creation of the world out of Chaos and about the gods that shaped the cosmos. To some extent, it represents the Greek mythology equivalent of the book of Genesis in the Hebrew and Christian “Bible”, as it lists the early generations and genealogy of the gods, titans and heroes since the beginning of the universe.

Interestingly, Hesiod claims in the work that he (a poet, and not some mighty king) had been given the authority and responsibility of disseminating these stories by the Muses directly, thus putting himself almost in the position of a prophet. 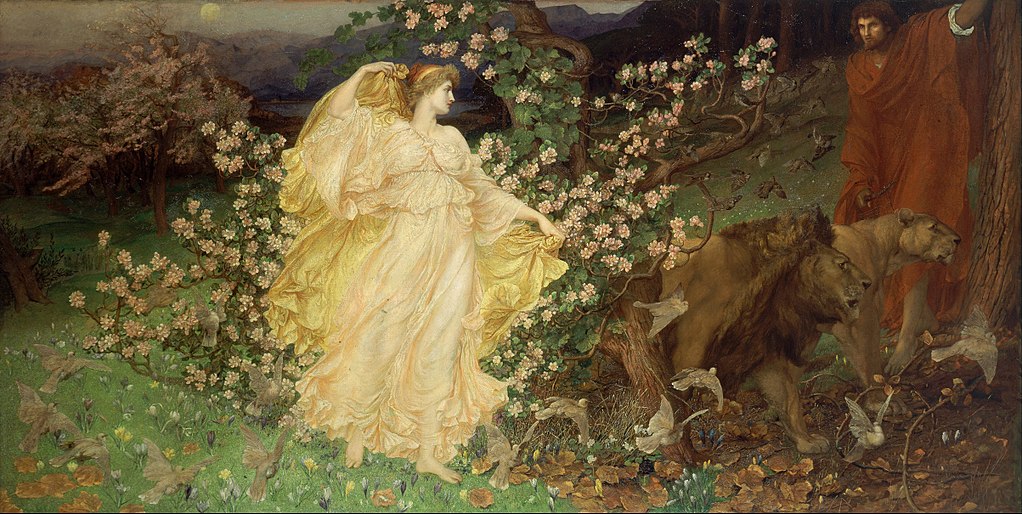 In formal terms, the poem is presented as a hymn in 1,022 lines invoking Zeus and the Muses, in the tradition of the hymnic preludes with which an ancient Greek rhapsode would begin his performance at poetic competitions. The final written form of the “Theogony” was probably not established until the 6th Century BCE, however, and some editors have concluded that a few minor episodes, such as the Typhoeus episode in verses 820-880, is an interpolation (a passage introduced later).

It should perhaps be seen not a definitive source of Greek mythology, but rather as a snapshot of a dynamic tradition of myths as it stood at that particular time. Greek mythology continued to change and adapt after this time, and some of the stories and attributes of the various gods have likewise transformed over time.