“Iphigenia at Aulis“ (Gr: “Iphigeneia en Aulidi“) is the last extant tragedy by the ancient Greek playwright Euripides. It was written sometime between 408 and 406 BCE (the date of his death) and was first produced in the year following his death, where it won first place at the Athenian City Dionysia contest. The play revolves around Agamemnon, the leader of the Greek forces in the Trojan War, and his decision to sacrifice his own daughter, Iphigenia, in order to allow his troops to set sail and preserve their honour by doing battle against Troy.

The Greek fleet, ready to sail for Troy, is becalmed at Aulis. The seer Calchas has advised that the lack of wind is due to the will of the goddess Artemis, whom Agamemnon has slighted, and that in order to placate her, Agamemnon must sacrifice his eldest daughter, Iphigenia (Iphigeneia). He must consider this seriously because his assembled troops may rebel if their honour is not appeased and their bloodlust not satisfied, so he has sent a message to his wife, Clytemnestra, telling her to bring Iphigenia to Aulis, on the pretext that the girl is to be married to the Greek warrior Achilles before he sets off to fight. 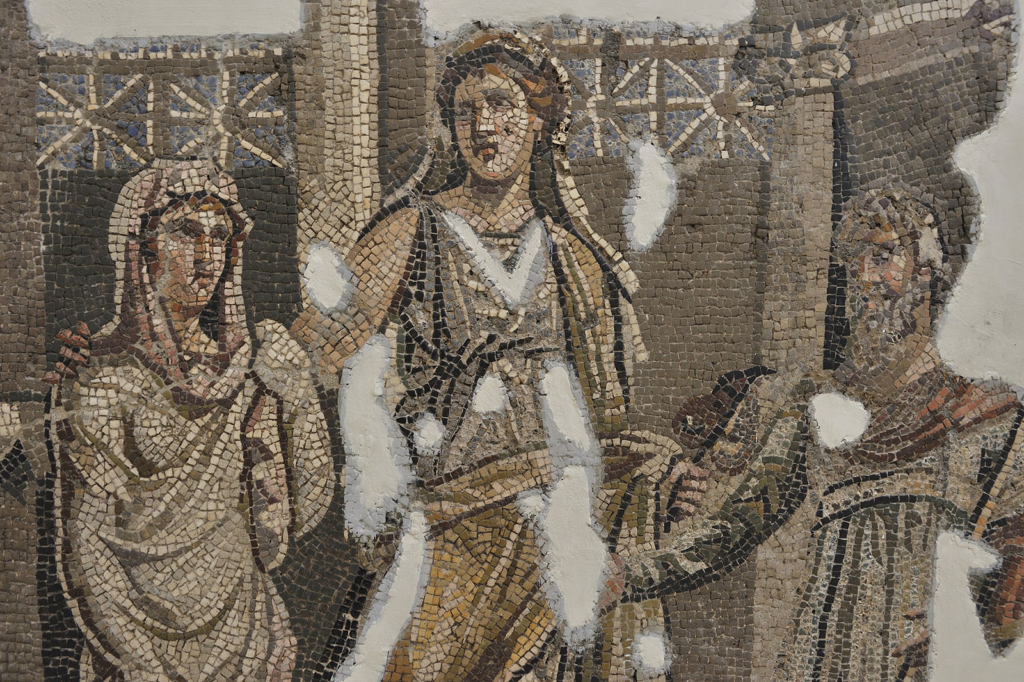 At the start of the play, Agamemnon is having second thoughts about going through with the sacrifice and sends a second message to his wife, telling her to ignore the first. However, Clytemnestra never receives it, because it is intercepted by Agamemnon‘s brother, Menelaus, who is enraged that he should have changed his mind, seeing it as a personal slight (it is the retrieval of Menelaus‘ wife, Helen, that is the main pretext for the war). He also realizes that it may lead to mutiny and the downfall of the Greek leaders if the troops were to discover the prophecy and realize that their general had put his family above their pride as soldiers.

With Clytemnestra already on her way to Aulis with Iphigenia and her baby brother Orestes, the brothers Agamemnon and Menelaus debate the matter. Eventually, it appears that each has managed to change the other’s mind: Agamemnon is now ready to carry out the sacrifice, but Menelaus is apparently convinced that it would be better to disband the Greek army than to have his niece killed. 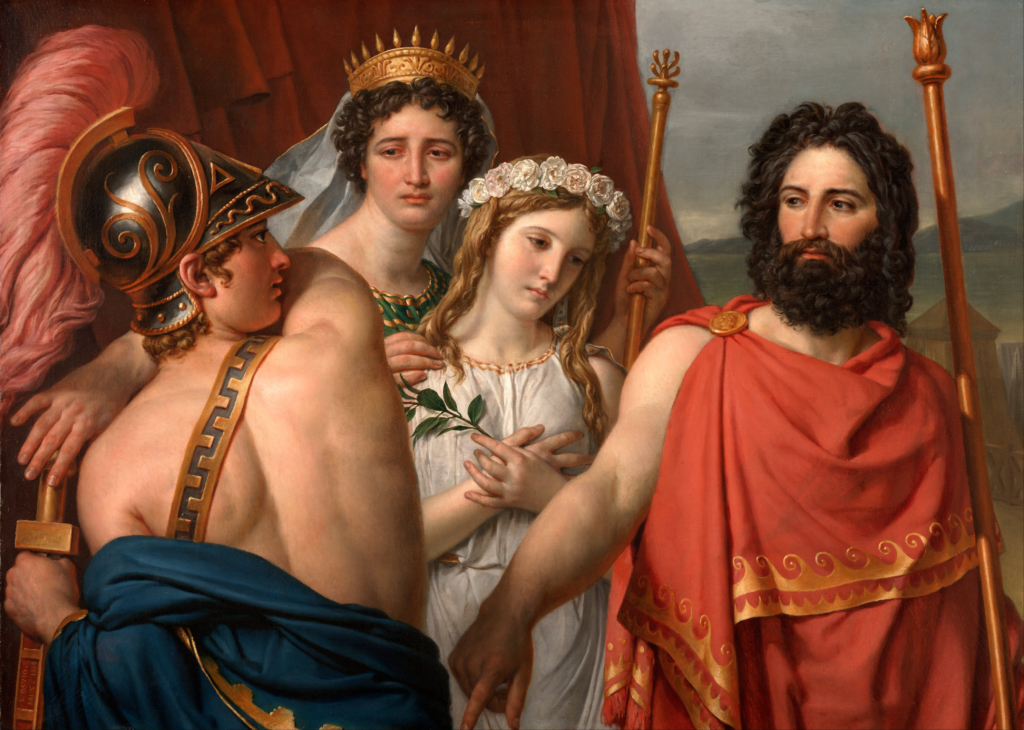 Innocent of the real reason for her summoning, the young Iphigenia is thrilled at the prospect of marrying one of the great heroes of the Greek army. But, when Achilles discovers the truth, he is furious at having been used as a prop in Agamemnon‘s plan, and he vows to defend Iphigenia, although more for the purposes of his own honour than to save the innocent girl.

Clytemnestra and Iphigenia try in vain to persuade Agamemnon to change his mind, but the general believes that he has no choice. As Achilles prepares to defend the young woman by force, though, Iphigenia herself has a sudden change of heart, deciding that the heroic thing to do would be to let herself be sacrificed after all. She is led off to die, leaving her mother Clytemnestra distraught. At the end of the play, a messenger comes to tell Clytemnestra that Iphigenia‘s body inexplicably disappeared just before the fatal blow from the knife.

“Iphigenia at Aulis“ was Euripides‘ last play, written just before his death, but it only premiered posthumously as part of a tetralogy that also included his “Bacchae” at the City Dionysia festival of 405 BCE. The play was directed by Euripides‘ son or nephew, Euripides the Younger, who was also a playwright, and won first prize at the contest (ironically a prize that had eluded Euripides all his life). Some analysts are of the opinion that some of the material in the play is inauthentic and that it may have been worked on by multiple authors.

Compared to Euripides‘ earlier treatment of the Iphigenia legend in the rather lightweight “Iphigenia in Tauris”, this later play is much darker in nature. However, it is one of the few Greek plays which shows Agamemnon in anything other than a negative light. Clytemnestra has many of the best lines in the play, particularly where she doubts that the gods really require this sacrifice. 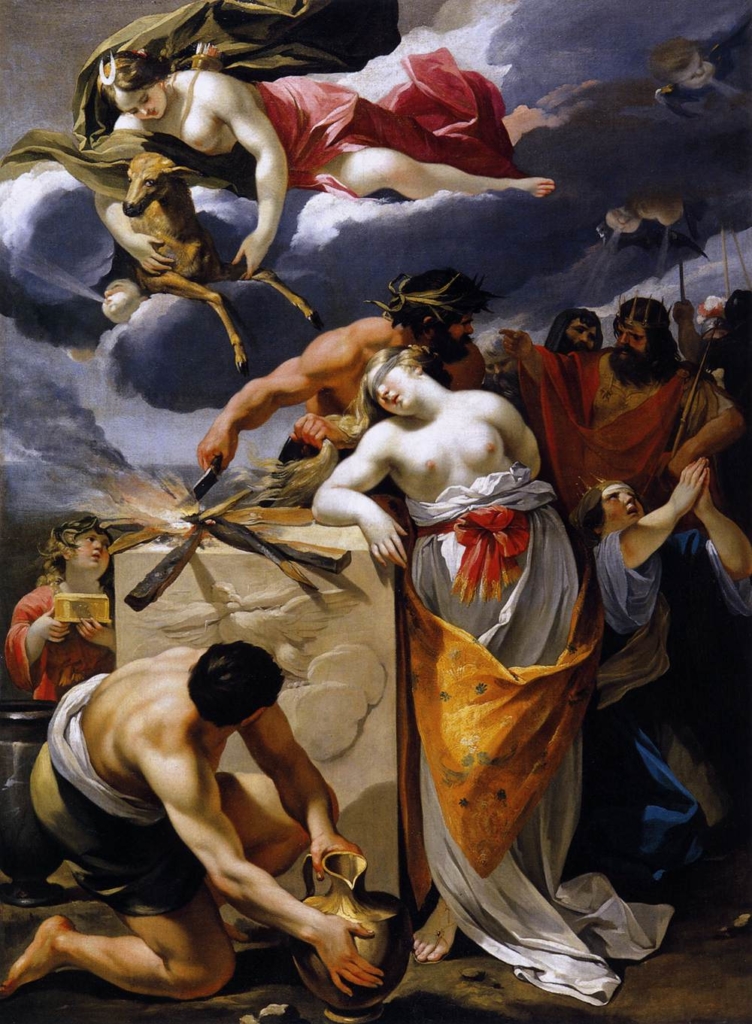 A recurring motif in the play is that of the changing of minds. Menelaus first urges Agamemnon to sacrifice his daughter, but then relents and urges the opposite; Agamemnon is resolved to sacrifice his daughter at the beginning of the play, but he changes his mind twice afterwards; Iphigenia herself appears to transform herself quite suddenly from the pleading girl to the resolute woman bent on death and honour (indeed the suddenness of this transformation has led to much criticism of the play, from Aristotle onwards).

At the time of writing, Euripides had recently moved from Athens to the relative safety of Macedon, and it was becoming increasingly clear that Athens would lose the generation-long conflict with Sparta known as the Peloponnesian War. “Iphigenia at Aulis” may be regarded as a subtle attack on two of the principle institutions of ancient Greece, the army and prophecy, and it seems clear that Euripides had grown progressively more pessimistic of the ability of his countrymen to live justly, humanely and compassionately.

Structurally, the play is unusual in that it begins with a dialogue, which is followed by a speech by Agamemnon that reads more like a prologue. The “agon” of the play (the struggle and argument between the main characters which typically supplies the basis of the action) occurs relatively early, when Agamemnon and Menelaus argue over the sacrifice, and there is in fact a second agon when Agamemnon and Clytemnestra trade arguments later in the play.

In this last of Euripides‘ surviving plays, there is, significantly, no “deus ex machina”, as there is in so many of his plays. Thus, although a messenger tells Clytemnestra at the end of the play that Iphigenia‘s body disappeared just before the fatal blow from the knife, there is no confirmation of this apparent miracle, and neither Clytemnestra nor the audience are sure of the truth of it (the only other witness being Agamemnon himself, an unreliable witness at best).