“Heracles” or “The Madness of Heracles” (Gr: “Herakles Mainomenos”; Lat: “Hercules Furens”) is a tragedy by the ancient Greek playwright Euripides. It describes the frenzy of divinely induced madness of the Greek hero Heracles which led him to kill his own wife and children. It was written around 416 BCE or earlier, the second of two surviving plays by Euripides concerning the family of Heracles (the first being the “Heraclidae”), and was first produced at the Dionysia festival of Athens, although it did not win any prize. 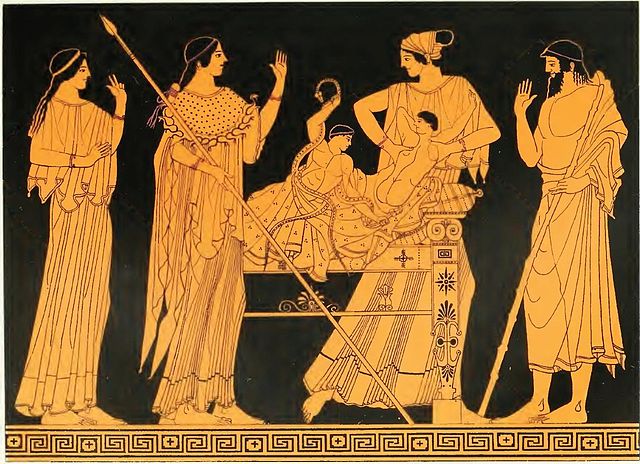 In the prologue, Amphitryon, the mortal father of Heracles, outlines the ancestral history of the families of Heracles and of Lycus, and some of the background to the events of the play. Lycus, the usurping ruler of Thebes, is about to kill Amphitryon, as well as Heracles‘ wife Megara and their three children (because Megara is the daughter of the lawful king of Thebes, Creon). Heracles, however cannot help his family, as he is engaged in the last of his Twelve Labours, bringing back the monster Cerberus who guards the gates of Hades. Heracles‘ family have therefore taken refuge at the altar of Zeus.

The Chorus of old men of Thebes sympathizes with Megara and her children, frustrated that they cannot help them. Lycus asks how long they are going to try and prolong their lives by clinging to the altar, claiming that Heracles has been killed in Hades and will not be able to help them. Lycus justifies his threat to kill the children of Heracles and Megara on the grounds that he cannot risk them attempting to avenge their grandfather when they grow up. Although Amphitryon argues against Lycus point by point, and asks permission for Megara and the children to go into exile, Lycus reaches the end of his patience and orders that temple be burnt down with the suppliants inside.

Megara refuses to die a coward’s death by being burned alive and, having at last abandoned hope for Heracles‘ return, she obtains Lycus’ permission to dress the children in suitable robes of death to face their executioners. The old men of the Chorus, who have stoutly defended Heracles‘ family and praised Heracles‘ famous Labours agains Lycus’ slurs, can only watch as Megara returns with the children, dressed for death. Megara tells of the kingdoms Heracles had planned to give each of the children and of the brides she intended them to marry, while Amphitryon laments the futility of the life he has lived.

At that moment, though, while Lycus exits to await the preparations for the burning, Heracles unexpectedly returns, explaining that he was delayed by the need to rescue Theseus from Hades in addition to bringing back Cerberus. He hears the story of Creon‘s overthrow and Lycus’ plan to kill Megara and the children, and resolves to revenge himself on Lycus. When the impatient Lycus returns, he storms into the palace to get Megara and the children, but is met inside by Heracles and killed. 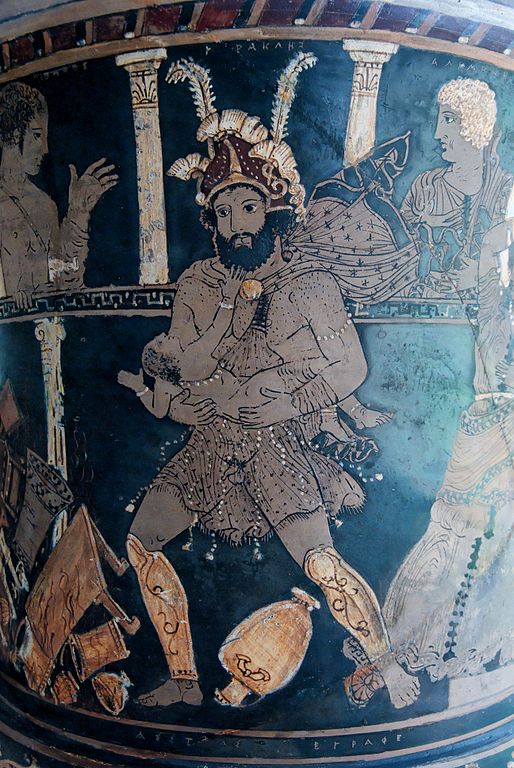 The Chorus sing a joyful song of celebration, but it is interrupted by the unexpected appearance of Iris (the messenger goddess) and Lyssa (the personification of Madness). Iris announces that she has come to make Heracles kill his own children by driving him mad (at the instigation of Hera, Zeus’ jealous wife, who resents that Heracles was Zeus’ son, as well as the god-like strength he has inherited).

A messenger reports how, when the fit of madness fell on Heracles, he believed he had to kill Eurystheus (the king who had assigned his Labours), and how he had moved from room to room, thinking that he was going from country to country, in search of him. In his madness, he was convinced that his own three children were those of Eurystheus and killed them as well as Megara, and would have killed his step-father Amphitryon too had the goddess Athena not intervened and put him into a deep sleep.

The palace doors are opened to reveal the sleeping Heracles chained to a pillar and surrounded by the dead bodies of his wife and children. When he wakes up, Amphitryon tells him what he has done and, in his shame, he rails at the gods and vows to take his own life.

Theseus, king of Athens, recently freed from Hades by Heracles, then enters and explains that he has heard of Lycus’ overthrow of Creon and has come with an Athenian army to help overthrow Lycus. When he hears what Heracles has done, he is deeply shocked but understanding and offers his renewed friendship, despite Heracles‘ protestations that he is unworthy and should be left to his own misery and shame. Theseus argues that the gods regularly commit evil acts, such as forbidden marriages, and are never brought to task, so why therefore should Heracles not do likewise. Heracles denies this line of reasoning, arguing that such stories are merely the inventions of poets, but is eventually convinced that it would be cowardly to commit suicide, and resolves to go to Athens with Theseus. 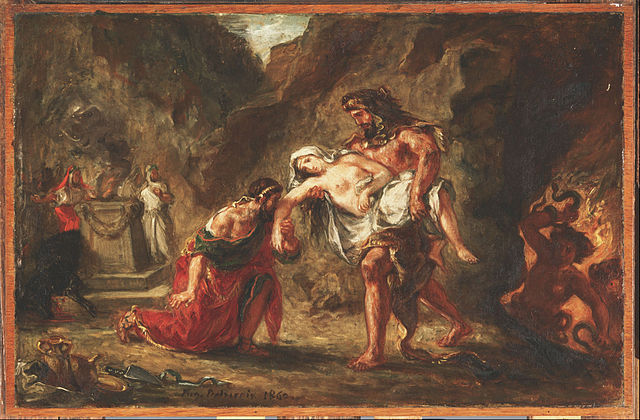 He asks Amphitryon to bury his dead (as the law forbids him to remain in Thebes or even to attend the funeral of his wife and children) and the play end with Heracles leaving for Athens with his friend Theseus, a shamed and broken man.

Like several of Euripides‘ plays, “Heracles” falls into two parts, the first in which Heracles is raised to the height of triumph when he kills Lycus, and the second in which he is driven to the depths of despair by madness. There is no real connection between the two parts and the play is often criticized for lack of unity for this reason (Aristotle argued in his “Poetics” that events in a drama should happen because of one another, with a necessary or at least probable connection, and not just in a meaningless sequence).

Some have argued in the play’s defence, however, that Hera’s hostility to Heracles was well-known and provides sufficient connection and causality, and that Heracles‘ madness follows anyway from his inherently unstable character. Others have argued that the excitement and dramatic impact of the events compensate for the flawed plot-structure. 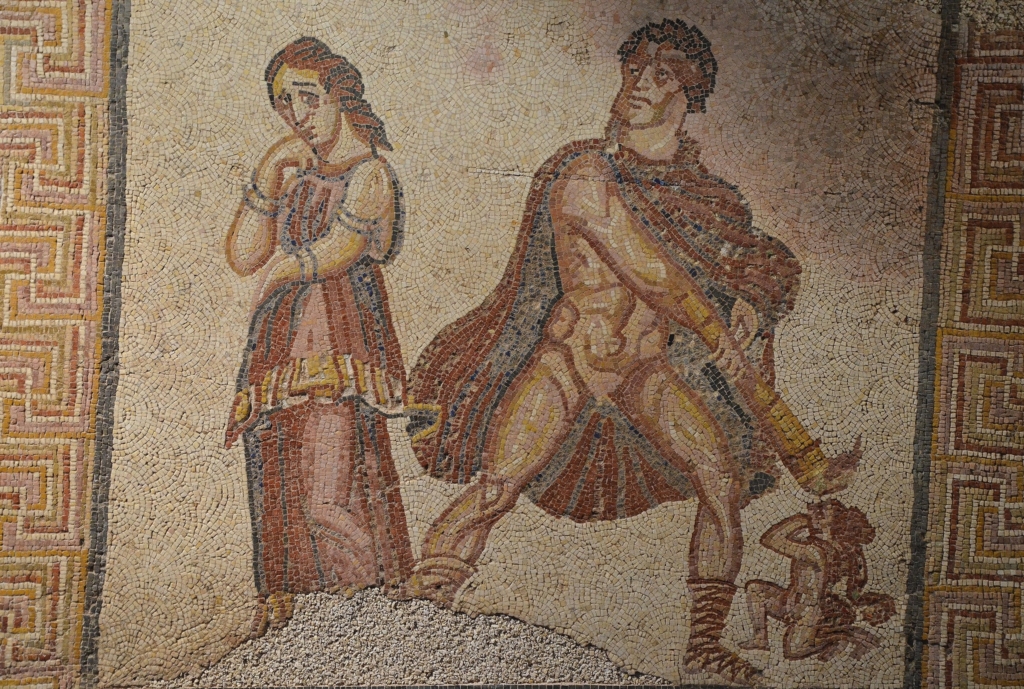 Some commentators claim that Theseus‘ unexpected arrival is even a third unrelated part to the play, although it was prepared for earlier in the play and thereby explained to some extent. Euripides clearly took some care over the plot and was unwilling to use Theseus merely as a “deus ex machina”.

The staging of the play is more ambitious than most at that time, with the requirement for a “mekhane” (a kind of crane contraption) to present Iris and Lyssa above the palace, and an “eccyclema” (a wheeled platform pushed out from the central door of the stage building) to reveal the slaughter within.

The major themes of the play are courage and nobility, as well as the incomprehensibility of the acts of the gods. Both Megara (in the first half of the play) and Heracles (in the second) are innocent victims of powerful, authoritative forces they cannot defeat. The moral theme of the importance and consolation of friendship (as exemplified by Theseus) and Euripides‘ Athenian patriotism are also prominently displayed, as in many of his other plays.

The play is perhaps unusual for its time in that the hero suffers from no observable error (“hamartia”) which causes his doom, an essential element of most Greek tragedies. Heracles‘ fall is due to no fault of his own, but arises out of Hera’s jealousy over Zeus’ affair with Heracles‘ mother. This punishment of a guiltless man would have outraged all sense of justice in ancient Greece. 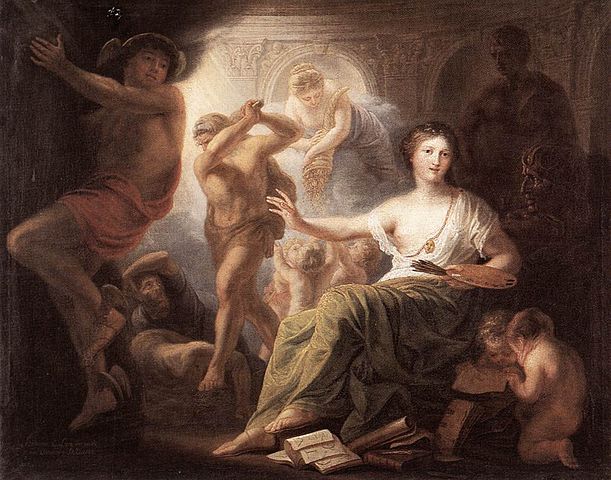 Unlike in the plays of Sophocles (where the gods represent cosmic forces of orderÂ that bind the universe together into a cause-and-effect system, even if its workings are often beyond mortal understanding), Euripides did not have such faith in divine providence, and saw more evidence of the rule of chance and chaos than of order and justice. He clearly intended for his audience to be puzzled and outraged by the irrational and unjust act of Hera against an innocent Heracles, and to question the actions of such divine beings (and thus to question their own religious beliefs). As Heracles questions at one point in the play: “Who could offer prayers to such a goddess?”

The Heracles of Euripides (portrayed asÂ an innocent victim and a loving father) comes across as much more sympathetic and admirable that the inconstant lover of Sophocles‘ drama “The Trachiniae”. In this play, Heracles also learns, with the help of Theseus, to accept his terrible curse and to stand more nobly in the face of heaven’s onslaught, as compared to Sophocles‘ Heracles who cannot bear his burden of pain and seeks escape in death.