“Electra“ (Gr: “Elektra“) is a tragedy by the ancient Greek playwright Euripides. It tells the tale of Electra and her brother, Orestes, as they take their revenge on their mother, Clytemnestra, for her murder of their father, Agamemnon. It was written quite late in Euripides‘ career, some time in the 410s BCE, although the actual date is uncertain. 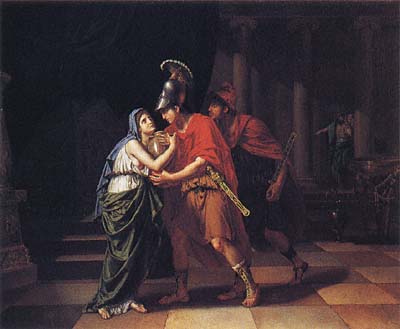 The play begins with a peasant’s brief recap of some of the background story: how the vengeful Clytemnestra killed Agamemnon on his return from the seige of Troy, and now rules over Argos with her lover, Aegisthus; how Electra‘s brother Orestes was sent away by the insecure Clytemnestra and Aegisthus, and put under the care of the king of Phocis, where he became friends with the king’s son, Pylades; and how Electra herself was also cast out of the royal house and married off to a farmer, a kind man who has never taken advantage of her or her family, and who Electra helps with household chores in return. Despite her genuine appreciation for her peasant husband, Electra clearly still strongly resents both being cast out of her house and her mother’s loyalty to the usurping Aegisthus.

Now a grown man, Orestes and his companion Pylades have travelled to Argos in hopes of taking revenge for Agamemnon‘s death. Disguised as messengers from Orestes, they arrive at the house of Electra and her husband, while the latter is out at work on the farm. Not knowing their real identities, Electra tells them her sorrowful story and also of the injustice done to her brother, expressing her fervent wish that Orestes would return to avenge the death of Agamemnon, and to ease her and her brother’s suffering. 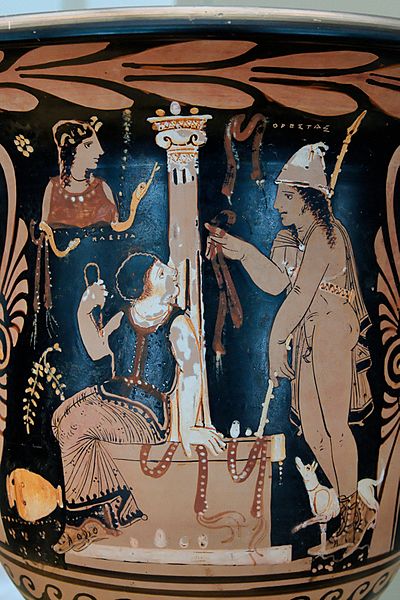 When Electra‘s husband returns, the old servant who had saved Orestes‘ life (by stealing him away from Argos after Agamemnon‘s death may years before) is sent for. The aged servant sees through Orestes‘ disguise, recognizing him by a scar on his forehead incurred as a small child, and the two siblings are reunited. Electra is eager to help her brother in bringing down Clytemnestra and Aegisthus, and they conspire together.

While the old servant lures Clytemnestra to Electra‘s house with the spurious news that her daughter has had a baby, Orestes and Pylades set off to confront Aegisthus. They are invited to participate in a sacrifice to the gods that Aegisthus is hosting, which provides Orestes with the opportunity to stab Aegisthus after the sacrifice. He reveals his true identity to those present, and then returns to Electra‘s cottage with the dead body of Aegisthus.

As Clytemnestra approaches Electra‘s house, Orestes‘ resolve begins to waver at the prospect of killing his mother, but Electra coaxes him into going through with it, reminding him of Apollo’s oracle which has foretold that he would kill his mother. When Clytemnestra finally arrives, Electra taunts her and blames her for her abhorrent actions, while Clytemnestra tries to defend herself and begs to be spared. Despite her pleas, Orestes and Electra kill her (offstage) by pushing a sword down her throat: although the murder is ultimately committed by Orestes, Electra is equally guilty because she urges him on and even holds the sword with him. Afterwards, though, they are both racked by guilt and remorse for the gruesome murder of their own mother.

At the end of the play, Clytemnestra‘s deified brothers, Castor and Polydeuces (also known as the Dioscori), appear and reassure Electra and Orestes that their mother received just punishment, blaming Apollo for encouraging the matricide. Nevertheless, it was a shameful act, and the gods instruct the siblings on what they must do to atone and purge their souls of the crime. It is decreed that Electra must marry Pylades and leave Argos, and Orestes is to be pursued by the Erinyes (the Furies) until he faces a trial at Athens, from which he will emerge as a free man. 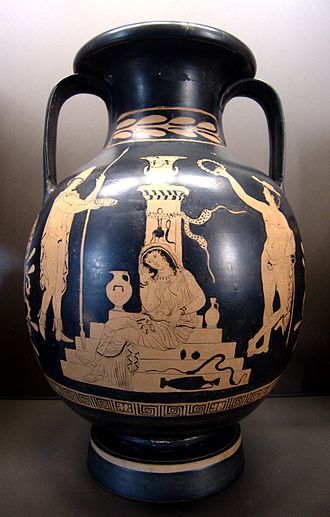 It is unclear whether Euripides‘ “Electra” was first produced before or after Sophocles‘ play of the same name (“Electra”), but it certainly came over 40 years after Aeschylus‘ “The Libation Bearers” (part of his ever popular “Oresteia” trilogy), whose plot is roughly equivalent. By this stage in his career, Euripides had sloughed off most of the influence that Aeschylus had on his early works, and in this play he even ventures a parody of the recognition scene in Aeschylus‘ account: Electra laughs out loud at the idea of using tokens (such as a lock of his hair, a footprint he leaves at Agamemnon‘s grave, and an article of clothing she had made for him years earlier) to recognize her brother, the very device employed by Aeschylus.

In Euripides‘ version, Orestes is instead recognized from a scar he received on the forehead as a child, itself a mock-heroic allusion to a scene from Homer‘s “Odyssey” where Odysseus is recognized by a scar on his thigh that he received as a child. Instead of receiving the scar in a heroic boar hunt, though, Euripides instead invents a semi-comic incident involving a fawn as the reason for Orestes‘ scar.

In some ways, Electra is both the protagonist and the antagonist of the play, which examines the battle between her hateful, vengeful side and that part of her which is still the noble and loyal daughter. Although she has convinced herself that the murder of Clytemnestra and Aegisthus would give justice to her dead father and result in satisfaction and peace for herself, the reality is much less clear-cut and her tragic existence is actually intensified by the guilt and sorrow she suffers from having instigated her brother to matricide.

Euripides attempts to portray the characters in the play (both the gods and the humans) realistically, and not idealized. Electra is unwilling to see even the slightest goodness in her mother, yet her regard for the old peasant she has married appears quite genuine. Euripides ​hints that Clytemnestra‘s murder was actually due to Orestes‘ weakness, faced as he was with the dilemma of whether to follow his own moral instincts or to obey Apollo’s oracle, in much the same way as the sacrifice of Iphigenia had been for his father many years before. Electra and Orestes‘ true underlying affection for their mother, repressed for many years by their obsession for revenge, only surfaces after her death, as they realize that they both hate her and love her at the same time.

The justification and consequences of murder and revenge is the major theme throughout the play, both the murder of their mother by Orestes and Electra, but also the other murders (of Iphigenia, and of Agamemnon and Cassandra) which led up to the current one in a tit-for-tat succession of acts of vengeance.

Towards the end of the play, the theme of repentance also becomes an important one: after the death of Clytemnestra, both Electra and Orestes repent intensely, realizing the horror of what they have done, but aware that they will always be unable to undo or repair it and that they will henceforth always be considered unwelcome outsiders. Their remorse is contrasted with Clytemnestra‘s complete lack of remorse for her own actions.

Minor themes include: celibacy (Electra‘s peasant husband has so much respect for her ancestors that he does not feel worthy of her and never approaches her bed); poverty and riches (Clytemnestra and Aegisthus‘ lavish lifestyle is contrasted with the simple life led by Electra and her husband); and the supernatural (the influence of the oracle of Apollo on the tragic events, and the subsequent decrees of The Dioscuri).