“Andromache” is a tragedy by the ancient Greek playwright Euripides, first produced some time between about 428 and 424 BCE. It dramatizes the plight of Andromache, wife of the dead Trojan hero Hector, during her life in the years after the end of the Trojan War as the slave and concubine of Achilles‘ son, Neoptolemus. 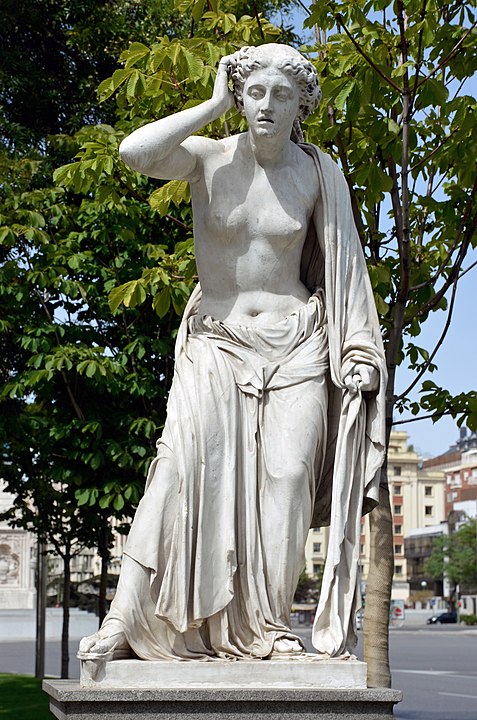 As background to the events of the play, Andromache was the wife of the Trojan hero Hector, who was slain by Achilles during the Trojan War. At the end of the war, their young child Astyanax was thrown off the Trojan walls by the Greeks for fear that he would grow up and avenge his father and city, and Andromache was made a slave of Achilles‘ son, Neoptolemus (as described in Euripides‘ play “The Trojan Women”).

Later, Andromache had a child, Molossus, with Neoptolemus, but then Neoptolemus married Hermione, daughter of the Spartan king Menelaus and Helen, who became very jealous of the relationship between Andromache and Neoptolemus. Fearing for her life and the life of her son, (who represents the sole heir to the throne of Epirus), Andromache has hidden the child and sought refuge in the temple of Thetis.

While Neoptolemus is away at the oracle at Delphi, Hermione‘s father Menelaus arrives, claiming to have taken her son, and Andromache resigns herself to his power and lets herself be led away from the safety of the holy altar. Menelaus now threatens both mother and son with death, and they are saved only at the last minute by old Peleus, who defends her and releases Andromache from both death and bondage.

After the failure of Menelaus‘ plan, Hermione has a sudden change of heart, and attempts suicide, although she is saved from death by her servants. Hermione now lives in fear of Neoptolemus‘ wrath for attempting to have Andromache and Molossus killed and, when her cousin Orestes arrives as a visitor to Neoptolemus‘ household, Hermione entreats him to take her away with him. Orestes (to whom Hermione had been promised as wife some years ago) consents and Hermione is escorted away by her kinsman. 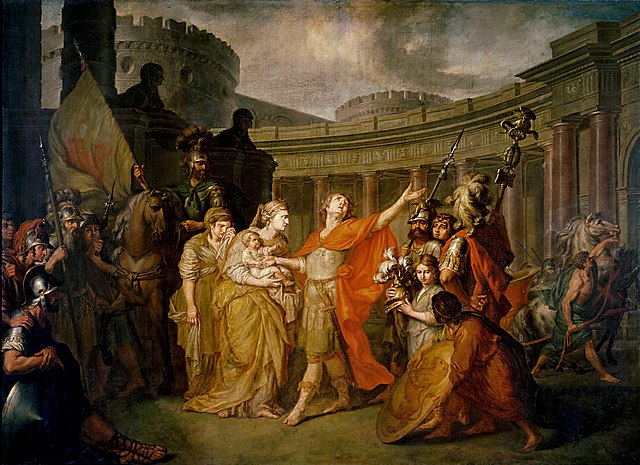 News soon comes to the household that Neoptolemus has been killed by the citizens of Delphi, as contrived by Orestes and Apollo. The demi-goddess Thetis, mother of Achilles and grandmother of Neoptolemus, arrives as the “deus ex machina” and orders Neoptolemus‘ burial in Delphi and commands that Andromache and her son be given their freedom and that Andromache is to marry Hector‘s brother, Helenus.

Old Peleus is greatly saddened by the news of Neoptolemus‘ death, but he is comforted by his divine wife, Thetis, who promises him divinity and reunion with their son, Achilles. Molossus, the child of Neoptolemus and Andromache, is to go on to become the ancestor of a line of kings in the Epirus region of north-western Greece.

The play has a somewhat confusing tripartite focus, as it attempts to simultaneously follow the plight of Andromache and her son, Hermione and also Peleus, (as well as introducing the figure of Orestes, almost as a cameo appearance, towards the end), and this has lowered the play’s reception among the critics over time. This lack of a central character has baffled many scholars who have been searching for an Aristotelian dramatic unity, although others have seen it as a note of originality and experimentation on Euripides‘ part. It has also been observed that, after an exciting beginning, most of the original characters in the play disappear and the interest is rather dissipated, and the play’s ending seems a little hackneyed and contrived.

It is, however, full of some unexpected twists. For instance, the foreigner Andromache is the one who bears herself with dignity, while the Greeks Hermione and Menelaus proceed with murderous impiety. There is a certain amount of misogynistic ranting in the play, as there is in many other plays from the period, but, interestingly, in this play it mainly comes from a woman, Hermione (and even Andromache calls women a plague on mankind).

The odious character which the poet attributes to the Spartan king Menelaus has been seen as according with the feeling against Sparta which prevailed in Athens at the time the play was written, during the early years of the Peloponnesian War between the two city-states. Menelaus is portrayed as an arrogant tyrant, and his daughter Hermione as grasping, lecherous and murderous. Both Peleus and Andromache curse Sparta several times during the play.

The tragedy of war is touched on (we see it through the eyes of Andromache, married to the slayer of her beloved husband and father, and we see it through the eyes of Peleus, who has lost his only son, Achilles), and the effects of war on both the conquerors and the conquered is certainly a major theme in the play. But Euripides wisely picks the relatively safe and distant Trojan War as the subject rather than anything closer to the hearts of his Athenian audience.

Another main theme is the role and nature of women, as explored through the conflict between the contrasting figures of Andromache and Hermione. Andromache claims to be a more legitimate wife to Neoptolemus than the childless Hermione, and argues that a wife maintains her husband’s affections by virtuous behaviour rather than by wealth and beauty.