“The Wasps“ (Gr: “Sphekes“) is a comedy by the ancient greek playwright Aristophanes, first staged at the Lenaia festival of 422 BCE. It is considered by some to be one of the world’s great comedies, and perhaps exemplifies the conventions of Old Comedy better than any other play. It pokes satirical fun at the Athenian demagogue Cleon and his power-base, the law courts, in a story about the old juror Philocleon who is addicted to his jury work and his son Bdelycleon’s ill-fated attempts to reform him. 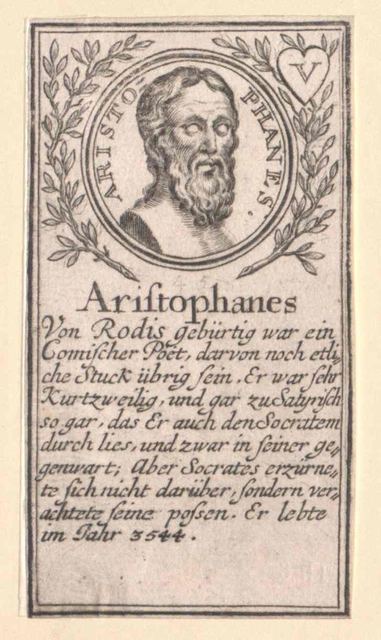 As the play opens, two slaves, Sosias and Xanthias, are sleeping in the street outside a house which is spread with a large net, and a third man, their master Bdelycleon, is asleep on top of an exterior wall with a view into the inner courtyard. The slaves wake and reveal that they are keeping guard over a “monster”, their master’s father, who has an unusual disease. Rather than being addicted to gambling, drink or good times, he is addicted to the law court, and his name is Philocleon (suggesting that he might actually be addicted to Cleon).

Symptoms of the old man’s addiction include irregular sleep, obsessional thinking, paranoia, poor hygiene and hoarding, and all counselling, medical treatment and travel have so far failed to solve the problem, so that his son has resorted to turning the house into a prison to keep the old man away from the law courts.

Despite the vigilance of the slaves, Philocleon surprises them all by emerging from the chimney, disguised as smoke. Bdelycleon manages to push him back inside, and other attempts at escape are also barely foiled. As the household settles down to some more sleep, the Chorus of old decrepit jurors arrives. When they learn that their old comrade is imprisoned, they leap to his defense, swarming around Bdelycleon and his slaves like wasps. At the end of this fray, Philocleon is still barely in his son’s custody and both sides are willing to settle the issue peacefully through debate.

Father and son then debate the matter, and Philocleon describes how he enjoys the flattering attentions of the rich and powerful men who appeal to him for a favourable verdict, as well as the freedom to interpret the law as he pleases (since his decisions are never subjected to review), and his juror’s pay gives him independence and authority within his own household. Bdelycleon responds by arguing that jurors are in fact subject to the demands of petty officials and anyway get paid less than they deserve because most of the revenues from the empire go into the private treasuries of politicians like Cleon. 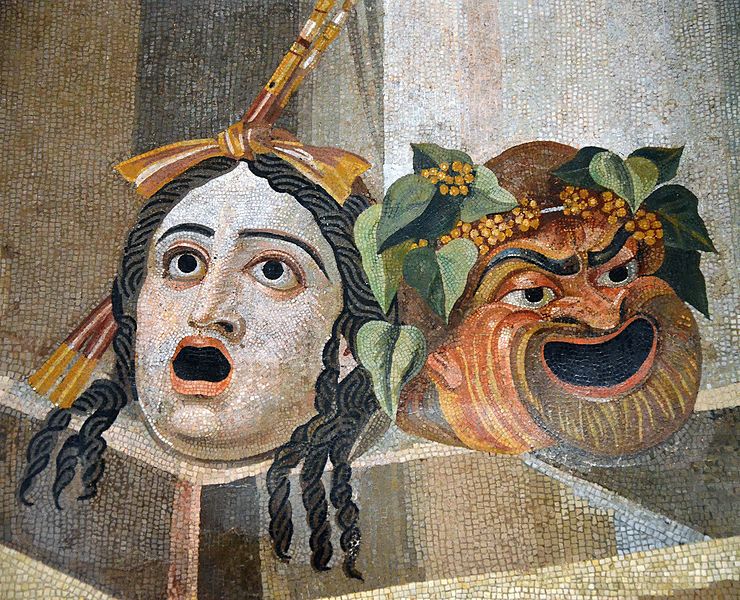 This argument which wins over the Chorus and, to make the transition easier for his father, Bdelycleon offers to turn the house into a courtroom and to pay him a juror’s fee to judge domestic disputes. The first case is a dispute between the household dogs, with one dog (who looks like Cleon) accusing the other dog (who looks like Laches) of stealing a cheese and not sharing it. Bdelycleon says a few words on behalf of the household implements which are the witnesses for the defence, and brings on the accused dog’s puppies to soften the heart of the old juror. Although Philocleon is not fooled by these devices, he is easily tricked by his son into putting his vote into the urn for acquittal, and the shocked old juror is taken off to prepare for some entertainment later that night.

The Chorus then praises the author for standing up to unworthy monsters like Cleon who gobble up imperial revenues, and it chastises the audience for failing to appreciate the merits of the author’s previous play (“The Clouds”).

Father and son then return to the stage, with Bdelycleon trying to convince his father to wear a fancy woollen garment and fashionable Spartan footwear to the sophisticated dinner party to be held that evening. The old man is suspicious of the new clothes and prefers his old juryman’s cloak and his old shoes, but the fancy clothes are forced upon him anyway, and he is instructed in the kind of manners and conversation that the other guests will expect of him.

After the father and son leave the stage, a household slave arrives with news for the audience that the old man has behaved appalling at the dinner party, having become abusively drunk and insulted all his son’s fashionable friends, and is now assaulting anyone he meets on the way home. The drunk Philocleon comes on stage with a pretty girl on his arm and aggrieved victims on his heels. Bdelycleon angrily remonstrates with his father for kidnapping the girl from the party and tries to take the girl back to the party by force, but his father knocks him down.

As others arrive with grievances against Philocleon, demanding compensation and threatening legal action, he makes an ironic attempt to talk his way out of trouble like a sophisticated man of the world, but it only serves to inflame the situation further and finally his alarmed son drags him away. The Chorus sings briefly about how difficult it is for men to change their habits and it commends the son for filial devotion, after which the entire cast returns to the stage for some spirited dancing by Philocleon in a contest with the sons of the playwright Carcinnus. 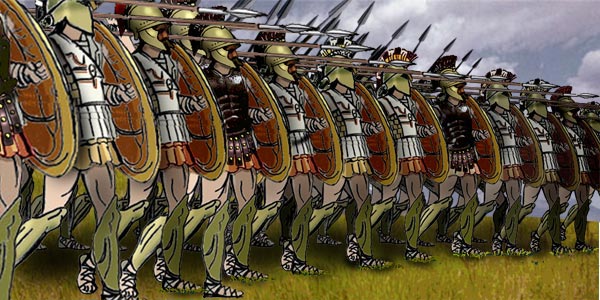 After a significant victory against its rival, Sparta, in the Battle of Sphacteria of 425 BCE, Athens was enjoying a brief respite from the Peloponnesian War at the time “The Wasps” was produced. The populist politician and leader of the pro-war faction, Cleon, had succeeded Pericles as the dominant speaker in the Athenian assembly and was increasingly able to manipulate the courts for political and personal ends (including providing jurors with cases to try to keep up their pay). Aristophanes, who had been prosecuted previously by Cleon for slandering the polis with his second (lost) play “The Babylonians”, returned in “The Wasps” to the unrelenting attack on Cleon he had begun in “The Knights“, presenting him as a treacherous dog manipulating a corrupted legal process for personal gain.

With this in mind, it is apt that the two main characters in the play are called Philocleon (“lover of Cleon”, portrayed as a wild and cantankerous old man, addicted to litigation and the excessive use of the court system) and Bdelycleon (“hater of Cleon”, portrayed as a reasonable, law-abiding and civilized young man). There is clearly an overt political suggestion that Athens needs to sweep away the old corrupt regime, and replace it with a new youthful order of decency and honesty.

However, the entire jury system is also a target of Aristophanes‘ satire: jurors at that time received no instruction and there was no judge as such to make sure the law was followed (the magistrate in charge simply kept order and kept the proceedings moving). There was no appeal from the decisions of such juries, few rules of evidence (and all sorts of personal attacks, second hand opinion and other forms of doubtful evidence were admitted in court) and juries were capable of acting like mobs, whipped up into making all sorts of wrong decisions by a skilful public speaker (like Cleon). 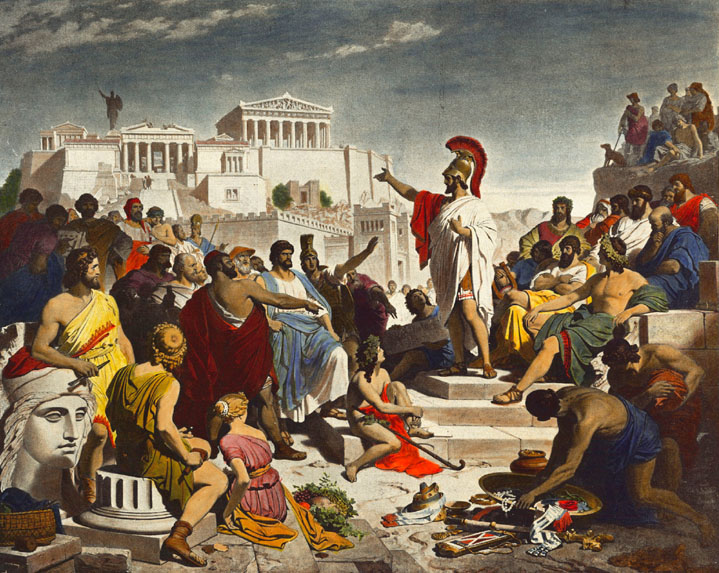 As with all of Aristophanes‘ plays (and Old Comedy plays in general), “The Wasps”incorporates a huge number of topical references to personalities and places well known to the Athenian audience, but which are largely lost on us today.

“The Wasps” is often considered one of the world’s great comedies, largely due to the depth of characterization of the central figure, Philocleon, as well as his son, Bdelycleon, and even the Chorus of the old jurors (the “wasps” of the title). Philocleon in particular is a complex character whose actions have comic significance, psychological significance and allegorical significance. Although a funny, slapstick character, he is also quick-witted, crafty, excessive, selfish, stubborn, lively and full of energy, and is an appealing character despite his philandering, his irresponsibility as a juror and his early career as a thief and a coward.

The debilitating effects of old age and the dehumanizing effects of an addiction, however, are sombre themes that lift the action beyond the scope of a mere farce. “The Wasps” is also thought to exemplify all the conventions and structural elements of Old Comedy at their best, and represents the zenith of the Old Comedy tradition.