“Thesmophoriazusae” (literally meaning “The Women Celebrating the Festival of the Thesmophoria”, sometimes also called “The Poet and the Women”), is a comedy by the ancient Greek playwright Aristophanes, first staged in 411 BCE (the same year as his “Lysistrata”) probably at the City Dionysia drama fastival. It is considered one of Aristophanes‘ most brilliant parodies of Athenian society and like “Lysistrata”, it focuses particularly on the subversive role of women in a male-dominated society. The general plot follows the summoning of the great Greek playwright Euripides by the women of Athens to account for the misogynistic portrayal of women in his plays. 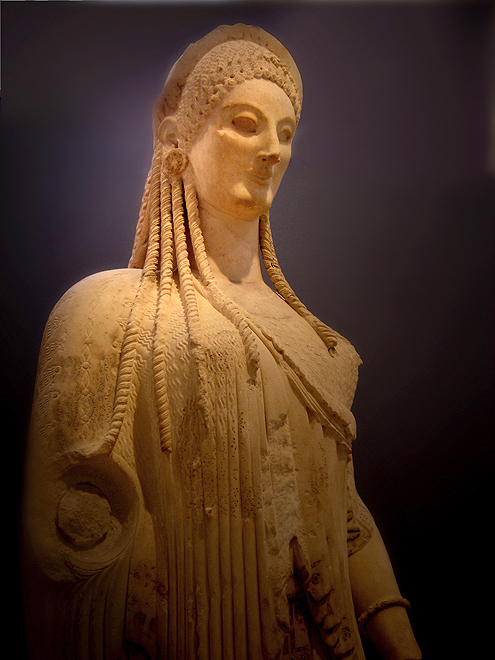 The playwright Euripides complains to his aged in-law, Mnesilochus, that he has been summoned to appear for trial and judgment before the women of Athens for his portrayal of women in his plays as mad, murderous and sexually depraved, and he is worried that the women of Athens are going to kill him. They are planning to use the festival of the Thesmophoria (an annual women-only fertility celebration dedicated to Demeter and Persephone) as an opportunity to debate a suitable choice of revenge on him.

Euripides asks a fellow tragedian, the effeminate poet Agathon, to go to the festival in order to spy for him and to be his advocate at the festival. Agathon, however, believes that the women of Athens may be jealous of him and he refuses to attend the festival for fear of being discovered. Mnesilochus offers to go in Agathon’s place, and Euripides shaves him, dresses him in women’s clothes (borrowed from Agathon) and sends him off to the Thesmophorion.

At the festival, the women are seen conducting a disciplined and organized democratic assembly, with appointed officials and carefully maintained records and procedures. Top of the agenda for that day is Euripides, and two women summarize their grievances against him: Micca (who complains that Euripides has taught men not to trust women, which has made it more difficult for women to help themselves to the household stores) and a myrtle vendor (who complains that his plays promote atheism, which makes it more difficult for her to sell her myrtle wreathes). 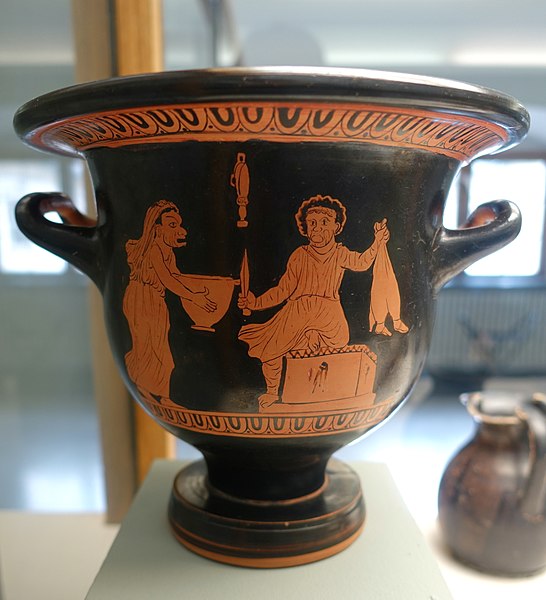 The disguised Mnesilochus then speaks up, declaring that the behaviour of women is actually far worse than Euripides has represented it, and recites in excruciating detail his own (imaginary) sins as a married woman, including a sexual escapade with a boyfriend in a tryst involving a laurel tree and a statue of Apollo. The assembly is outraged and, when the Athenian “ambassador” for women (Cleisthenes, a notoriously effete homosexual) brings the alarming news that a man disguised as a woman is spying upon them on behalf of Euripides, suspicion immediately falls upon Mnesilochus, being the only member of the group that nobody can identify. They remove his clothes and discover that he is indeed a man.

In a parody of a famous scene from Euripides‘ lost play “Telephus”, Mnesilochus flees for sactuary to the altar, grabbing Micca’s baby and threatening to kill it unless the women release him. Micca’s “baby” actually turns out to be a wine skin dressed up in baby’s clothes, but Mnesilochus continues to threaten it with a knife and Micca (a devout tippler) pleads for its release. The assembly will not negotiate with Mnesilochus, however, and he stabs the “baby” anyway, as Micca desperately tries to catch its blood/wine in a pan.

Meanwhile, the male authorities have been notified of the illegal presence of a man at a women-only festival, and Mnesilochus is arrested and strapped to a plank by the authorities.Â Euripides, in various farcical attempts to rescue Mnesilochus based on scenes from his own recent plays, first comes disguised as Menelaus (from his play “Helen”) to which Mnesilochus responds by playing out the role of Helen, and then as Echo and then Perseus (from his lost “Andromeda”), in which role he swoops heroically across the stage as a “deus ex machina” on aÂ theatrical crane, to which Mnesilochus responds by acting out the role of Andromeda.

However, when all these mad schemes inevitably fail, Euripides then decides to appear as himself, and quickly negotiates a peace with the Chorus of women, securing their co-operation with a simple promise not to insult them in his future plays. Mnesilochus, who is still a prisoner of the Athenian state, is finally released by Euripides disguised as an old lady attended by a dancing girl playing the flute (whose charms entice away the guard), and with the help of the Chorus.

“Thesmophoriazusae” is notable for its reversal of sexual stereotypes, where the ridiculous men dress as women and the women are organized and dignified (right down to their own version of the democratic Athenian assembly). The play points out how both tragic and comic poets in classical Athens tend to reinforce sexual stereotyping, even when they appear to demonstrate empathy with the female condition, and how women in classical literature are typically considered as irrational creatures in need of protection from themselves and from others.

The sexual role-reversals can also be understood to have a broader political significance, though. The comparison of the warrior ethos of older generations versus the effete intellectualism of the younger generation is a debate that recurs in various forms throughout the plays of Aristophanes (for example, it is dealt with in detail in “The Frogs”, where the warrior ethos of Aeschylus is contrasted with the intellectual and philosophical quibbling of Euripides). In “Thesmophoriazusae”, the Chorus of women points out how women have preserved their heritage (as represented by the weaving shuttle, the wool-basket and the parasol), while the men have all but lost their spears and shields.

Although there is almost no direct mention of the Peloponnesian War in the play – the stupidity of the war with Sparta, the criminal motives behind it and the desire for peace are major themes in several of Aristophanes‘ earlier plays – the peace that Euripides very easily negotiates with the women at the end of the play (after all his combative schemes have failed) could be interpreted as a pro-peace message.

In addition to the usual political targets of Aristophanes‘ wit, various literary traditions, fashions and poets are particularly subject to comment and parody in “Thesmophoriazusae”. His theatrical rival Euripides is clearly the main target, but several other contemporaries also receive derogatory mentions, including Agathon, Phrynicus, Ibycus, Anacreon, Alcaeus, Philocles, Xenocles and Theognis. 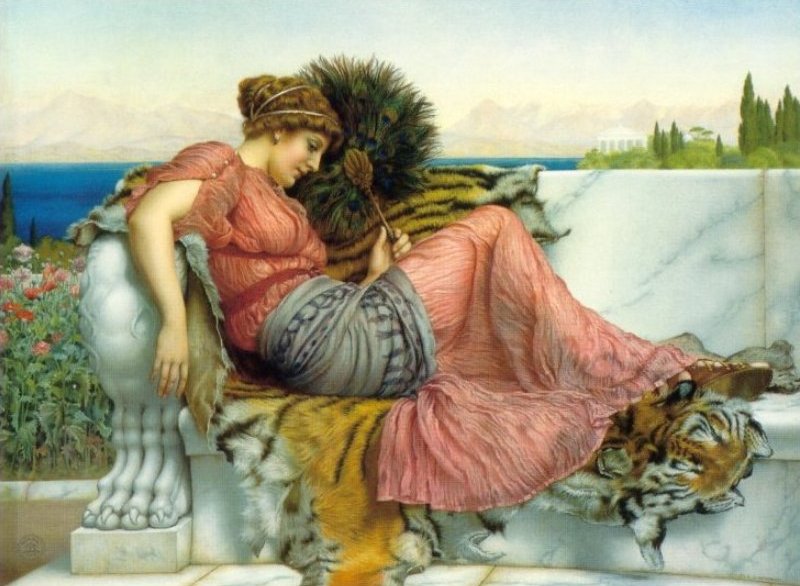 The appearance of Mnesilochus dressed in women’s clothes, the examination of his person to discover his true sex and his attempts to protect himself, all afford fine opportunities for a display of the broadest Aristophanic humour. But the latter part of the play, where various pieces of Euripides are burlesqued, would have been particularly funny to the discerning Athenian audience familiar with every piece and almost every line parodied, and the actors would have been trained to imitate every trick and mannerism of appearance and delivery of the tragic actors who originally played the parts.

In “Thesmophoriazusae”, Aristophanes continued his gradual trend away from the rather restrictive conventions of Old Comedy in favour of a simpler approach, a trend that was to reach its fulfilment in the New Comedy of Menander. For instance, the parodos (the initial entry of the Chorus) is uncharacteristically quiet; there is just one short parabasis, in which the Chorus never speaks out of character; and there is no real conventional agon (and what debate there is does not produce the traditional victory for the protagonist, but is instead followed by a second heated argument in long, iambic verses).

The tension of the play is maintained almost until the very end, when Euripides negotiates a peace and Mnesilochus is released, unlike the tradition in Old Comedy where dramatic tension is sacrificed quite early in the play with the protagonist’s victory in the agon. Also, Euripides and Mnesilochus are too busy making good their escape to have time for a proper traditional Old Comedy exodos (a joke that would not have been lost on the original audience).