“Peace” (Gr: “Eirene”) is a comedy by the ancient Greek playwright Aristophanes. It won second prize at the City Dionysia where it was staged just before the ratification of the Peace of Nicias in 421 BCE, which promised (but, ultimately, failed) to end the ten year old Peloponnesian War.

It tells the story of Trygaeus, a middle-aged Athenian who takes it upon himself to rescue the allegorical figure of Peace and thereby bring about an end to the Peloponnesian War. In doing so, he earns the gratitude of farmers while bankrupting various tradesmen who had profited from the hostilities, and he celebrates his triumph by marrying Harvest, a companion of Peace and Festival. 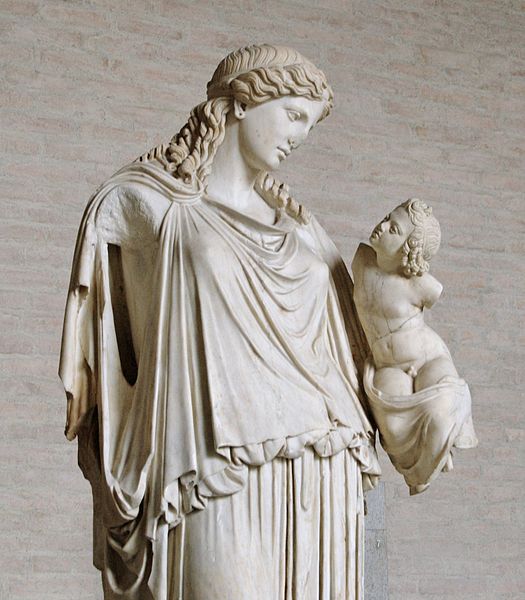 Two slaves of Trygaeus are introduced, outside an ordinary house in Athens, kneading what appears to be unusually large lumps of dough. We soon learn that it is not dough at all but excrement (from various sources) which is to be fed to the giant dung beetle that their master intends flying to a private audience with the gods. Trygaeus himself then appears above the house on the back of the dung beetle, hovering in an alarmingly unsteady manner, while his slaves, neighbours and children plead with him to come back down to earth.

He explains that his mission is to reason with the gods about the Peloponnesian War and, if necessary, to prosecute them for treason against Greece, and he soars away towards the heavens. Arriving at the house of the gods, Trygaeus discovers that only Hermes is home, the other gods having packed up and departed for some remote refuge where they hope never to be troubled again by the war or the prayers of humankind. Hermes himself is only there making some final arrangements for the new occupant of the house, War, who has already moved in. Peace, he is informed, is imprisoned in a cave nearby.

War then comes on stage, carrying a gigantic mortar in which he intends to continue grinding the Greeks to paste, but he complains that he no longer has a pestle to use with his mortar, as his old pestles, Cleon and Brasidas (the leaders of the pro-war factions in Athens and Sparta respectively) are both dead, recently perished in battle.

While War goes to find a new pestle, Trygaeus calls on Greeks everywhere to come and help him set Peace free while there is still time. A Chorus of excited Greeks from various city-states arrives, dancing frantically in their excitement. They get to work pulling boulders from the cave’s mouth, along with a Chorus of farmers, and eventually the beautiful Peace and her comely companions, Festival and Harvest, emerge. Hermes explains that she would have been freed much earlier, except that the Athenian assembly kept voting against it.

Trygaeus apologizes to Peace on behalf of his countrymen, and updates her on the latest theatre gossip from Athens. He leaves her to enjoy her freedom while he sets off again for Athens, taking Harvest and Festival back with him (Harvest to be his wife), while the Chorus praises the author for his originality as a dramatist, for his courageous opposition to monsters like Cleon and for his genial disposition. 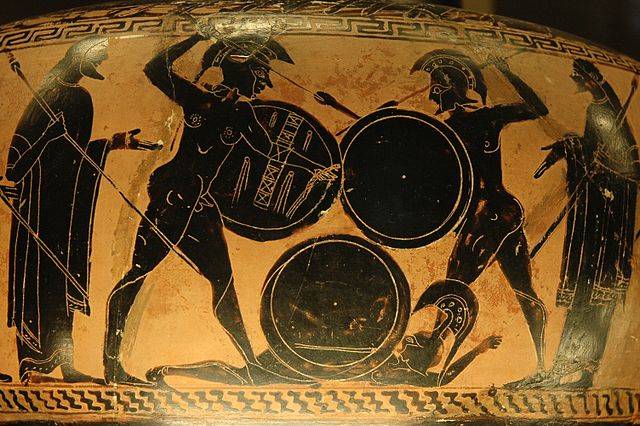 Trygaeus returns to the stage, declaring that the audience looked like a bunch of rascals when seen from the heavens, and that they look even worse when seen up close. He sends Harvest indoors to prepare for their wedding, and delivers Festival to the Athenian leaders sitting in the front row. He then prepares for a religious service in honour of Peace. The smell of the roasting sacrificial lamb soon attracts an oracle-monger, who hovers about the scene in quest of a free meal, but he is soon driven off. As Trygaeus joins Harvest indoors to prepare for his wedding, the Chorus praises the idyllic country life during peacetime, although it also bitterly recalls how different things were only just recently, in time of war.

Trygaeus returns to the stage, dressed for the wedding festivities, and local tradesmen and merchants begin to arrive. The sickle-maker and jar-maker, whose businesses are flourishing again now that peace has returned, present Trygaeus with wedding presents. Others, however, are not faring so well with the new peace and Trygaeus offers suggestions to some of them about what they can do with their merchandise (e.g. helmet crests can be used as dusters, spears as vine props, breastplates as chamber pots, trumpets as scales for weighing figs and helmets as mixing bowls for Egyptian emetics and enemas).

One of the guests’ children begins reciting Homer‘s epic song of war, but Trygaeus promptly sends him away. He announces the commencement of the wedding feast and opens up the house for celebrations. 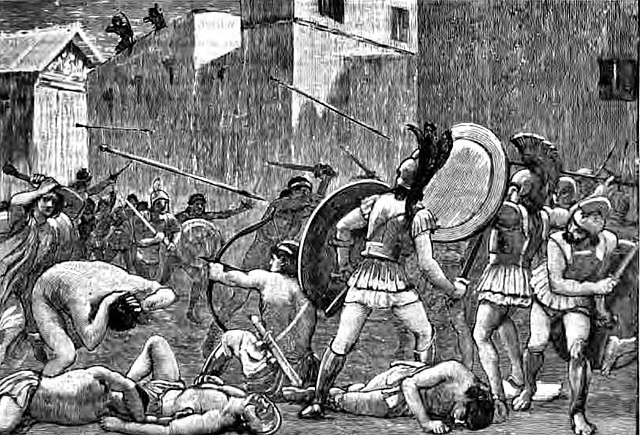 The play was first staged at the the City Dionysia dramatic contest in Athens, just a few days before the ratification of the Peace of Nicias in 421 BCE, which promised to end the ten year old Peloponnesian War (although in the end, the peace only lasted some six years, even that marked by constant skirmishing in and around the Peloponnese, and the war eventually rumbled on until 404 BCE). The play is notable for its optimism and its joyous anticipation of peace and for its celebration of a return to an idyllic rural life.

However, it also sounds a note of caution and bitterness in the memory of lost opportunities, and the ending of the play is not happy for everyone. The Chorus’ joyful celebration of peace is tinged with bitter reflections on the mistakes of past leaders, and Trygaeus expresses anxious fears for the future of the peace since events are still subject to bad leadership. The recital of the militaristic verses from Homer by the son of Lamachus towards the end of the play are a dramatic indication that war is deeply rooted in Greek culture and that it may still command the imagination of a new generation.

As in all of Aristophanes‘ plays, the jokes are numerous, the action is wildly absurd and the satire is savage. Cleon, the pro-war populist leader of Athens, is once again singled out as a target for the author’s wit even though he had died in battle just a few months earlier (as had his Spartan counterpart Brasidas). However, unusually, Cleon is granted at least a modicum of respect by Aristophanes in this play.

Aristophanes‘ love of rural life and his nostalgia for simpler times comes through strongly in the play. His vision of peace involves a return to the country and its routines, an association he expresses in terms of religious and allegorical imagery. However, in spite of these mythical and religious contexts, political action emerges as the decisive factor in human affairs, and the gods are shown to be distant figures. Mortals must therefore rely on their own initiative, as represented by the Chorus of Greeks working together to release Peace from captivity.

Unusually for an Old Comedy play, there is no traditional agon or debate in “Peace”, nor is there even an antagonist to represent a pro-war viewpoint, apart from apart from the allegorical character of War, a monstrosity incapable of eloquence. Some have seen “Peace” as an early development away from Old Comedy and towards later New Comedy.