“Seven Against Thebes” (Gr: “Hepta epi Thebas”; Lat: “Septem contra Thebas”) is a tragedy by the ancient Greek playwright Aeschylus, dating from 467 BCE. It is the classic statement of the myth (also covered by Euripides‘ play “The Phoenician Women”) of the battle for the city of Thebes after the shamed Oedipus relinquished power to his two sons, Eteocles and Polynices 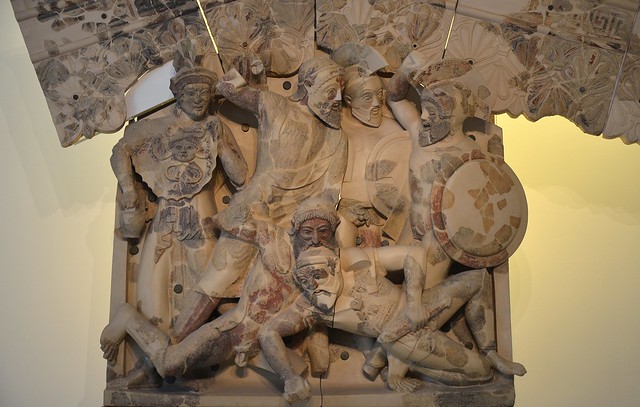 “Seven Against Thebes” tells how, when the shamed Oedipus stepped down as king of Thebes, he gave the kingdom to his two sons, Eteocles and Polynices (Polyneices), on the understanding that they would alternate the throne every year. However, after the first year, Eteocles refused to step down and drove out Polynices, who fled to Argos. There, Polynices and the Argive king Adrastus gathered together a force under seven captains or leaders (Tydeus, Capaneus, Eteoclus, Hippomedon, Parthenopaeus, Amphiaraus and Polynices himself).

As the play opens, Polynices and his Argive supporters are about to attack and lay seige to his own home city of Thebes in order to claim the throne. The reigning king, his brother Eteocles, appears and warns the people, calling them to arms. He appoints Theban commanders (Creon, Megareus, Poriclymenus, Melanippus, Polyphontes, Hyperbius, Actor, Lasthenes and himself) to defend the seven gates of the city against the seven attacking leaders. When his brother Polynices is revealed to be one of the seven attacking captains, Eteocles resolves to meet him in single combat.

The “battle” itself occurs off-stage, during a choral ode, after which a messenger enters and announces that Eteocles and Polynices have killed each other. The other six attacking chieftains are all slain, and the enemy beaten off. The bodies of the two princes are brought on stage, and the Chorus mourns them, as do the sisters of the killed men, Antigone and Ismene, who alone are left of the royal house.

It was first performed in 467 BCE when it won first prize in the annual City Dionysia drama competition, as the third play in a Thebes trilogy. The first first two (lost) plays of the trilogy were “Laius” and “Oedipus”, which dealt with the first two generations of the Oedipus myth, while “Seven Against Thebes” follows the story of Oedipus‘ two sons, Eteocles and Polynices, who die by each other’s hands in the fight for the Theban crown. The concluding satyr play was called “The Sphinx” (also lost).

The original kernel of the myth of the “Seven”, the seven Argive generals who threatened the ancient city of Thebes, goes back to Bronze Age history a generation or so before the Trojan War (the 12th or 13th Century BCE). The drama has very little plot as such, and much of the play consists of a scout or messenger describing each of the seven captains that lead the Argive army against Thebes (down to the devices on their respective shields) and Eteocles‘ announcements of which Theban commander he will send against each Argive attacker. 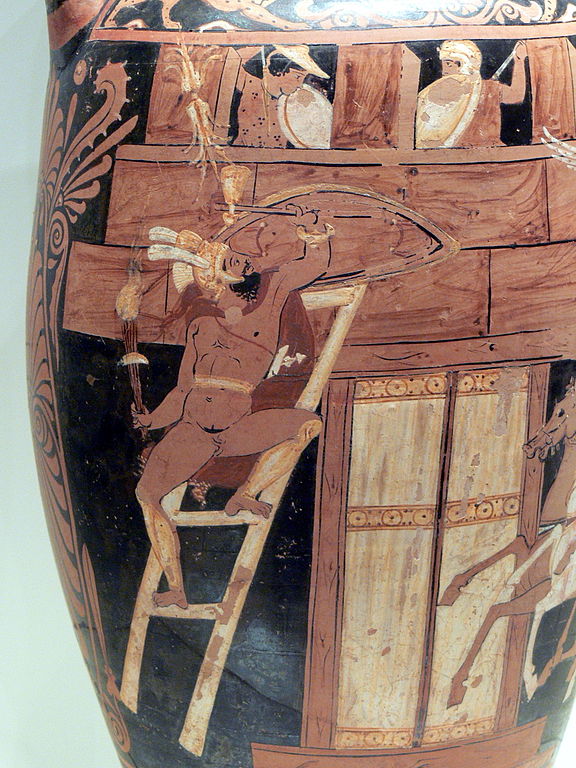 Unlike Aeschylus‘ very early plays, however, the opening of the play is no longer lyric but dramatic. It also contains the first passage of general reflexion of life (which later became a regular feature of tragedy), where Eteocles muses on the fate which involves an innocent man in the company of the wicked so that he unjustly has to share their deserved fate. The Chorus in the play, which has more lines than any other character, consists of the women of Thebes.

It explores themes of fate and the interference of the gods in human affairs, as well as the polis (or city) as a vital development of human civilization (a theme which would recur through many of Aeschylus‘ later plays).

Due to the popularity of Sophocles‘ later play “Antigone”, the ending of “Seven Against Thebes” was rewritten about fifty years after Aeschylus‘ death, with Antigone announcing her intention to defy the announced edict against burying Polynices.