Conflicts in The Odyssey: A Character’s Struggle 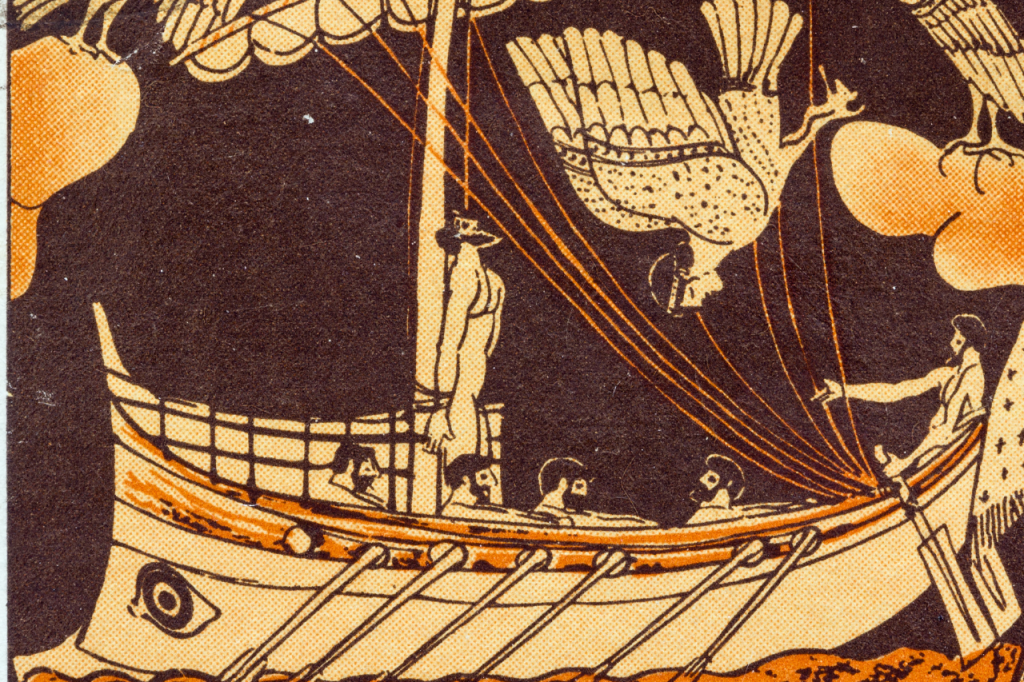 In Odysseus’ journey home, he faces significant conflicts in The Odyssey. The various challenges Odysseus faces are essentially the center of Homer’s classic, but what are these antagonisms he encounters? To understand this, we will go over the play.

Odysseus Journey: The Start of It All

Odysseus’ plight begins with his journey back to Ithaca. Once he arrives in Ismaros, he and his men, high on the spoils of war, raid villages and enslave their men. Their foolish actions anger Zeus, who decides to send them a storm, forcing them to dock on Djerba then Sicily.

In Sicily, the island of the cyclops, he encounters Poseidon’s son, Polyphemus. He blinds Polyphemus in his escape from the island and garners the ire of the Greek god of the sea, which marks the first of the two main conflicts in the epic.

Two Main Conflicts in The Odyssey

Odysseus, a war hero, anticipates returning to his homeland after participating in the Trojan war. Little did he know that his journey home would be full of challenges he must face. One, with a divine antagonist, and another with mortal enemies.

Odysseus angers multiple gods in his journey home. In retaliation to Odysseus and his men’s actions, the gods punish them thoroughly by throwing challenges upon them.

The majority of the conflicts in The Odyssey stem from the gods’ ires; they are known to be impatient and unforgiving gods who tamper with mortal affairs. These gods spare no one, not even Odysseus himself.

Odysseus and his men arrive in Sicily, the island of the cyclops, and stumble upon a cave filled with food and wine. Odysseus and 12 of his men venture off into the cave and start feasting on the rations.

The cave owner, Polyphemus, arrives, and Odysseus, confident that he had the favor of the gods, demands that Polyphemus bid them a good journey and offer them food and gold as per custom. Instead, Polyphemus eats two of his men and closes the opening of the cave.

After several days of being trapped inside Polyphemus’ cave, Odysseus devises a plan to escape; he takes a portion of Polyphemus’ club and sharpens it into a spear.

Odysseus then offers the giant some wine and gets him drunk. Once Polyphemus was inebriated, Odysseus stabs him in the eye and quickly goes back to hiding. The next day, Polyphemus opens his cave to walk his sheep, touching them one by one to make sure none of Odysseus’ men escape.

He did not realize that Odysseus and his men tied themselves to the bellies of the sheep, thus, escaping without the giant’s knowledge.

Once on the ship, Odysseus yells out his name and instructs Polyphemus to tell how he blinded the cyclops. Polyphemus prays to his father, Poseidon, to get revenge for his injury, inciting the Greek god’s wrath. This is how Odysseus finds himself with a divine antagonist.

Poseidon, the god of the sea, acts as a divine antagonist in Homer’s classic. He complicates the main character’s journey towards Ithaca by making the waves unruly in their departure.

However, the patron of seafaring Phaeacians ironically and unknowingly helps Odysseus return home to Ithaca. The Phaeacians that Poseidon so dearly protects escorts our young hero home, seeing him to safety. 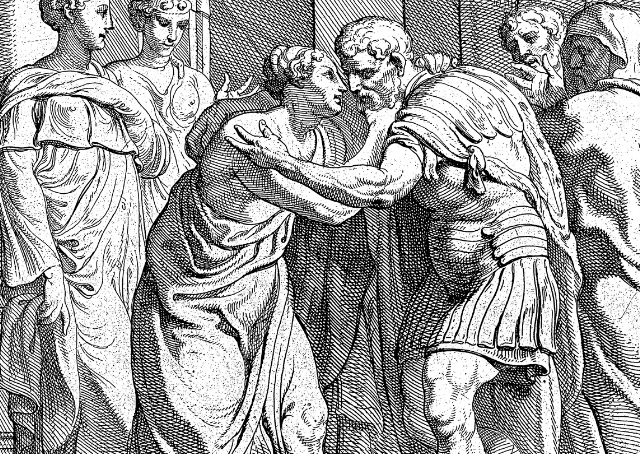 Going Back Home to Ithaca

After being trapped in Calypso’s Island for seven years, Hermes convinces the nymph to release Odysseus from her island and allow him to go back home. Odysseus builds a small boat and departs the island, anticipating his arrival in Ithaca.

Poseidon, his divine antagonist, catches wind of Odysseus’ journey and rages up a storm. The storm almost drowns Odysseus, and he was washed along the Phaeacians’ shore. He recounts the tale of his trip to their king, beginning from the events of the Trojan War up to his imprisonment on Calypso’s island.

The king vows to send Odysseus home safely, giving him a ship and some men to guide him on his journey.

He arrives in Ithaca after several days, and there he encounters the Greek goddess Athena in disguise. The goddess of war recounts the tale of Penelope’s suitors, urging Odysseus to hide his identity and enter the competition for the Queen’s hand.

The Start of the Second Conflict

Once Odysseus arrives in the palace, he immediately gets the attention of his wife, Penelope. The Queen, known to have strong wits, quickly announces the challenge each suitor must face to gain her hand in marriage.

First, each suitor must wield her previous husband’s bow and shoot an arrow across 12 rings. Then, one by one, the suitors step up to the podium and try to wield Odysseus’ bow, every one of them failing. Finally, Odysseus, still disguised as a beggar, efficiently completes the task at hand and points his weapons towards Penelope’s suitors, his mortal antagonists.

He kills every one of them and then flees off to the outskirts of Ithaca, where the families of the suitors ambush him. They seek revenge for the death of their precious sons and demand Odysseus’ head. Athena immediately travels to our protagonist’s side and brings peace to the land, allowing Odysseus to rightfully and peacefully rule as king in Ithaca.

The suitors of Penelope act as our hero’s mortal antagonists. They pose a threat to Odysseus’ wife, family, and home. The suitors threaten his home by literally eating them out of their house with their extravagant taste and insatiable appetites, exhibiting greed and egomania.

If one were to rule over Ithaca, the land would be riddled with poverty and hunger as each of Penelope’s suitors is portrayed to only desire entertainment and pleasure.

The suitors threaten Odysseus’ family by not only wanting to marry his wife but also scheming to murder his son, Telemachus. The young prince journeys out of Ithaca to investigate his father’s whereabouts.

The suitors plan to ambush the young man upon his arrival, but to their dismay, get killed instead. This is all thanks to both Athena and Penelope. Penelope warns him of the ambush, and Athena tells him how to avoid the trap, allowing him to return home safely and help his father massacre the rest of the suitors.

The conflicts in The Odyssey were intricately written to form various symbolic natures.

Let us summarize the main points of the article:

Conflicts are an essential part in a story because they help drive the plot. Without conflict, The Odyssey would have ended up as a boring recount of Odysseus’ journey home.