Choragos in Antigone: Could the Voice of Reason Have Saved Creon?

The Choragos in Antigone represents the advisors of Creon. Ostensibly, they were there to guide the king and give voice to the concerns of the people. In reality, his temper prevented them from being effective at all. The advisors should, by rights, carry the same weight of respect from the king as Tiresias, the blind prophet. They are made up of the city’s elders and prominent citizens.

Their deference to Creon and unwillingness to confront him about his stubbornness and poor judgment in his treatment of both Polynices and Antigone reinforce the impression of the king having a dangerously volatile temper. While they might have saved Creon from his own folly, their refusal to stand up openly to his authority delays his realization of his mistakes and ultimately doom him to suffer fate’s cruel justice.

What Is the Role of the Choragos in Antigone? 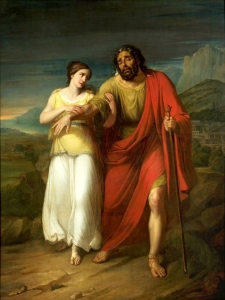 The elders and advisors act as a narrator, providing a backdrop to Creon’s behavior, and in some scenes, providing the audience information about events that happen off stage. So, if not to change the course of Creon’s fate, what is the role of the Choragos in Antigone? They give a reliable narration in a play in which the perception of each of the characters can be argued as valid, though they present opposite points of view.

Antigone fully believes in her mission as she tries to perform the final burial rites for her beloved brother. Creon equally believes that he is defending Thebes by refusing to honor a traitor. Both parties have what they see as valid and just points, backed by the gods themselves. The Choragos respect both Antigone’s passion for honoring her family and Creon’s place as king and act as the balance between the two extremes, giving depth to the storyline and providing shades of gray to an otherwise black-and-white presentation.

The First Appearance of the Chorus

The chorus in Antigone first appears following the opening scene.  Antigone and Ismene opened the play by plotting to bury Polynices. Antigone is set on her dangerous mission and Ismene fears for her sister’s safety and life as she defies the king. While the king is celebrating the defeat of the traitor Polynices, his nieces are conspiring to honor their dead brother, against his will and his decree. The first of the choral odes in Antigone is a celebration of praise for the victorious Eteocles. There is a brief lament for the brothers:

“For seven captains at seven gates, matched against seven, left the tribute of their panoplies to Zeus who turns the battle; save those two of cruel fate, who, born of one sire and one mother, set against each other their twain conquering spears, and are sharers in a common death.”

The chorus then goes on to call for celebration of Thebe’s victory, calling upon the god of celebration and debauchery, Bacchus. The conflict is ended, the warring brothers are dead. It’s time to bury the dead and celebrate the victory and acknowledge the new leadership of Creon, uncle, and the rightful king now that the male heirs of Oedipus are dead.

“But since Victory of glorious name hath come to us, with joy responsive to the joy of Thebe whose chariots are many, let us enjoy forgetfulness after the late wars, and visit all the temples of the gods with night-long dance and song; and may Bacchus be our leader, whose dancing shakes the land of Thebe.”

There is no thought of vengeance in the chorus. It is only Creon himself who seems to hate Polynices so much he’s willing to deny him the honor of his position, even in death. The thoughts of celebration are interrupted by Creon himself. He enters, having called for a meeting of the elders and leaders of the City to make an announcement.

He asserts that
“Eteocles, who hath fallen fighting for our city, in all renown of arms, shall be entombed, and crowned with every rite that follows the noblest dead to their rest. But for his brother, Polyneices,-who came back from exile, and sought to consume utterly with fire the city of his fathers and the shrines of his fathers’ gods,-sought to taste of kindred blood, and to lead the remnant into slavery;-touching this man, it hath been proclaimed to our people that none shall grace him with sepulture or lament, but leave him unburied, a corpse for birds and dogs to eat, a ghastly sight of shame

Such the spirit of my dealing; and never, by deed of mine, shall the wicked stand in honor before the just; but whoso hath good will to Thebes, he shall be honoured of me, in his life and in his death.”

King Creon and the Choragos 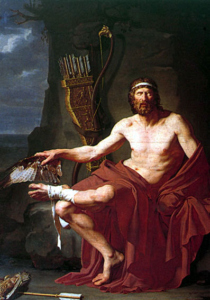 There is one small point of justice that Creon overlooks in his quest for power. Eteocles and Polynices were to alternate ruling Thebes. When Eteocles’ year of ruling was up, he refused to give the crown to Polynices, a refusal which led the deposed brother to gather an army and come against Thebes.

Creon’s disparate treatment of the two brothers shows clear favoritism. Although in Oedipus, he claimed he did not want to rule, Creon begins ruling by making a decree that validates Eteocles’ rule and shames Polynices for trying to stand against his brother. It is a clear warning to anyone who would challenge Creon’s place as king. The Antigone odes reveal the response of the elders and leaders of the City, providing a foil for Creon’s behavior and revealing how his rule is being perceived by the people of Thebes.

Creon has made the mandate clear, and now he calls upon the Choragos and the chorus to stand with him in his rule. The elders respond that they will uphold his right as king to make whatever decree he believes is necessary for the good of Thebes. It’s clear they want peace and are willing to pacify even an unreasonable ruler to keep peace and prevent more bloodshed.

They didn’t count on Antigone’s rebellion. It is only after her deed is revealed by the guard that the Leader dares speak against Creon’s harsh judgment, saying

“O king, my thoughts have long been whispering, can this deed, perchance, be e’en the work of gods?”

Creon responds that the gods do not honor the wicked and threatens that they will incur his wrath if they dare speak against his decision. The Chorus responds with what is commonly known as the Ode to Man, a speech that speaks of man’s struggle to overcome nature, perhaps a warning to Creon about his hubris and the stance he’s taking by defying the laws of the gods.

The Dilemma of the Choragos: Do They Pacify the King or Go Against the Gods?

The Choragos role in Antigone is to act as a warning to Creon against his foolish pride. They walk a thin line, both wanting to honor the king’s wishes and being unable to go against the natural 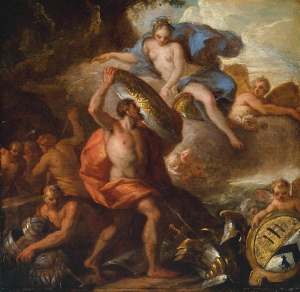 law of the gods. When Antigone is brought prisoner by the guards, to face Creon for her crime, they express dismay at her “folly.” Even then, they do not speak against Creon carrying out his verdict against her, though they try weakly to defend her:

“The maid shows herself a passionate child of passionate sire, and knows not how to bend before troubles.”

This statement by the Choragos is more cryptic than a simple statement about Antigone’s character. It is a reminder to Creon that her father was the former King of Thebes and a hero to the people. Although Oedipus’ rule ended in tragedy and horror, he did save the city from the curse of the Sphinx, and his memory is still honored among the people. Putting Antigone to death is likely to be viewed as the act of a cruel and impulsive king, and Creon is acting on a slim point of justice if he insists upon carrying out his already harsh decree.

As Ismene is brought out, the Chorus refers to her as a “fond sister,” reinforcing that these are women who have reason to express loyalty in their actions. It is not until Creon, arguing with Antigone and Ismene, insists upon the execution, that they question his actions, asking if he intends to deprive his son of his bride.

Creon doubles down, insisting that he will not have his son marrying a woman who will stand against his orders. The Chorus laments those who would stand against the gods, speaking of the generational curse that has carried forward from Laius on down:

“Thy power, O Zeus, what human trespass can limit? That power which neither Sleep, the all-ensnaring, nor the untiring months of the gods can master; but thou, a ruler to whom time brings not old age, dwellest in the dazzling splendor of Olympus.”

Creon’s Downfall Was His Own Responsibility

At this point, the Chorus is clearly helpless to change Creon’s course of action or fate. They are simply narrators, watching as events unfold. Creon’s refusal to listen to reason dooms him to suffer under the wrath of the gods. As Antigone is led to her doom, they lament her fate, but also blame her temper and folly.

“Reverent action claims certain praise for reverence, but an offense against power cannot be brooked by him who hath power in his keeping. Thy self-willed temper hath wrought thy ruin.”

It is not until Tiresias’ argument with Creon finally breaks through his stubborn refusal to hear the reason that they speak strongly, urging him to go at once and release Antigone from the tomb. By the time Creon acts on their good advice, it’s too late. Antigone is dead, and Haemon, his only son, falls on his own sword. In the end, the Chorus is ineffective in saving Creon from his own hubris.