Pindar was one of the most famous ancient Greek lyric poets, and perhaps the best known of the canonical nine lyric poets of ancient Greece. He was regarded in antiquity as the greatest of Greek poets and the esteem of the ancients may help explain why a good portion of his work was carefully preserved (most of the other Greek lyric poems come down to us only in fragments, but nearly a quarter of all Pindar’s poems survive complete). He is particularly known for his epinicia (or victory odes) in honour of notable personages and winners of athletic games. 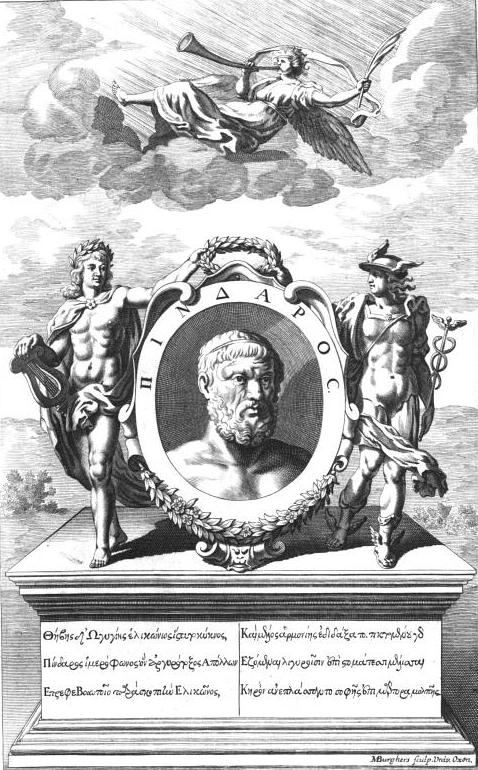 Pindar was born around the year 522 or 518 BCE in the village of Cynoscephalae near Thebes in Boeotia, the son of Daiphantus and Cleodice. His family traced their line to the noble clan of the Aegidae of Thebes, and thence back to the legendary founder of Thebes, Cadmus. He married Megacleia and they had two daughters, Eumetis and Protomache, and a son, Daiphantus.

Although Pindar was probably related to individuals and groups who sided with Persia during the the Medean wars in 490 and 480 BCE, his career does not seem to have suffered much by this association, and, soon after the war, his reputation as a poet spread throughout the Greek world and its colonies. His house in Thebes was deliberately spared by Alexander the Great in recognition of the complimentary works Pindar had composed about and for his ancestor, King Alexander I of Macedon.

Pindar travelled extensively throughout the Greek world to attend to his various patrons, including trips to the court of Hieron of Syracuse in 476 BCE (where he may have met some of the other great poets of the time who were attracted to Syracuse, including Aeschylus and Simonides), to the courts of Theron of Acragas and Arcesilas of Cyrene, and to the cities of Delphi and Athens. Eleven of his 45 odes were written for Aeginetans, which makes it likely that he also visited the powerful island of Aegina.

He had a long and illustrious career. His oldest extant ode dates from 498 BCE, when Pindar was only 20, and the latest is usually dated to 446 BCE, when he was 72. The peak of his literary activity, though, is generally seen as from 480 to 460 BCE.

Pindar wrote many choral works, such as paeans, songs and hymns for religious festivals, known to us only by quotations in other ancient authors or from papyrus scraps unearthed in Egypt. However, 45 of his “epinicia” survive in complete form and these are anyway considered his masterworks. An “epinicion” is a lyric ode in honour of notable personages (such as winners of the athletic games which were so popular in ancient Greece), designed to be sung by a Chorus in celebration of a victory. His extant victory odes are grouped in four books based on the games in which the celebrated winner had competed, the Olympian, Pythian, Isthmian and Nemean games, the most famous being “Olympian Ode 1” and “Pythian Ode 1” (from 476 BCE and 470 BCE respectively).