“Iphigenia in Tauris” or “Iphigenia among the Taurians” (Gr: “Iphigeneia en Taurois”) is a tragedy, although sometimes described as a romance or melodrama, by the ancient Greek playwright Euripides, written sometime between 414 BCE and 412 BCE. It describes the chance meeting of Iphigenia (daughter of Agamemnon and now the priestess of Artemis on the wild shores of Tauris) and her long lost brother, Orestes, and the siblings’ escape from of the local custom of ritual sacrifice. The story follows that of Euripides‘ “Iphigenia at Aulis” by about twenty years, although it was actually written several years earlier. 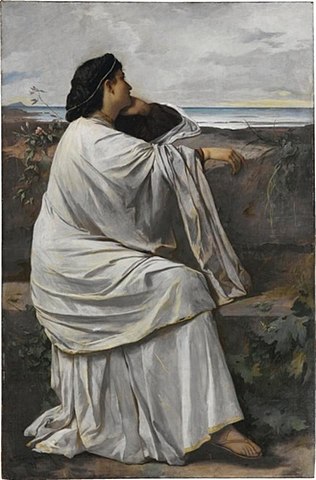 In the prologue to the play, the young princess Iphigenia (Iphigeneia) explains how she had narrowly avoided death by sacrifice at the hands of her father, Agamemnon, when the goddess Artemis, to whom the sacrifice was to be made, intervened and replaced her on the altar at the last moment with a deer, saving her from death and sweeping her off to distant Tauris (or Taurus). There, she has been made a priestess at the temple of Artemis, and given the gruesome task of ritually sacrificing any foreigners who land on the shores of King Thoas’ kingdom of Tauris. She also recounts a dream she has recently had, suggesting that her brother, Orestes, is dead.

Soon after, though, Orestes himself, accompanied by his friend Pylades, enters. He explains how, after being acquitted by the gods and the state of Athens for killing his mother to avenge his father, Apollo has required him to perform one last act of penance, to steal a sacred statue of Artemis from Tauris and bring it back to Athens.

However, they are captured by Taurian guards and brought to the temple to be killed, according to the local custom. Iphigenia, who has not seen her brother since his childhood and believes him dead anyway, is about to commence the sacrifice, when chance causes their relationship to be discovered (Iphigenia plans to use one of the captured Greeks to convey a letter and, after a contest of friendship between the two in which each insists on sacrificing his own life for that of his comrade, it becomes apparent that Orestes himself is the intended recipient of the letter). 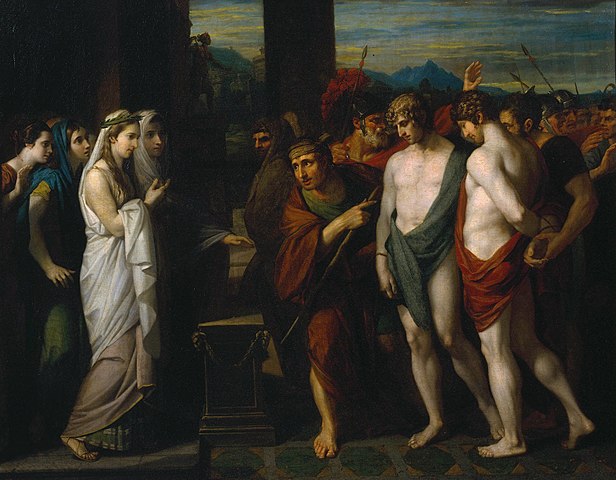 After a touching scene of reunion, they devise a plan to escape together. Iphigeneia tells King Thoas that the statue of Artemis has been spiritually polluted by her murderer brother, and advises him to make the foreigners cleanse the idol in the sea to remove the dishonour that she, as its keeper, has brought upon it. The three Greeks use this as an opportunity to escape on Orestes‘ and Pylades‘ ship, taking the statue with them.

Despite the attempts of the Chorus of Greek slaves to mislead him, King Thoas finds out from a messenger that the Greeks have escaped and he vows to pursue and kill them as their escape is delayed by adverse winds. However, he is stopped by the goddess Athena, who appears at the end of the play to give instructions to the characters. Athena bids the Greeks convey the statue to Greece and establish the worship of Artemis Tauropolus (although with milder offerings substituted for the barbaric human sacrifices) at Halae and Brauron, where Iphigenia is to become a priestess. Awed by the goddess’ show of power, Thoas submits and also frees the Chorus of Greek slaves.

The play was held in high estimation among the ancients (including Aristotle) for its beauty and its magnificent picture of devoted friendship and sisterly affection, and the modern verdict has been no less favourable. The celebrated scene in which Iphigenia is about to sacrifice her brother just as they are on the very brink of mutual recognition, with its long suspense and the various unexpected turns of fortune, and then the ecstatic joy of the revealed brother and sister, constitute one of the greatest triumphs of dramatic art. The story has been much imitated, most notably by Goethe in his drama “Iphigenie auf Tauris”.

By Euripides‘ time, the legends of human sacrifices to a goddess known as Artemis Tauropolus (also known by the names of Hecate and, confusingly, Iphigenia), the religious practices of the Tauri people of the wild and distant Crimea region of the Black Sea, and the existence of a daughter of Agamemnon also called Iphigenia, had become hopelessly confused and intertwined. By combining and rearranging the tangled threads, and by adding fresh inventions of his own, Euripides was able to produce a striking legend and one of the finest of his plots. Indeed, the three constituent elements of the legend (the old Greek ceremonies, the Tauric worship and the traditions about Iphigenia) are rescued from their previous confusion and combined into a plausible and connected story, while at the same time throwing the odium of the primitive form of sacrifice firmly onto the barbarians and foreigners.

To a modern audience, however, there is very little dramatic intensity in “Iphigenia in Tauris” and it seems a strange combination of tragedy and romance: although tragic conditions precede the events of the play and tragic events almost happen, no one actually dies or ends in misfortune in the play. It is perhaps better described as “romantic melodrama”.

It was written around the same time as Euripides‘ “Helen”, and the two plays show some close correspondences, such as the mutual recognition of near relatives after a long absence (the mistaken identity of both Iphigenia and Orestes constitutes much of the dramatic irony of the play); the outwitting of a barbarian king by a Greek heroine (always a popular element for Greek audiences); and the timely intervention of a deity as a “deus ex machina” just as the doom of the chief characters seems inevitable. Of the two, “Iphigenia in Tauris” is considered the better and more interesting play, though, and it has enjoyed a well-deserved popularity.

Euripides was known for his striking portrayals of female characters, and Iphigenia is no exception, although she perhaps lacks the dramatic depth of his Medea and Electra. She is haughty and proud; she longs for her own culture, and yet she vehemently hates her countrymen for what they did to her; she is daring, cool and passionate, and it is her quick thinking and formidable bearing that facilitate their ultimate escape.

The main themes of the play are the comradely and brotherly love and friendship of Orestes and Pylades and the familiar love between the siblings Orestes and Iphigenia. The theme of sacrifice also dominates the play, especially as it holds a double bind over Iphigenia, in that she was to be sacrificed by her father as homage to Artemis, and was then “rescued” by that goddess and made to serve in her temple, preparing the ritual sacrifice of others.