“Helen” (Gr: “Elene”; Lat: “Helena”) is a tragedy by the ancient Greek playwright Euripides, first produced in 412 BCE for the annual Dionysia competition in Athens. Although technically a tragedy, it is perhaps more of a romance or melodrama, like several of Euripides‘ later plays, and it shares much in common with his “Iphigenia in Tauris”, which was written around the same period. The plot of the play follows an alternative myth of Helen of Sparta and her reunion and escape from Egypt with her husband, King Menelaus, after the fall of Troy. 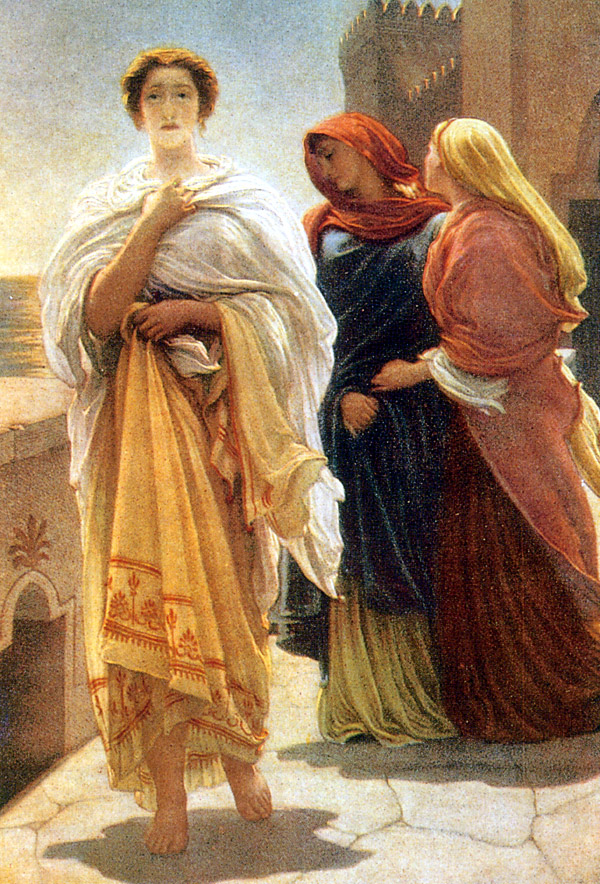 The Spartan queen, Helen, who has languished for years in Egypt while the events of the Trojan War and its aftermath played out, learns from the exiled Greek Teucer that her husband, King Menelaus, has drowned on his return from Troy. This now puts her in the position of being available for marriage, and Theoclymenus (now the king of Egypt after the death of his father, King Proteus) fully intends to take advantage of the situation. Helen consults Theonoe, the king’s sister, in an attempt to confirm her husband’s fate.

Her fears are allayed, however, when a stranger arrives in Egypt, and turns out to be Menelaus himself. The long-separated couple recognize each other, although at first Menelaus does not believe that she can be the real Helen, since the Helen he knows is safely hidden away in a cave near Troy.

Here it is finally explained that the woman Menelaus was shipwrecked with on the journey back from Troy (and whom he had spent the last ten years fighting for) was in reality only a mere phantom or simulacrum of the real Helen. The story is told of how the Trojan prince Paris had been asked to judge between the goddesses Aphrodite, Athena and Hera, and how Aphrodite had bribed him with Helen as a bride if he would judge her the fairest. Athena and Hera took their revenge on Paris by replacing the real Helen with a phantom, and it was this simulacrum that was carried off to Troy by Paris while the real Helen was spirited off by the goddesses to Egypt. One of Menelaus‘sailors confirms this unlikely sounding story when he informs him that the false Helen has suddenly disappeared into thin air. 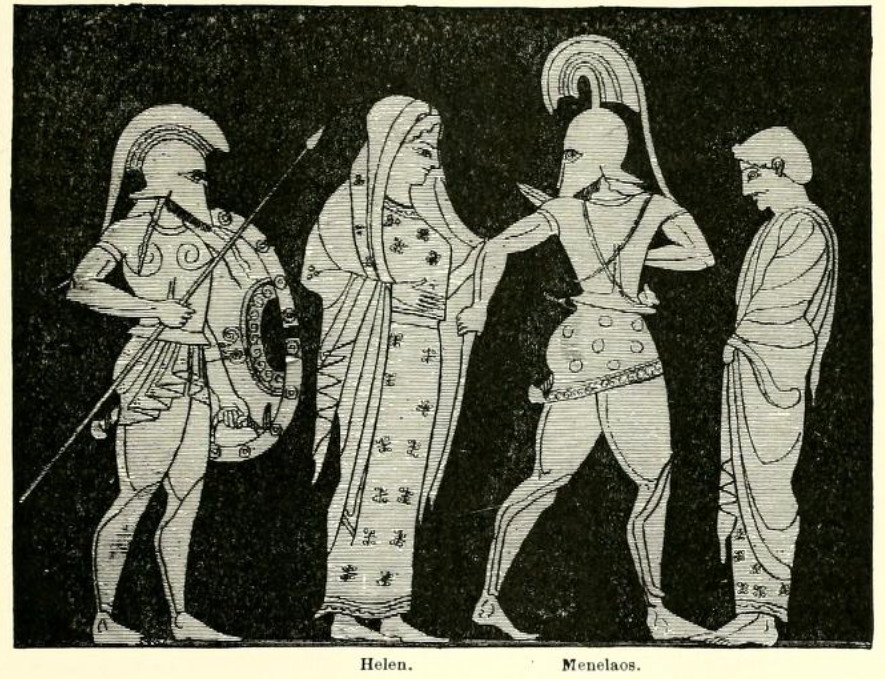 Finally reunited, then, Helen and Menelaus must now devise a plan to escape from Egypt. Taking advantage of the still current rumour that Menelaus has died, Helen tells King Theoclymenus that the stranger who came ashore was a messenger sent to confirm her husband’s death. She suggests to the king that she can now marry him as soon as she has performed a ritual burial at sea, symbolically freeing her from her first wedding vows. The king goes along with this scheme, and Helen and Menelaus use the opportunity to escape on the boat given to them for the ritual.

Theoclymenus is furious when he learns how he has been tricked, and almost kills his sister Theonoe for not telling him that Menelaus is still alive. However, he is prevented by the miraculous intervention of the demi-gods Castor and Polydeuces (Helen‘s brothers and the sons of Zeus and Leda).

This variant on the myth of Helen is based on a story first suggested by the Greek historian Herodotus, some thirty years before the play was written. According to this tradition, Helen of Sparta herself was never carried off to Troy by Paris, only her “eidolon” (a phantom look-alike or simulacrum created by Hermes on Hera’s orders). The real Helen was actually whisked away to Egypt by the gods where she languished throughout the years of the Trojan War, under the protection of King Proteus of Egypt. There she remained ever loyal to her husband King Menelaus, despite the the curses on her from the Greeks and Trojans alike for her supposed infidelity and for sparking the war in the first place.

“Helen” is a distinctly light play with little of traditional tragedy about it, and is sometimes classified as a romance or melodrama, or even as a tragi-comedy (even though in ancient Greece there was really no overlap between tragedy and comedy, and the play was certainly presented as a tragedy). It does however contain many of the plot elements which classically defined a tragedy (at least according to Aristotle): reversal (the real and the false Helens), discovery (Menelaus‘ discovery that his wife is alive and that the Trojan War had been fought for little or no reason) and calamity (Theoclymenus’ threat to kill his sister, even if unrealized).

The convention of tragedy was also to portray characters of high and noble birth, particularly well-known figures from myths and legends (as opposed to comedies which usually focus on normal or low-class characters). “Helen” certainly fits that requirement for tragedy, Menelaus and Helen being two of the most renowned figures of Greek myth. However, Euripides turns the tables to some extent (as he does so often in his plays) by showing the high-born Menelaus dressed in rags and forced to beg for food (and even running the risk of being thrown out by an old slave woman at one point). Similarly, although Theoclymenus is initially established as a cruel tyrant, he actually turns out to be something of a buffoon and a figure of ridicule. 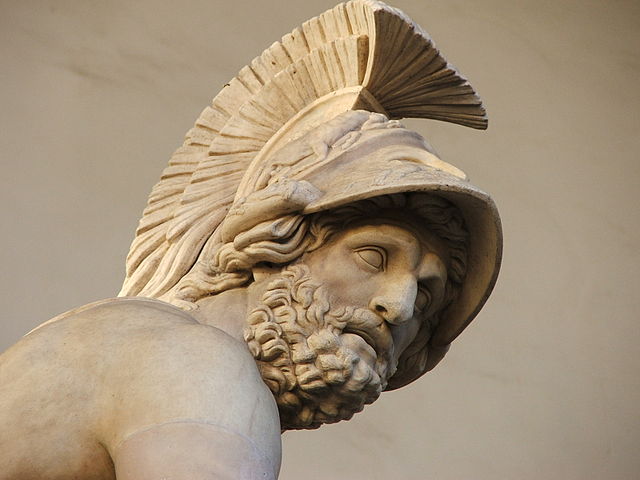 Euripides also gives two of the most profound observations in the play to lowly slaves: it is a slave who points out to Menelaus that the whole of the Trojan War had in fact been fought for no reason at all, and it is another slave who tries to intervene when Theoclymenus is about to kill Theonoe. The presentation of a slave as a rightous and moral character undermining the authority of his master is rare in tragedy (although less rare in Euripides, who is well known for breaking conventions and using innovative techniques in his plays).

The play has a generally happy ending, although this does not in itself prevent it from being classified as a tragedy, and a surprising number of ancient Greek tragedies do have happy endings (likewise, a comedy is not necessarily defined by a happy ending). The happy ending has some dark connotations, though, with the disturbingly needless slaughter by Menelaus of the unarmed men on the escape ship, and the sinister moment when Theonoe is almost killed by her brother in retribution. The plot contrivance of Helen and Menelaus‘ trickery and their escape on a ship is almost identical to that used in Euripides‘ play “Iphigenia in Tauris”.

Despite some comic touches in the play, though, its underlying message – its disturbing questions about the pointlessness of war – is very much tragic, particularly the realization that ten years of war (and the consequent deaths of thousands of men) was all for the sake of a mere phantom. The tragic aspect of the play is also enhanced by the mention of some more personal collateral deaths, such as when Teucer brings Helen the news that her mother, Leda, has killed herself due to the shame her daughter has brought, and it is also suggested that her brothers, the Dioscori, Castor and Polydeuces, committed suicide over her (although they became deified in the process).